Comics played a very important role in the total mobilization in Italy. Firstly in the cities and then in the trenches, they were a new propaganda tool and explanation of the war for children and soldiers with low literacy. At the same time, the war changed the history of comics and the magazine market for children and youth

The relations between comics and history - the history of comics and the presence of comics in history - have been the focus of numerous and at times quite meticulous research projects by Anglo-Saxon and francophone scholars; to a lesser extent, the same is true in Germany, where the market for comics is comparatively marginal. In Italy, however, the intersection of comics and history has never been subjected to a systematic study. Educators, semioticians, linguists, experts of mass communication, and sociologists (not to mention collectors and amateurs) have produced a wealth of interesting essays, each in their own specific field of expertise. However the potential for an interdisciplinary synthesis that has benefited historical research on mass media and other sources is still largely unexploited.[1]

One of the few available works on the history of the historiography of comics in Italy highlights the dearth of recent studies on the distinctive characters, the specific features, the transformations, and the social impact of comics in contemporary Italy. This particular history is “yet to be written.”[2] As a matter of fact, historians of the contemporary age have long disregarded a type of source that has much to tell us about the mechanisms of war propaganda, the more or less successful attempts to nationalize the masses throughout the 20th century, and the relations between the state, the editorial market, and mobilized or demobilized societies in the extended aftermath of both world wars.

More generally, the centrality of comics to cultural and social history (and to the history of publishing) continues to be ignored by most scholars in spite of growing scientific interest in issues such as the mobilization of children, the nationalization of the “people in infancy”, a few selected periodicals for children like the “Corriere dei Piccoli”, and the relation between comics and fascism. Over the last few years, however, a growing body of innovative work in this field has begun to shape a distinctive new current.[3]

Through the whole 20th century, comics had a critical impact on the education and literacy rates of generations. Still, historians have consistently underrated or dismissed them as sources, even in the most detailed studies of the long-term construction of social consensus and education in patriotism and citizenship.[4]

In the new technologically advanced mass conflict it was no longer possible to wage a war without spreading hate and mobilizing the younger generations.[5] Italy entered the war in 1915, after a year of virulent struggles and clashes between the interventionist front and the neutralist faction.[6] When the neutralists had been silenced and war was eventually declared, building consensus proved to be much harder than elsewhere. Italian authorities had to deal with a characteristic deficit of national identity, and they attempted to do so by subjecting a country that would never experience the likes of a 1914 “Community of August” to renewed patriotic pedagogy.

The “Corriere dei Piccoli”, a supplement to the newspaper “Il Corriere della Sera”, was founded in 1908. This new publication greatly contributed to building consensus for war by mobilizing a younger readership. As the war with Turkey had shown, the readers of “Corriere dei Piccoli”, who were much more numerous than the audience of other periodicals for children such as “Il Novellino” and “Il Giornalino”, were a strategic target. During the conflict, the print run was doubled, and 19th century publications for children, formerly vehicles for the moral values of Risorgimento, all but disappeared.

Starting in the summer of 1914, the “Corriere dei Piccoli” began to run articles and stories featuring new or restyled characters that mimicked the imagery and rhetoric of the Risorgimento and were presented as role models.[7] In these early weeks, graphic narrations and comic panels showed a wide range of exemplary behaviour and interpretations aimed at integrating children into the patterns of wartime mobilization, transforming them into little soldiers deployed on the inner front. Such beloved characters as Schizzo, Luca Takko and Gianni, Tofoletto, Abetino, and the female heroin Didì were suddenly operating on the front during battles and armed clashes, leading their allies and friends to victory. In other instances, they were bravely sacrificing themselves in the rear, particularly in mobilized cities and the countryside.

From Cities to Trenches↑

Authors such as Antonio Rubino (1880-1964), Attilio Mussino (1878-1954), Gustavo Rosso (1881-1950), and Mario Mossa de Murtas (1891-1966) drew on well-experimented languages in their attempts to establish the grammar and the style of expression that would distinguish Italian comics for decades to come.[8] Their work was immediately exploited in trench journals. After the defeat at Caporetto, of which nothing was said in the weeklies, comics changed in style or were put on stand-by. During the last and most dramatic year of the war, the most talented authors for children had moved on to work for trench journals, under the direct supervision of the propaganda department of the army. By collaborating with war periodicals such as “La Tradotta”, the press organ of the III Army, and “La Ghirba”, printed by the V Army, well-established and experienced comic artists played a fundamental role in the rise of mass journalism in Italy.[9] Comic panels were numerous. In other words, from the very start, comics played an important role in the history of the press and the rise of literacy in 20th century Italy. Graphic narration - modelled on the “Corriere dei Piccoli” and combining the vilification of the enemy with motifs of the traditional popular press[10] - proved to be much more effective than purely text-based propaganda, since the army of the kingdom of Italy was for the most part illiterate and only imperfectly nationalized.[11]

With the downfall of the Central Powers, the Italian fumetti continued to represent and interpret domestic and foreign political affairs: demobilization, the gendered tensions between unemployed male veterans and women workers hired during the war, the events leading to the expedition to Fiume etc.[12] Later, in Benito Mussolini’s (1883-1945) Italy, the Great War, presented as the spark that had kindled the fascist revolution, was rarely featured in comic books dealing with major episodes of national history and in periodicals for young readers, whose “golden age” was the 1930s. 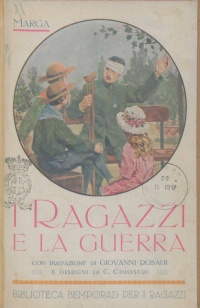 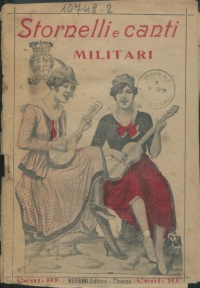 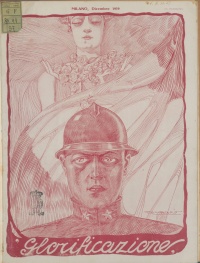 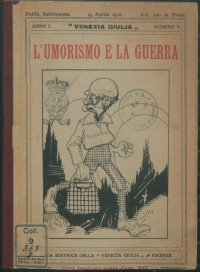 Cartoon of Francis Joseph I 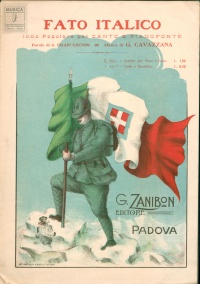 Music for voice and piano