The latter Austrian Land Vorarlberg saw the rise of a grass root movement for a political union with Switzerland between autumn 1918 and spring 1919. These ideas never materialized, however, as the Paris Peace Treaties vetoed their realization.

From a Habsburg Crown Land to an Independent State↑

When the last Austro-Hungarian Emperor, Charles I, Emperor of Austria (1887-1922) resigned, the provisional assembly of German-Austria declared itself a republic and part of the greater German Republic on 12 November 1918. A week before, on 3 November 1918, the most Western Habsburg crown land, what was later known as the Austrian province of Vorarlberg, declared its independence. The small country shared a common border with Switzerland in the west, Germany in the north, Liechtenstein in the south and the Tyrol in the east. Since the mid-19th century it had been part of a greater administration complex with the Tyrol. With the Austro-Hungarian constitution of 1861 the small state was assigned its own local parliament and some political independence. For example, in 1898 a regional bank and Vorarlberg Archives were founded, and in 1905 the Vorarlberg government (Landesausschuss) opened its own local food research institute. Nevertheless, self-government was only rudimentary and could not keep pace with the fast and successful industrialisation of the country.

The 1870s and 1880s saw the opening of two central railways that connected Vorarlberg with Austria, Germany and Switzerland. The connection to Austria proved to be especially important, because it opened the large market of the Habsburg Empire to local industry. Taking into account human and natural resources, Vorarlberg industrialisation is best described as a “textilisation”. Up into the 1970s the majority of its industry was linked to embroidering, knitting or weaving. The impulse to enter on the road to a textile-based industry came from dealers in St. Gallen in the 18th century.

From an Independent State to a Swiss Canton?↑

In the new state, people perceived Switzerland as the place that offered work and would bring them money. The movement for a union with Switzerland arose in the autumn of 1918, and may have profited from such a positive connotation with this neighbouring country. In early November 1918, Ferdinand Riedmann (1886-1968), a Conservative and Soviet[1] in the k.u.k. army in Linz and a trained teacher from Vorarlberg, delivered a speech amongst his comrades in the Upper Austrian capital in which he demanded a union of Vorarlberg with Switzerland. A few days after the cease-fire with Italy, he arrived in his home province and started campaigning towards this goal.

Riedmann had the support of local craftsmen and tradesmen, small entrepreneurs and petit bourgeois intelligentsia, however, the Labour Party and the Liberal Party were against the proposal. Riedmann collected the signatures of 71 percent of the Vorarlberg electorate in favour of a union with Switzerland. In March 1919, he passed on his petition to the provisional provincial government. It was led by the Conservative Party, which had won the first democratic elections to local parliament in April 1919 with a majority of 64 percent. The government called for a referendum on 11 May 1919. The question to decide was if the Vorarlberg government should start negotiations with the Federal Swiss government about joining the Swiss Confederation. 80 percent of the voters approved of negotiations. Only three out of ninety-six municipalities saw a majority in favour of the status quo, i.e. remaining part of the Austrian Republic.

However, the new Austrian republic did not accept that any of its provinces should leave the young federation; neither did the Entente powers, nor, in regard to Vorarlberg, the Swiss government. France was especially concerned that if one Austrian province should break away others might follow and strengthen Germany by uniting with it.

Public and political opinion in Switzerland about an additional Catholic canton with strong rural links and a monopolised industry joining the Swiss Confederation was ambiguous. Some, especially conservatives such as Gonzague de Reynold (1880-1970), supported the idea and founded a so-called Pro Vorarlberg movement in Switzerland. Its goal was a popular initiative for a union. 50,000 signatures would have been required to move this idea forward, but Pro Vorarlberg only collected 29,000. Nevertheless, the campaigning went on until the mid-1920s when it petered off in both Vorarlberg and Switzerland. Within the Swiss Federal Government, only one out of seven members strongly favoured Vorarlberg joining the Swiss Confederation. This was Felix Calonder (1863-1952), Minister for Foreign Affairs. However, he failed in his efforts as Pro Vorarlberg had done previously. Switzerland did not fail in regard to the humanitarian aid that it offered to Vorarlberg: from November 1918 until the summer of 1919 it delivered between thirty-eight and forty-six coaches of luxury goods every fortnight into Vorarlberg. This enabled the local government to avoid a serious famine. 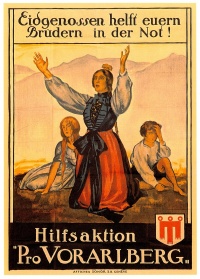 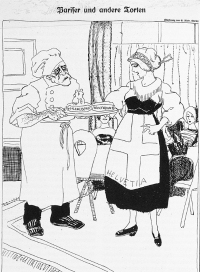