Voices in the Storm (journal)

“Stimmen im Sturm” was a Swiss cooperative which published nine issues with decidedly Germanophile content. They not only defended the German war effort, but also argued against the French and the Swiss French side. The journal came up against heavy critique.

The short-lived cooperative, or publishing association “Voices in the Storm” (“Stimmen im Sturm”) was led mainly by the protestant vicar Eduard Blocher (1870-1942). The association published nine texts in total. The authors, as well as the comparatively small group of supporters, believed that, with the beginning of the war, the Germans and their empire were unfairly judged as sole initiators of the war. They felt that the press of the French speaking part of Switzerland was launching an unjust attack on the Germans, to whom they felt strong ties. Others described them as “Germanophiles” but they did not use this description for themselves. The men behind “Stimmen im Sturm” held the view that the German people did not belong to one nation alone but that the Swiss Germans were in fact Germans too. However, they never sought annexation to the German Empire. The views stated in published issues were not only Germanophile but decidedly Francophobic with xenophobic and anti-Semitic tendencies.

At the beginning of the war, most Swiss Germans stood by the Central Powers, while most Swiss French sympathised with the Entente. Furthermore, the French speaking population of Switzerland experienced a pronounced feeling of loss of influence. This was seemingly substantiated by the extensive powers of authority with which the Swiss Federal Council was endowed and by new federal structures and reduced political instruments. In addition, of the Federal Council's seven members, only one was of Swiss French origin and the leading men in the Swiss army were all Swiss Germans. These facts contributed to a certain distrust in the French and Italian speaking parts of Switzerland and to a rift between the different linguistic and cultural regions.

However, some intellectuals felt that they needed to step in before the rift grew wider. In a famous speech in December 1914, the author Carl Friedrich Georg Spitteler (1845-1924) talked of the dangers of this division and spoke out for the unity of Switzerland, arguing that the nation was more than just several linguistic regions. At the time of this speech, a few intellectuals in the French speaking part endorsed Spitteler’s view. The efforts of these persons, however, were ill-received by the “Deutschschweizerische Gesellschaft” (Swiss German Association). This association argued that a strong bond to German language and culture existed in Switzerland and that this bond needed to be sustained. The immediate reaction of the association was the creation of the cooperative “Stimmen im Sturm”. This publishing association was founded on the initiative of the pastor Eduard Blocher and meant to publicise the thoughts of this interest group. Most of the individuals involved were members of the “Deutschschweizerische Gesellschaft”. Their supporters were theologians such as Hans Baur (1870-1937), solicitors including Fritz Fick (1871-1929), university professors such as Paul Wernle (1872-1939), Hermann Bächtold (1882-1934), and Christian Beyel (1854-1941), authors, for example Ernst Zahn (1867-1952), engineers, architects including Alexander von Senger (1880-1968), editors such as Georg Baumberger (1866-1935) and journalists. The sons of General Ulrich Wille (1848-1925) and of the general chief of staff of the Swiss army were also prominent members.

“Stimmen im Sturm” consisted of nine issues, which were written by different authors, one of whom remained anonymous. The circulation figure varied. No more than a few thousand copies of each issue were published. Three major subjects were covered by “Stimmen im Sturm”: defense of the partisanship of Swiss Germans for the German empire, legitimation of German conduct during the war and attacks against the French as well as against the French speaking part of Switzerland. The journal wielded little influence, even though the press commented on the issues heavily at the time. The issue of November 1915, written under the pseudonym Hans Meier and titled “Deutschfeindliche Bewegungen in der französischen Schweiz” (“Anti-German Movements in French Switzerland”), led to especially heated debates in the press. Even Arthur Hoffmann (1857-1927), a member of the Federal Council, publicly criticised “Stimmen im Sturm” in his report regarding Switzerland’s censorship. He regretted that neither the censor nor the Federal Council could intervene against the publication. He denounced it as inflammatory. After 1916, no further issues were published. 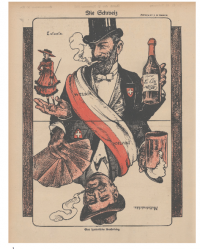