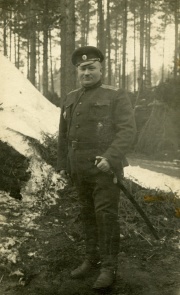 Jukums Vācietis commanded the 5th Zemgale Latvian Rifle Battalion. After the October Revolution he sided with the Bolsheviks and became the first commander-in-chief of the Soviet Armed Forces.

Jukums Vācietis’ (1873-1938) support for the Bolsheviks following their coup in October 1917 has largely conditioned the attitude of historians towards his life and career. Vācietis explained his choice in the book Latvian Riflemen’s Historical Importance (1922-1924), in which he maintained that only the Bolsheviks’ victory gave Latvia a chance to avoid being reincorporated into the restored Russian Empire and to instead gain independence. Nevertheless, historians of interwar Latvia did not view the Latvian Red Riflemen positively. The consensus was that Latvian soldiers’ deaths were wasted because of Vācietis’ choices. Uldis Ģērmanis published the first scholarly biography of Vācietis in Stockholm in 1974 during his exile, although a biography had been published in Soviet Latvia in 1973. Since then, no monograph has been published on this topic.

In 1897, Vācietis started his career in the Kaunas fortress garrison before being transferred to the Riga Non-Commissioned Officers Battalion in 1902. In December 1905, Vācietis was promoted to the rank of staff captain (Stabskapitän). In 1906, he joined the prestigious Nicholas General Staff Academy in Saint Petersburg. After graduating in 1909, Vācietis served in Kaunas and Daugavpils. In 1912 he was promoted to lieutenant colonel and later on moved to the 102nd Vjatkas Infantry Regiment in Grodno as battalion commander.

In summer 1914, the 102nd Regiment fought in battles against the German army in East Prussia and later in Poland. In November 1914, the regiment found itself encircled by the Germans. In the course of his escape, Vācietis injured his leg badly and received hospital treatment until 15 February 1915. He subsequently lectured on military tactics in Vilnius Military School. In November 1915, he was appointed commander of the 5th Zemgale Latvian Rifle Battalion, which was renamed Regiment at the end of 1916. Soon afterwards he was promoted to colonel.

The 5th Zemgale Latvian Rifle Battalion took part in battles in March 1916. On 5 January 1917 the Latvian Riflemen were ordered to break through the German positions without needed support from the artillery. The Riflemen succeeded but incurred enormous losses, and the 12th Russian Army had no reserves to take advantage of their success. In Latvian social memory the Christmas Battles, as they came to be called, still symbolize the Latvian riflemen’s bravery. They also left a deep mark on Vācietis.

After the February Revolution, Vācietis publicly expressed his belief that Latvia had the opportunity to gain its freedom from Russian control. Such a view was very progressive at the time. Vācietis was against fraternization with German soldiers, which Bolsheviks actively praised. Unlike many other officers, he did not get involved in the activities of the Union of Latvian National Soldiers.

In early September 1917, two regiments of the Latvian Riflemen – the 6th Tukums Rifle Regiment and the 5th Zemgale Rifle Regiment – were engaged in a twenty-six-hour effort to prevent German military forces from crossing the river Daugava near Maza Jugla. The Latvian Riflemen suffered extremely serious losses but saved the 12th Russian Army from German encirclement. Vācietis commanded one regiment. In a book about the historical significance of Latvian riflemen, Vācietis argued that they alone offered a serious defence of Riga.

In November 1917, Vācietis led the liquidation of the 12th Russian Army Headquarters in Valka. For a short period he served as commander of the 12th Army, before being appointed head of the operations unit of Soviet Russia’s Revolutionary Field Headquarters. Early in 1918, he became commander of the Latvian Riflemen. His first task was to suppress the uprising of the 1st Polish Corps in Belarus. In April 1918 he was appointed commander of the Latvian Soviet Riflemen Division of the Red Army. On 6 and 7 June 1918, Vācietis played the lead role in suppressing the Socialist Revolutionaries (so called “Esers”) revolt in Moscow, thereby saving the Soviet government.

On 18 July 1918, Vācietis was appointed commander of the Eastern Front to lead the campaign against Czechoslovak Corps and allies in Russia. However, even with the 12th Latvian Rifle Regiment’s assistance, the chaos in Kazan continued. Between 2 September 1918 and 25 June 1919, Vācietis served as the first commander-in-chief of the Armed Forces of Soviet Russia. He also commanded the Army of Soviet Latvia from January to March 1919. On 25 June 1919, the Cheka arrested Vācietis for taking part in a “counterrevolutionary White Guard organization” and for expressing nationalistic beliefs. On 7 October 1919, the All-Russian Central Executive Committee suspended the case and placed Vācietis in charge of the Military Department. After being assigned to the Revolutionary Military Council, he assumed no military command.

Vācietis was hired as a member of the teaching staff at the General Staff Military Academy of the Red Army (from 1921, the Academy of the Workers’ and Peasants’ Red Army; from 1927, named after Mikhail Frunze (1885-1925)). In 1927, he was appointed senior professor of war and warfare. Vācietis lectured on war history and social military psychology. He never joined the Communist party. In the 1920s, Vācietis hoped to return to Latvia, but only his wife and three children succeeded in doing so in September 1921.

In autumn 1935, Vācietis was assigned the personal rank of the 2nd rank of army commander. He also earned several high military honours. On 29 November 1937, Vācietis was arrested and charged with being a participant of a “Latvian fascist organization” in the Red Army. On 28 July 1938 he was sentenced to death by shooting; the sentence was carried out the same day in Komunarka (Moscow district). Vācietis’ military honours were posthumously reinstated in March 1957.