During the war, the Germans created a Flemish university in Ghent. By doing so, they fulfilled one of the Flemish movement’s principal demands.

The Struggle for Flemish Culture↑

In the second half of the 19th century, Flemish intellectuals such as Julius MacLeod (1857-1919), Lodewijk De Raet (1870-1914) and August Vermeylen (1872-1945) focused on achieving the acknowledgment of Flemish culture and language in Belgium. They viewed the creation of a Flemish-language university as a mandatory step in the constitution of a true nationalist movement. Through petitions, scientific congresses (Nederlandsch Taal- en Letterkundige Congres) and the creation of two commissions (Hogeschoolcommissie in 1896 and 1907), they succeeded in establishing a large support group within Flemish scientific circles. Higher education in Dutch was necessary to bring Flanders cultural, social and economic emancipation.

However, the goal of a Flemish-language university met with opposition on the part of French speakers, who felt this would sever students from the international scientific scene. Their arguments were relayed by the Union pour la défense de la langue française (Union for the defence of the French language) in Ghent and by Catholic Church authorities. In November 1912, members of the liberal, Catholic and socialist parties put a law before the Chamber of Representatives aiming at progressively introducing Dutch at Ghent University starting in 1916-1917. However, when the war broke out the project still had not been discussed in parliament, causing great disappointment among the Flemish.

Creation of a Flemish University in Ghent↑

The Germans realized that the Flemish intellectuals were frustrated. In order to destabilize Belgium (using the “divide to conquer” strategy), they allowed something the Belgian government had not yet managed to create: a Flemish university in Ghent. The academic year officially opened on 24 October 1916 in the presence of German Governor-General Moritz von Bissing (1844-1917) and numerous uniformed high-ranking German officers. Opponents would therefore quickly refer to the new institution as the von Bissing University, in order to highlight the fact that it had been created by the occupier.

The educational body consisted of several professors who had taught at the university before the war, young Flemish intellectuals and a handful of foreign professors, primarily German and Dutch. About forty students enrolled the first year. Some were truly convinced of making the right choice, others only enrolled in order to escape forced labour in Germany. The creation of this ardently desired Flemish university led some to believe that the German occupier was truly concerned with Flemish requests.

This “success” pushed numerous intellectuals – even some of the well-known and respected ones, such as lawyer Lodewijk Dosfel (1881-1925) – to collaborate with the Germans. On the other hand, the Flemish who were opposed to any form of collaboration protested openly. Thirty-eight of them, led by Louis Franck (1868-1937), a lawyer and liberal politician, published an open letter to Chancellor von Bissing. Two eminent professors who refused to have anything whatsoever to do with the Flemish university, Paul Fredericq (1850-1920) and Henri Pirenne (1862-1935), were deported to Germany. The Belgian government in Le Havre bluntly condemned the enemy construction. It promised to set up higher education in Flemish after the war, refused to recognize the degrees and sanctioned employees for assisting the enemy. The university ran for two academic years (1916-1917 and 1917-1918) but had to close its doors after the German defeat.

The University During the Interwar Period↑

As soon as Belgian authorities returned, the Flemish university was closed down and both its professors and students were condemned or forced into exile. However, the Belgian government had indeed understood that a Flemish university was a necessity. In his address on 22 November 1918, Albert I, King of the Belgians (1875-1934) promised higher education in Dutch. This was reached in successive steps. In order to please French speakers, classes were initially split into two language sets, but in 1930 the university became exclusively Flemish. This evolution was not to the liking of French speakers, who then in September 1924 created the Ecole des Hautes Etudes (School for Higher Education) in order to maintain French education in Ghent during the interwar period. Rallies, student scraps or conflicts with academic authorities regarding education were common all through the interwar period and testified to the growing impact of Flemish nationalist ideas in public opinion. 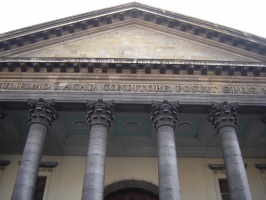 Aula of the Ghent University