Founded in Lyon in February 1918, the Union fédérale was the largest veterans’ association in interwar France. It campaigned for the improvement of veterans’ pensions and for the involvement of ex-servicemen in government. It was also a prominent member of the international veterans’ community, promoting rapprochement with Germany.

With nearly 1 million members by 1939, the Union fédérale (UF) was the largest veterans’ association in interwar France. It was founded in Lyon in February 1918 as a federation of provincial veteran and war-wounded (mutilés) associations. Its recruitment was not restricted to men who had seen active service during the war – the UF had several women in its leadership. The association produced three national publications – La France mutilée, Cahiers de l’UF and Notre France – as well as editing its own version of the Journal des mutilés et réformés, the only veterans’ newspaper available at newsstands. The UF was active in the international veterans’ community. It favoured rapprochement with Germany through the Conférence intenationale des associations de mutilés et anciens combattants, and counted future Nobel Peace Prize winner René Cassin (1887-1976) amongst its leading members.

Like all French veterans’ associations, the UF campaigned ceaselessly for the improvement of veterans’ pensions and for the involvement of ex-servicemen in government. The most prominent figure in the association was Henri Pichot (1884-1945), who became its president in 1934. Under Pichot, the UF remained close to the democratic Radical Party and, unlike its rival, the Union nationale des combattants (UNC), rejected collaboration with the extreme right. However, as war approached and the French Third Republic faltered, the UF gave its backing to the UNC’s campaign for an authoritarian regime under Marshal Philippe Pétain (1856-1951). In August 1940, the UF was incorporated into Vichy France’s Légion française des combattants. 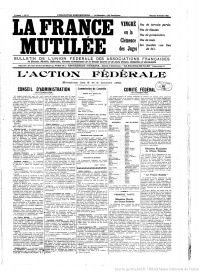 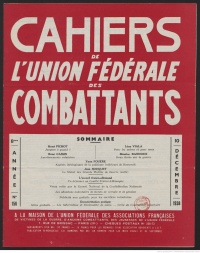 Journal of the Union fédérale, 6 December 1938 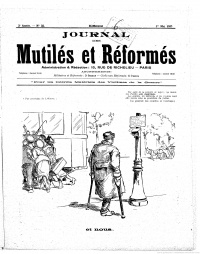