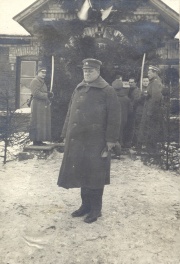 Kārlis Ulmanis was the first prime minister of the Republic of Latvia. His four terms of office saw the successful conclusion of the Latvian War of Independence.

Historians have paid little attention to Kārlis Ulmanis (1877-1942) in the context of World War I. This is true both of historians in Soviet Latvia (1940-1941; 1944-1991) and following Latvian independence. The Latvian historian Edgars Dunsdorfs (1904-2002) published the most extensive work on Ulmanis in 1978 during his exile. Most of the relevant studies published after 1991 concentrated on Ulmanis’ final years and both his authoritarian rule and the loss of state independence.

A Long Path to Politics↑

In 1896, Ulmanis graduated from the Jelgava secondary school. He studied agronomy at the ETH (Eidgenossische Technische Hochschule) Zurich from 1902 to 1903, then continued his studies at the Institute of Agriculture at Leipzig University in Germany from 1903 to 1905. During this time, Ulmanis gave lectures on agriculture. In 1905, he also began editing agricultural periodicals. His article about the Russian army’s punitive expeditions intended to suppress the Revolution of 1905 led to his imprisonment in Pleskava from 1905 to 1906. Upon release, he went to Germany and in 1907 traveled to America.

Ulmanis graduated from the University of Nebraska-Lincoln Industrial College of Agriculture in 1909 with a Bachelor of Science and Agriculture degree. After receiving amnesty, he returned to Latvia in 1913 and worked as an agronomist in the Baltic Farmers Association. In 1915, Ulmanis became an instructor in the Agricultural Association of Riga, where he quickly gained popularity among the farming community.

The refugee movement caused by World War I opened up opportunities for a different kind of community service. In spring 1915, the German army invaded Courland. Approximately 400,000 people left their homes, taking millions of farm animals with them to safety. Representatives from Latvian societies established a network of requisition committees to re-purchase livestock and agricultural products from refugees. Ulmanis was closely involved in these initiatives. He was appointed manager of the ministerial branch at the Refugee Relief Committee of Valmiera and was therefore responsible for the labor branch, which provided jobs for people. Soon afterwards the Agricultural Association of Riga established the Baltic Refugee Relief Committee, electing Ulmanis to its board. He thereby acquired experience as a fledgling politician.

The 1917 February Revolution in Russia accelerated political developments. The newly formed Livland Provisional Territorial Council elected Ulmanis as deputy provisional commissar of Livland. He contemplated the idea of establishing a farmers’ party, finally doing so through the Agricultural Association of Riga. Ulmanis became the first chairmen of Latvian Farmers’ Union.

The military and political situation changed in September 1917. The German army’s offensive led to the capture of Riga on 3 September 1917. All democratically elected authorities were abolished. Ulmanis became involved in the Democratic Bloc that supported Latvia’s independence. By 11 November 1918, Ulmanis had already emerged as a leading political figure. He actively participated in the formation of the Popular Council that declared the Republic of Latvia on 18 November 1918 and was invited to form the government. The Latvian War of Independence commenced shortly afterwards.

In November 1918, the German army still controlled Latvia, but was challenged by the Red Army in December. The Red Army captured Riga on 3 January 1919. Ulmanis’ government evacuated to Liepaja. Ulmanis assumed the various roles of minister of foreign affairs (November 1918 – June 1919), of agriculture (November - December 1918; July – September 1919), of relief (November 1918 – December 1919), and of defense (October 1919 – June 1920). In an attempt to secure foreign assistance, he visited Denmark, Sweden, Estonia, Germany and Lithuania. On 16 April 1919, German units of the Baltic Landeswehr together with the German army staged a coup in Liepaja, disarming Latvian units and shortly afterwards arresting several ministers of the provisional government with the knowledge of the German governor general, Rüdiger von der Goltz (1865-1946). Ulmanis avoided arrest by seeking the protection of British Baltic Naval Squadron vessels. After the coup, Ulmanis’ government, supported by the Allies, was one of three governments that claimed authority. The others were the government of Andrievs Niedra (1871-1942), unofficially supported by Goltz, and the government of Soviet Latvia, led by Peter Stuchka (1865-1932). Ulmanis took the lead against units of the German army, the Landeswehr, the Russian Volunteer Western Army and the Red Army. On 22 May 1919, the Landeswehr and the Iron Division liberated Riga from the army of Soviet Latvia. On 3 July 1919, the Strazdumuiza Truce stopped the conflict between the Estonian army and the Allies on one side and the Landeswehr and the Iron Division on the other side. Ulmanis then formed his second government, which returned to Riga on 8 July 1919.

During the battles against the Western Army in October 1919, Ulmanis volunteered in the 1st Battalion of Students and was injured in the leg. His personal bravery helped to maintain the soldiers’ spirits. He was later awarded the Military Order of Lāčplēsis. The territory of Latvia was liberated from the Red Army in 1920.

In May 1920, during Ulmanis’ third government, the Constituent Assembly started work. Ulmanis was elected from the Latvian Farmers’ Union and led one of the parliamentary fractions. On 11 August 1920, during Ulmanis’ fourth government, Latvia signed a peace treaty with Soviet Russia. Ulmanis was elected in each of the successive Saeimas (parliaments). On 15 May 1934 Ulmanis used his position as prime minister to inaugurate a coup dismissing the current Saeima, forbidding political parties and establishing an authoritarian government. In April 1936, when the authority of the last elected state president, Alberts Kviesis (1881-1944), ended, Ulmanis took over the position.

But on 17 June 1940, the Red Army of Workers and Peasants occupied the Republic of Latvia. Ulmanis decided not to resist and agreed that his government should resign. On 21 July 1940 he resigned as state president and was deported the next day to Voroshilovska (now Stavropol, Russia), where he lived in a settlement until 4 July 1941. In August 1942, he was transferred to Baku (Azerbaijan), and in September 1942 to Krasonovodsk (Turkmenistan). He died in prison. The site of his grave is unknown.

Given the era of Soviet domination, this period of authoritarian rule has come to symbolize a golden age in Latvian social memory.