Tomb of the Unknown Soldier, Rome

At the end of the Great War, many countries determined that they would bury an anonymous corpse to symbolize all those who died on the battlefields. In Italy, the ceremony for the entombment of the Unknown Soldier took place in Rome on 4 November 1921 at the Vittoriano monument. This commemorative practice was meant to create a unifying national site of mourning, which later on, however, became a stage for Fascist political rituals.

At the end of the First World War, the ex-belligerent countries participated in a series of commemorative rituals. Though each nation chose its own language of commemoration, some features were universal. In particular, the ceremony in which a single, anonymous body was buried to symbolize the overwhelming trauma of the battlefields spanned numerous countries. Anonymity was the fate of millions of corpses, who had no known grave. The rituals surrounding the anonymous body legitimated the grief of individuals and families for their losses, thus uncovering the collectiveness of the post-war traumatic experience. Mourning had, indeed, both a private and a public dimension. The Tomb of the Unknown Soldier thus acted as a symbolic burial and emblem of modern mourning for entire nations. In Italy, however, nation-building and political meanings of sacrifice linked to this cult of the fallen were largely exploited by the following Fascist dictatorship.

In Italy, the idea of honouring a Milite ignoto (Unknown Soldier) was espoused for the first time by Colonel Giulio Douhet (1869-1930) in the pages of the periodical Il Dovere on 24 August 1920. He proposed to entomb the corpse of an Unknown Soldier in the Pantheon, where the two previous kings of united Italy, Victor Emmanuel II, King of Italy (1820-1878) and Umberto I, King of Italy (1844-1900), rested, to embody symbolically the totality of those who had died on the battlefields. A few months later, the newspaper Corriere della Sera endorsed a similar idea, which was well received among the public, with only few exceptions. It was, however, the organization of the French and British entombments on 11 November 1920 that revived the Italian proposal.

After much hesitancy and many postponements, the newly formed government led by Ivanoe Bonomi (1873-1951) took charge of the question through its Minister of War Luigi Gasparotto (1873-1954). The proposal for a Tomb of the Unknown Soldier advanced by the minister of war was then made into law in August 1921. On the same occasion, it was decided that the corpse would be transported solemnly by train from the battlefields on Italy’s north-eastern border to Rome. The corpse of this anonymous soldier would be entombed in the monument, commonly known as Vittoriano, dedicated to the memory of Victor Emmanuel II, the first king of united Italy. The ceremony would occur on 4 November 1921, the third anniversary of the Italian victory.

The approved ceremonial programme envisaged, indeed, the exhumation of eleven corpses from different battlefields and their gathering in Aquileia’s cathedral, where Maria Bergamas (1867-1952), mother of a dead volunteer from Trieste, randomly chose one on the 28 October. The role of Bergamas was unique when compared to other national cases, where it was usually veterans who were selected to pick a corpse among many at random. This was, therefore, the first national ceremony where women were allowed to play a key role, by highlighting the Christian reference to the mater dolorosa. Bergamas then followed the corpse to its final destination in Rome. The train transporting the deceased travelled through Udine, Venice, Bologna, Florence, and Arezzo to arrive eventually in Rome on 1 November. During its journey, it stopped 120 times in villages and cities, where local communities paid homage to this single soldier embodying the sacrifice of thousands.

In the capital city, the ceremony envisaged a Catholic Mass in the Santa Maria degli Angeli church on 2 November 1921, Day of the Dead, and a major ritual on 4 November at the Vittoriano monument. This last ceremony was attended by Victor Emmanuel III, King of Italy (1869-1947), all ranks of the armed forces, war widows, dead soldiers’ families and hundreds of common people. The objective of constructing a shared memory of the sacrifice of thousands of Italian men converged in a truly emotional participation of the entire national community. In a country dramatically polarized, the entombment of the Unknown Soldier aroused solid appreciation throughout the political spectrum. This anonymous body acted, indeed, as a place for reconciliation and identification. After this impressive event, the monument was no longer identified as a memorial to a single individual, King Victor Emmanuel II, but rather as a memorial to all those who died in the Great War. Hence, it truly became an effective “Altar of the Fatherland”, where the father of the nation and his humble but heroic sons could be jointly honoured. Collective and individual mourning were politically legitimated through a state-sponsored “cult of the fallen”.

It was around this last subject that the subsequent Fascist dictatorship also built its own political liturgy, by taking advantage of the legacy of the First World War to legitimize its seizure of power. The Vittoriano and the Tomb of the Unknown Soldier became, therefore, the preferred stage for a variety of patriotic ceremonies concerning the Great War and other national festivities, but also Fascist anniversaries. The presupposed ideological continuity between the experience of the conflict and the emergence of Fascism was even displayed by the regime in the 1932 Exhibition of the Fascist Revolution, which took place in Rome, where room N was expressly dedicated to the unknown soldier.

The “Altar of the Fatherland” served as the central site for national liturgy even after the fall of Fascism and the creation of the Italian Republic in 1946, and continues to do so up to today. 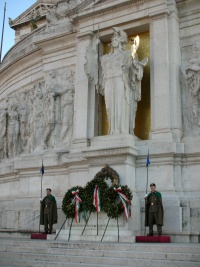 Tomb of the Unknown Soldier, Rome