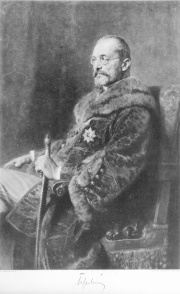 István Tisza was a Hungarian politician and minister. He served as Prime Minister from 1903 to 1905 and from 1913 to 1917. Austria-Hungary entered the First World War during Tisza's second period as prime minister.

A Hungarian Politician in the Late Habsburg Empire↑

István Tisza (1861-1918) was born on 22 April 1861 in Pest, Hungary. His father, Kálmán Tisza de Borosjenő (1830–1902), was a politician, minister, and Prime Minister of Hungary. The younger Tisza studied law and economics in Berlin, Heidelberg, and Budapest, and he received a doctorate in political science. After completing his schooling, he took care of the family estates in Bihar County and Geszt.

Tisza became the representative of the Liberal Party in 1886. In 1897 his uncle, Count Lajos Tisza’s (1832–1898) title was given to him by Francis Joseph I, Emperor of Austria (1830–1916). He became president of the Hungarian Industrial and Commercial Bank (Magyar Ipar és Kereskedelmi Bank) and was a board member for numerous joint-stock companies.

After the resignation of Prime Minister Károly Khuen-Héderváry (1849-1918), Tisza established a new government on 3 November 1903. During his first term as Prime Minister, Tisza modified the parliamentary rules of procedure that hindered the work of his majority in the Parliament. He increased the number of army recruits despite resistance from the opposition. Because of parliamentarian affairs and the polarization of the public, on 3 January 1905, the king dissolved the Parliament and called new elections. The elections resulted in the Liberal Party (Szabadelvű Párt), which had ruled for thirty years with absolute majority and as the most popular political party, being defeated by the Federal Opposition (Szövetkezett Ellenzék).[1] Tisza was ousted from the office of Prime Minister.

After the defeat at the polls, Tisza participated in the daily operations of the Upper House of Parliament between 1906 and 1910, but refrained from governmental politics. (His Liberal Party had also been dissolved). On 19 February 1910, Tisza founded the National Party of Work, which won the elections in June. His party opposed universal suffrage, but the number of voters still expanded significantly in 1913. Tisza was the leading figure in the governing party - one of the "strongmen" of Hungarian politics. Finally, on 22 May 1912, Tisza was elected speaker of the House, and he became Prime Minister for the second time on 7 June 1913.

During his second prime ministership, Tisza’s most urgent task was to strengthen the Hungarian state's finances, public administration, and military, in the midst of an insecure international field. The Russian Empire, Romania, and Serbia attended to territorial claims, and the Balkan wars had destabilized the region bordering Hungary. Preparation was necessary indeed; the First World War broke out on 28 July 1914. Later, the communists considered Tisza responsible for the First World War, even though he had opposed the declaration of war against Serbia for three weeks in July.

During the war Tisza tried his best to achieve victory for Austria-Hungary. Because Tisza opposed the politics of Charles I, Emperor of Austria (1887–1922), also Charles IV, King of Hungary, who experimented with moderate reforms and became king after the death of Francis Joseph on 30 December 1916, Tisza handed in his resignation at the monarch’s demand on 23 May 1917.

However, with the majority of Parliament supporting him, Tisza remained an influential figure in Hungary. On 15 June 1917, he went to the front line as the commander of the cavalry regiment of Debrecen. Before and during the First World War, István Tisza became a symbol of dualism and war politics for many people. Because of this, there were four attempts to assassinate him, the last one resulting in his death. On 31 October 1918, on the day of the otherwise bloodless "Chrysanthemum Revolution," Tisza was shot to death in his home, the Róheim Villa.