The Supreme War Council was an Allied administrative organisation, created by the Entente governments in November 1917 to coordinate their military action. Its most significant achievement was to establish control over Allied shipping to supply and transport food and raw materials from around the world.

The Supreme War Council (SWC) was created in Rapallo, Italy on 7 November 1917 by the political representatives of Britain, France and Italy. It was an Allied organisation that aimed to coordinate Allied action on the Western Front more effectively. The British Prime Minister David Lloyd George (1863-1945) initiated its creation, but the French Premier Paul Painlevé (1863-1933) supported his British counterpart fully. The Entente Allies had long been talking about closer cooperation in prosecuting the war, but the process had not advanced beyond more frequent political and military conferences. Lloyd George wanted greater unity, not only because a single directing mind was more efficient than a series of conferences, but more importantly, because an Allied supremo for the Western Front would be a Frenchman, and not the British commander-in-chief, Field Marshal Sir Douglas Haig (1861-1928). He mistrusted Haig, because of the enormous numbers of British casualties during the Somme (1916) and Ypres (1917) battles. By creating the SWC, Lloyd George took an important step towards the unity of command that would be forced on the Allies in March 1918 as a result of Germany’s spring offensives. Painlevé accepted that Lloyd George could not get the sanction of the government in London for supreme command for a French general, but knew that Lloyd George himself was in favour of such a solution to the problem of winning the war after more than three years of fighting.

With the aim of “the better co-ordination of military action on the Western front”, the three government representatives created an organisation comprising: the prime minister of each of the “Great Powers” fighting there, together with a second member of each government (the minister for foreign affairs, for example, or the war minister, depending on the topic under discussion) and a “Permanent Military Representative” (PMR). The Council was to meet monthly in Versailles, outside Paris, where the PMRs were to be based permanently. The SWC’s mission was to “watch over the general conduct of the war”, by preparing recommendations, ensuring the “concordance” of military plans and reporting on their execution. However, the general staff and military commander of each national army remained responsible to their respective governments. The role of each PMR was to receive from his government all documentation relating to the conduct of the war and to keep a daily watch on the “situation of the forces”. Crucially, the PMR was to have no other function than that of “technical adviser to the Council”.[1] This excluded the British Chief of the Imperial General Staff; instead, General Sir Henry Wilson (1864-1922) was appointed. General Luigi Cadorna (1850-1928), the sacked Italian army commander, became the Italian PMR. Although General Ferdinand Foch (1851-1929), chief of the general staff of the French army, was appointed for France, Lloyd George’s stipulation that the PMR could have no other function meant that he could not act in both positions. He was replaced by his chief of staff, General Maxime Weygand (1867-1965). The USA joined the organisation in November 1917, appointing General Tasker H. Bliss (1853-1930) as its PMR, but as an associated (not an allied) power, sent no official government representatives.

The SWC met three more times before the German spring offensives began on 21 March 1918: in Versailles in December and January, and in London in March. They established an Executive War Board in order to create an Allied general reserve, but the board failed to persuade the national commanders-in-chief to release any of their own reserves of men into a general reserve before the German offensives rendered such discussions nugatory. Thereafter the Council met monthly as agreed. Its final session, the eighth, discussed the terms of the armistice to be submitted to Germany.

The PMRs held fifty-one meetings in Versailles to study topics requested by the SWC, by their own governments, or on their own initiative, and they produced forty unanimous “Joint Notes”. These dealt with future plans or with matters such as aviation, a general reserve, and the extension of the British front in France.

Gradually the SWC set up sub-committees to deal with specific problems such as transportation (road and rail in France and Belgium), or tanks. The Allied War Purchases and Finance Council, set up in August 1917 to oversee Allied purchases in the US, came under the SWC umbrella. A Food Council and a Munitions Council were also established, each running subsidiary committees dealing with individual items. Thus the supply of a huge range of commodities, such as wheat or steel, came under Allied control. By far the most important of the SWC’s organisation was the Allied Maritime Transport Council, which was created in November 1917, immediately following the SWC’s creation. Germany’s adoption of unrestricted submarine warfare had wreaked so much damage on Allied shipping that the most significant (and limiting) element of the food and raw material programmes was the allocation of tonnage for importation by sea.

At its founding, the SWC merely regularised Allied political and military conferences, yet its existence made the imposition of supreme military command more acceptable, when the military crisis of March 1918 forced that decision on the Allies; its bureaucracy enabled joint responses to problems of transport and supply for armies and civilians alike. Yet the Allied Maritime Transport Council was abolished in April 1919, along with most of the other SWC’s organisations that same year, because of the desire to be rid of economic restrictions and state control. 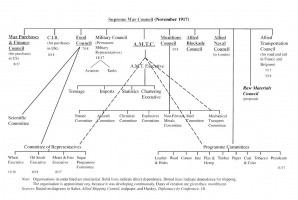 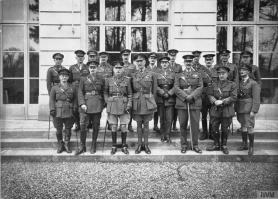