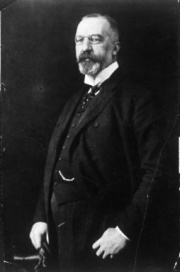 Karl Graf von Stürgkh was an Austrian member of the Imperial Council, Minister for Education, and Minister President of Cisleithania from 3 November 1911 until his assassination on 21 October 1916 by the Social Democrat Friedrich Adler. Stürgkh was one of a committee of five Austro-Hungarian ministers who made the decision to go to war in summer 1914.

Count Karl Stürgkh (1859-1916) was born to an ancient noble Styrian family on 30 October 1859 in Graz. In 1877 he enrolled at Graz University and in 1881 earned a doctorate in law. In the same year he entered the civil service of the Styrian Statthalterei, the imperial administration of that province. He left state service in 1891, when he was elected to the Reichsrat (the Austrian parliament known as the Imperial Council) of Cisleithania (the Austrian part of the Habsburg Monarchy). Stürgkh was a representative of the ultraconservative and Roman-Catholic Verfassungstreuer Großgrundbesitz (the loyal land-holding party), the favorite party of the high nobility. Stürgkh became prominent as a stubborn opponent of universal male suffrage, which was introduced in 1907; he was not re-elected to the Reichsrat in that year’s elections.

Minister and Minister President prior to 1914↑

From 10 February 1909 until 3 November 1911 Stürgkh served as Austrian Minister of Education in the cabinets of Baron Richard von Bienerth-Schmerling (1863–1918) and Paul Gautsch von Frankenthurn (1851–1918). Stürgkh proved himself a zealous advocate of the traditional humanistic education in the country’s gymnasia. After Gautsch resigned in the wake of violent unrest in Vienna caused by high food prices, Francis Joseph I, Emperor of Austria (1830–1916) appointed Stürgkh Austrian Minister President on 3 November 1911. Stürgkh’s cabinet consisted of civil servants and experts, who were viewed as “apolitical” bureaucrats. In order to secure majorities for his legislature in the Reichsrat, Stürgkh pursued a “policy of bridgeheads” by bargaining with varying political and national sections represented in the parliament. This method brought Stürgkh initial success when he secured passage of a new military program in 1912–1913, a law that increased the construction of homes, and a reform of the public service law. In spring 1914 Stürgkh achieved a “compromise” between competing national groups in Galicia, but his attempts at a similar solution for Bohemia failed in 1913, a setback that caused him – overruling Czech protestations – to dissolve the Bohemian Diet. Despite some noteworthy successes, Stürgkh’s relations with the parliament progressively deteriorated. When his bargaining power failed, he turned to a more autocratic form of rule and prompted the emperor to adjourn the Reichsrat; during such periods, the constitution permitted Stürgkh to rule by emergency decrees. The continuous filibustering in the parliament allowed Stürgkh to indefinitely adjourn the sessions of the Reichsrat’s two chambers on 16 March 1914 – starting a period of de-facto-elimination of the parliament that would last for more than three years.

Stürgkh’s Rule on the Home Front during the War↑

Having exhausted his assets in early 1914, Stürgkh’s policy had come to the same dead end that his predecessors had encountered. Given this hopeless situation, it is no wonder that Stürgkh, together with Foreign Minister Count Leopold Berchtold (1863–1942) and the army’s Chief of Staff Baron Franz Conrad von Hötzendorf (1852–1925), was among those members of the ruling elite who advocated a preventive strike against Serbia after the assassination of Franz Ferdinand, Archduke of Austria-Este (1863–1914) in Sarajevo on 28 June 1914. Stürgkh’s determination to subdue Serbia, the continuous trouble-maker in the southern part of the monarchy and, in his perception, the main culprit of the Archduke’s murder, stemmed mainly from his attempt to defeat Panslavism in the majority Slavic parts of Austria-Hungary. During the July Crisis, at the deliberations of the Crown Council, the Joined Ministers’ Committee comprised of only five men, Stürgkh did not worry about the threatening extension of his intended limited war against Serbia into a European or global conflict. After the declaration of war on Serbia on 28 July 1914, Stürgkh kept refusing to convene the adjourned Reichsrat and instead implemented a harsh censorship in Cisleithania, intimidating anyone who dared to criticize his political course. Although Stürgkh attempted to confine the extended competencies of the army in the Hinterland and vis-à-vis the civil administration, Austrian society held Stürgkh responsible for the suffering caused by the war. In particular, the Minister President was blamed for the shortage of food supplies for civilians in Cisleithania compared to the higher rations available in Hungary. Stürgkh was viewed as incapable of stopping military interference in domestic affairs and of successfully pressing the Hungarians to deliver more food supplies. He had become the hated representative of an authoritarian and incompetent regime on the home front. Friedrich Adler (1879–1960), the son of the Social Democratic Party Chairman Victor Adler (1852–1918), shot Stürgkh while having lunch in a Vienna hotel on 21 October 1916. Adler was sentenced to death, but was amnestied after the war.