The steel helmet was invented and fielded in response to increased lethality on the battlefield due to advances in artillery and fragmentation. World War I witnessed the first wide-spread use of the steel helmet, which remains a signature piece of equipment in modern warfare.

Soldier combat headgear prior to World War I was largely ornamental in nature, serving to identify the wearer’s nation, branch of service, rank, or unit. Helmet designs varied widely, ranging from the German Pickelhaube (spiked helmet) to the British pith helmet. The Pickelhaube, made of boiled (and thus, hardened) leather, like the pith helmet, made of pith fibers or cork, provided very little ballistic protection for the wearer. Even at the onset of World War I, belligerent nations still equipped their soldiers with soft headgear, such as the cloth French kepi or the felt American campaign hat.

The dramatic increase in head wounds due to the proliferation of artillery and improved shrapnel munitions created a need for better head protection. The French were the first to address this challenge with a small steel cap, the calotte métallique (metal cap), worn under the soldiers’ cloth kepi. By 1915, the French sought a more effective solution to falling shrapnel and fielded the M15 Adrian Helmet, or casque Adrian, named after is creator, Intendant General August-Louis Adrian (1859-1933). This first of the modern steel helmets was constructed of mild steel, 0.7 mm thick, and consisted of a two-piece brim, a crown, and a comb either riveted or welded together. It was lined with a leather-covered metal band which suspended the helmet on the wearer’s head. Weighing just under two pounds (0.765 kg), the Adrian helmet was designed to protect against low-velocity falling shrapnel and was generally ineffective against rifle or machine gun fire. Over 3 million M15 Adrian helmets were eventually produced and were used by a number of countries including Russia, Belgium, Romania, and the United States. The helmet was modified and upgraded in 1926 and continued to be used through World War II.

German troops entered World War I wearing the Pickelhaube and they too quickly learned of the need for better ballistic head protection. Individual efforts began in 1915 to field better protective headgear, such as the Gaede helmet issued to Army Group Gaede on the southern flank of Germany’s western front. Constructed of cloth and leather, its brow and mantle were covered with a steel plate providing frontal protection to its wearer. After significant testing, the Imperial German Army fielded the Stahlhelm, or steel helmet, at first in limited numbers to stormtroopers at the Battle of Verdun in February 1916. It proved successful and was in general issue on the Western Front by the end of the year and on the Eastern Front by mid-1917. Constructed of chromium-nickel-steel alloy, the Stahlhelm was issued in various sizes and ranged in weight from just under 2.5 pounds to just over 3.5 pounds (.98 kg to 1.4 kg), depending on size. In addition to its distinctive profile, another recognizable feature of the M16 Stahlhelm were two lugs on the side of the dome. These projections provided ventilation and also served as attachment points for an additional armor plate or Stirnpanzer. Like the French Adrian helmet, the Stahlhelm incorporated a suspension system of a metal band covered with leather padding and adjusted to fit with leather or fabric ties. Over 8.5 million M16 Stahlhelme were produced during World War I. The helmet was used by other Central Powers nations including Austria-Hungary and the Ottoman Empire and was also updated and modified to serve Germany into World War II.

The British also sought improved headgear in World War I to reduce shrapnel injuries to the head from air burst artillery. The British War Office began studies in the summer of 1915 and quickly adopted a design by John L. Brodie initially constructed of mild steel. This helmet, designated “Brodie’s Steel Helmet, War Office Pattern” began fielding in October 1915 and gave the name of its inventor to an entire line of stamped steel helmets used by a large number of countries including Australia, Canada, New Zealand, and the United States (which adopted it as the M1917). By 1916, Brodie helmet construction shifted to stronger, non-magnetic manganese steel. Additional improvements to the original Brodie design were approved in April 1916 and led to the fielding of the Mark I steel helmet which began to be issued in September 1916. Unlike the full dome of the Adrian or the Stahlhelm, the British designed helmet was shallower and resembled a pie tin. Its adjustable suspension system, or liner, was of conventional design, being made of leather and treated cloth. Over 7.5 million Brodie helmets were produced and continued to serve, with minor modification and improvements, into World War II.

Helmet finishes and later, camouflage, varied widely between combatants and over time. Early French M15 helmets were painted “horizon blue” or light blue-gray which changed to a matte grey-blue by war’s end and to tan or khaki by World War II. Basic Stahlhelme were issued in field grey (feldgrau) until a July 1918 general staff order directed camouflage paint schemes be applied in green/brown/black/yellow/rust camouflage patterns. Early British Brodie helmets were considered too light reflective and so, by 1918, were painted in a matte khaki finish and textured with sand or crushed cork. Camouflage was not uncommon. 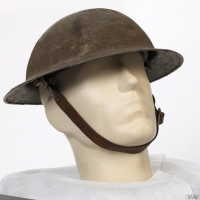 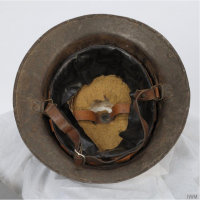 Inside of a British Brodie helmet 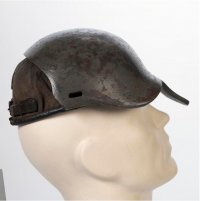 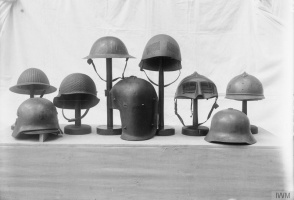 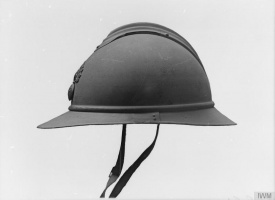 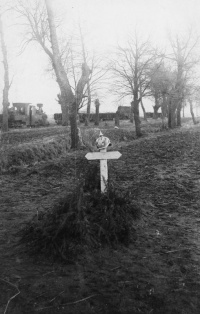 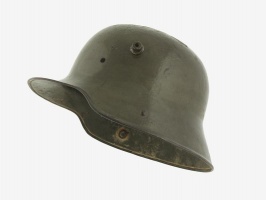