The painter Adriano de Sousa Lopes was the only official Portuguese war artist in the Great War, stationed on the Western Front. Like most of his international colleagues, he produced remarkable field drawings and etchings. This article explores his particular incorporation in the Portuguese army and his most relevant works up to the 1930s.

A battle painter in trench warfare↑

The painter Adriano de Sousa Lopes (1879-1944), official war artist of the Portuguese army in France, trained as a history painter in Lisbon and Paris from 1903, at the École Nationale et Spéciale des Beaux-Arts, in Fernand Cormon’s (1854-1924) studio. Sousa Lopes was, in pre-war years, a regular exhibitor at the salon of the Société des Artistes Français. His major works were grounded in literature at this time but impressionism also impacted his technique, which he developed as a regular landscape and portrait painter.

When Portugal secured control over a sector in northern France, in the spring of 1917, the painter enlisted in the Corpo Expedicionário Português (Portuguese Expeditionary Corps, or CEP) as its only official artist, inspired by the example of French artists such as Georges Scott (1873-1942) and Lucien Jonas (1880-1947). His position within the army was a unique solution, particularly when compared to other nations’ art schemes: he was appointed captain of an Artistic Service created for him, under the command of the CEP’s General Staff. As long as the state of war lasted, he was head of a department of which he was the only member.

In addition to hundreds of field drawings executed in a sector in the area of Neuve-Chapelle, Sousa Lopes produced, between 1918 and 1921, a remarkable series of fifteen etchings, based on his sketches and printed in generous dimensions. Not published as an album, as he desired, these works remain dispersed in various collections. Among the lively scenes traced with quick skill we can observe scenes of soldiers on foot at the trenches, waiting for an invisible enemy; a patrol crawling through no man’s land, suddenly detected by the very-lights; and symbolic evocations of war, like the grave of an unknown soldier left alone in Flanders fields.

Paintings for the Military Museum of Lisbon↑

The literature on the artist’s war period is sparse, as, is the case for the whole of his career. However, a decisive remark about the paintings he produced for the Military Museum of Lisbon should be highlighted: that they are the best – or even the only – battle images in Portuguese art.[1] The artist’s personal view of the war – centred on the common soldier’s experience of trench warfare – was shown in this series of monumental paintings, a unique project in international terms. The oil paintings were exhibited in Lisbon in January 1924 and received general acclaim. The painting A rendição (The Replacement) can be regarded as the masterpiece of this series. On a twelve-and-a-half metre wide canvas, with about fifteen life-size figures, he pictured an exhausted infantry platoon, arranged as in a classical frieze, coming out of a frontline trench and marching – in visibly irregular form – to the rear-guard posts. Observing this procession in a desolate landscape filled with snow, the onlooker witnesses the degraded humanity forged by trench warfare.

Two other paintings in this series depict episodes of resistance during the Battle of the Lys, on 9 April 1918. Launched as part of the German Spring Offensive, the incident was a serious blow to the active Portuguese presence on the Western Front. Another picture, A volta do herói (The Return of the Hero) depicts the almost religious deposition of a dead soldier in a trench, sheltered by his comrades. This painting was based on a sonnet by the poet-soldier Augusto Casimiro (1889-1967). In 1932, the artist augmented his work with a masterly composition of apocalyptic scenery, Remuniciamento da artilharia (Artillery Reloading), which portrays a munitions cart pulled by fast-galloping mules, pictured in close up view, crossing the vast wasteland of the front, harassed by explosions and dust.

In the end, a total of seven large-scale oil paintings were installed in the Great War rooms, specially built at the Military Museum of Lisbon to house these works and opened in 1936. These works, fruit of Sousa Lopes’ direct experience of trench warfare, were intended to restate the relevance of the European tradition of battle painting. They were rooted in the ambitious scale and epic grandeur of the French romantic masters. Sousa Lopes’ humanist vision argues for the dignity of the common soldier’s doomed struggle – mostly pictured larger than life-size – and the self-sacrifice of these humble men, as he indicated to a newspaper in the war’s aftermath:

[Those] who experienced serious risks and deserve the admiration of all the Portuguese are our military officers and soldiers, even those who don’t have a war cross on their chest, yet suffered all storms of this war; they made great sacrifices, wrenched from the work in their rural fields and thrown to Flanders’ plains, where shrapnel rained continuously.[2]

Finally, it is worth adding that the artist also produced four oil paintings of medium size – depicting impressive scenes spotted in the trenches –, which decorated the Allied section, opened in 1923, in the Hôtel des Invalides, in Paris. Today, they are in the Musée de l’Armée’s collection. 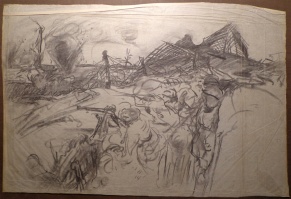