By Tigran Martirosyan
PDF EPUB KINDLE Print
Şakir, Bahaeddin
Turkish nationalist politician, senior member of the governing body of the Committee of Union and Progress, and head of the Special Organization in the eastern provinces of the Ottoman Empire.
Born 01 January 1874 in Sliven (İslimiye), formerly the Ottoman Empire, now Bulgaria
Died 17 April 1922 in Berlin, Germany

Bahaeddin Şakir was the reorganizer of the Committee of Union and Progress, a political party that became the government of the Ottoman Empire during the war. As a major functionary of the Special Organization, a paramilitary network which took orders directly from the Committee, Şakir emerged as one of the architects of the Armenian Genocide.

Bahaeddin Şakir (1874-1922) was the son of muhacirs[1] from Bulgaria.[2]After graduating in 1896 from the Imperial School of Medicine, Şakir served as the personal physician of Yusuf Izzeddin (1857-1916), the second Ottoman prince in the line of succession to the throne. When his clandestine connections to the Young Turks[3] were exposed, he was exiled to Erzincan from where, in 1905, he fled to Paris. With his arrival, the Young Turk movement abroad gained momentum. At Sorbonne University, Şakir sought help from Turkish chemistry students in making bombs. However, he saw his core mission as uniting the Young Turks under a single banner and forming a revolutionary committee.[4]

From 1905 to 1908, Şakir devoted his energies to transforming the Committee of Progress and Union, to be renamed the Committee of Union and Progress (CUP) during the 1908 Young Turk Revolution,[5] into an opposition party capable of direct action. In 1908, following the proclamation of constitutional monarchy, Şakir returned to Constantinople and began working as a forensic medicine specialist at the Imperial University’s Faculty of Medicine. During and beyond this period, he was able to exert influence on Mehmed Talaat Pasha (1874-1921), minister of the interior and, from 1913 to 1918, de facto head of state. Şakir remained in the center of decision-making and close to Talaat throughout the war.

During the Balkan Wars, he moved to Adrianople and assumed the position of head physician at the Red Crescent hospital. Şakir used this assignment as a cover for rendering services as an off-duty political commissar for the CUP. He was arrested by the Bulgarian forces but was released after the Treaty of London was signed in 1913.

In 1920, Şakir traveled to Baku to attend the Congress of the Peoples of the East, a multinational conference held by the Communist International. There, he turned his coat and, aiming at reaching a larger audience of Bolsheviks, Turkey’s newfound suppliers of arms and gold, addressed the participants as “comrades” and announced that Turkish officers were “genuine proletarians.”[6]

After returning to Constantinople in 1912, Şakir became one of the most influential executives of the central committee of the CUP (whose members were known as “unionists”), retaining his authority until 1918. In addition to being a party functionary with extensive powers over civilian and military personnel, he wore two hats at the Special Organization[7] as chief of the political department and head of the organization in the eastern provinces, which had a considerable population of ethnic Armenians.

In this capacity, he travelled to Erzurum in August 1914, where he tried to convince the party bosses of the Armenian Revolutionary Federation (collectively known as Dashnaks) to lead an anti-Russian guerrilla war in the Caucasus aimed at preparing the Ottoman conquest. However, the Dashnaks stated that all Armenians had to remain loyal to the country in which they lived. This reasonable response reportedly angered Şakir who, from the moment mobilization was ordered, began to stoke anti-Armenian sentiment along the Caucasus Front. With a nasty tinge of Islamic-Turkish chauvinism, he preached sermons to Muslim villagers and gave orders to disarm Armenian soldiers serving in the Ottoman army.

Complicity in Destruction of Armenians↑

Even before the Young Turk Revolution, Şakir spoke of the Armenians as “infidels who are enemies of Islam.”[8] After the outbreak of the war, Şakir played a pivotal role in the decision to deport the Armenians.[9] He travelled from one eastern town to another, encouraging local unionist leaders, administrators, and commanders to form task forces for the preparation of deportations. In this respect, Şakir provided the link between the government in Constantinople and the valis, or governors, who administered the provinces.

On Şakir’s prompting, the deportation from Erzurum began in mid-May 1915, preceding the government’s deportation timetable. Together with Hasan Tahsin (1888-1919), the vali of Erzurum, Şakir coordinated efforts with Bitlis, which was to join the deportation scheme. With Şakir’s arrival in Trebizond, anti-Armenian incidents increased, and, following his meeting with vali Cemal Azmi (1868-1922), the order for deportation was issued. Şakir was a major culprit in the deportation and destruction of the Armenians of Harput. In the telegram he sent to the CUP Secretary Mehmed Nazım (1870-1926) via vali Sabit Sağıroğlu (1882-1960), Şakir wrote:

Have Armenians who were deported from there been eliminated? Have those harmful elements who were distanced [from there] through deportation been liquidated or simply deported? Please be frank and open in your report [on the matter], my brother.[10]

After the war’s end, key members of the CUP’s central committee slipped out of Constantinople on a German torpedo boat. Şakir, who was among them, later headed for Berlin. At the Ottoman courts martial conducted in 1919, Şakir was sentenced to death in absentia for his role in the destruction of Armenians of Harput. He was also tried in the main case, in which high-ranking unionists were charged with crimes against humanity. These trials were never concluded, however, because unionist mass murderers either evaded arrest altogether or were granted their freedom in exchange for the release of British prisoners kidnapped by Mustafa Kemal’s (1881-1938) nationalist forces.

By the autumn of 1919, it had become apparent that the post-war punishments of the top CUP executives would never be fully enforced. Certain prominent Dashnaks demanded that action be taken to “square accounts,” and it was decided at a party congress that assassination was the best answer. Specially assembled bands of avengers named their operation “Nemesis” after the Greek goddess of retribution. Şakir was identified as one of their primary targets.

On 17 April 1922, two Armenian hitmen encountered Bahaeddin Şakir and Cemal Azmi[11] strolling with their families along Uhlandstraße. The hitmen ran full tilt toward the Turkish entourage. One of them killed Azmi, and then fired at Şakir, wounding him. His collaborator delivered the coup de grâce. Both Armenian men managed to escape from the scene. 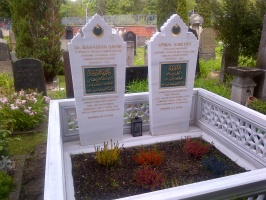