Seeckt became one of Germany’s best staff officers during the Great War. After 1918, he was the central figure of the Weimar Republic’s Reichswehr and a major contributor to the mobile doctrines that shaped the army's performance in World War II.

Hans von Seeckt (1866-1936) is most well known for his military and political careers in the Weimar Republic. However, the record, the reputation, and the ideas that enabled these achievements were based on his career during the Great War. Seeckt was in many ways an atypical figure in the General Staff establishment. The son of a Pomeranian general, destined for a military career from birth, he attended a civilian Gymnasium instead of a cadet school, received his Abitur in 1885, and was accepted for General Staff training in 1893. Widely traveled in Europe and the Middle East and fluent in several languages, he was marked as a rising star. By 1914 he was Chief of Staff of III Corps which, stationed in Berlin, was the showpiece of Prussia’s line army and a not always friendly rival of the Guards.

Seeckt made his mark in the war’s first months, planning a number of successful corps-level counterattacks based on the coordination of manpower and firepower. At a time when tension levels were high in the German High Command, Seeckt also attracted notice as a cool head, unflappable in crises. In March 1915, he was appointed as the chief of staff of a newly created 11th Army whose specific mission was preparing and executing a successful breakthrough in the West.

Shortly thereafter, Seeckt and his headquarters were suddenly sent to Russia, where they would win one of the Central Powers’ greatest victories. Along a twenty-five-mile front at Gorlice-Tarnow the Germans broke into the Russian rear and initiated a panic that within weeks left Tsarist Russia showing signs of disintegration, as opposed to what were previously assumed to be mere symptoms of stress.

Seeckt’s victory was facilitated and enabled by his commander. August von Mackensen (1849-1945) looked like a caricature from a previous century, but he had a high learning curve, knew how to listen to his subordinates, and recognized Seeckt’s abilities as a planner and organizer.

Five months after Gorlice-Tarnow, Seeckt and Mackensen conducted a combined Central Powers campaign against Serbia. In an overlooked proto-blitzkrieg through extraordinarily unpromising terrain, a command and staff system at peak effectiveness employed state-of-the-art material - aircraft, heavy artillery, and bridging technology - to drive a semi-modern Serbian army into the Adriatic Sea, while simultaneously driving the hastily deployed Anglo-French reinforcements into the “internment camp” of Salonika.

Chief of Staff of the Ottoman Army↑

Seeckt spent the rest of the war in its eastern theater, as much for his increasingly sophisticated ability to deal with Germany’s allies as for his abilities as a strategist. He served as chief of staff in joint German-Austrian commands. In late 1917, he was appointed chief of staff of the Ottoman army: a path to futility if ever one existed. Yet as a result, Hans von Seeckt emerged untainted by defeat - and his record made him a logical military choice to build the army of the Weimar Republic.

Seeckt became head of the army command in March 1920. He faced the challenges of reconstructing the military and securing its place in a new and widely unpopular form of government. To that end, Seeckt sought close and systematic connections with the universities, the government and the industrialists, for the common goal of German security. Maintaining those connections depended on strict political neutrality. The armed forces must be seen as being in society but not of it: a thing apart, defined by competence and effectiveness, able to fight outnumbered and win. The Reichswehr structured along those lines served the Republic better than is usually understood, even after Seeckt’s 1926 resignation - forced, ironically, for political reasons. 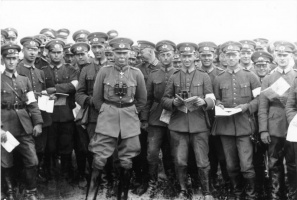