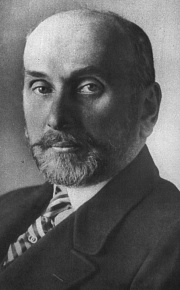 Sergei Sazonov became Russian Foreign Minister in autumn 1910. In July 1914 he argued for a firm stance against Austrian aggression and general mobilisation of the army, but historians dispute his responsibility for the outbreak of war. His wartime diplomacy was often ineffectual, but it was domestic politics that prompted his dismissal in 1916.

Sergei Sazonov (1860-1927) was educated at St. Petersburg’s prestigious Imperial Alexander Lycée, which placed an emphasis on foreign languages and literature. It fostered tolerance and respect for learning alongside loyalty to the dynasty and devotion to state service, but teaching could be superficial. He rose rapidly from minor diplomatic posts in London, Washington and the Vatican to become Deputy Foreign Minister in the government of his brother-in-law, Prime Minister Petr Arkad’evich Stolypin (1862-1911), in 1909. Sazonov’s elevation to Foreign Minister a year later was hastened by the behaviour of his predecessor, Aleksandr Petrovich Izvol’skii (1856-1919), during the Balkan crisis of 1908-1909. Without the consent of the Council of Ministers, Izvol’skii bargained with his Austrian counterpart for revisions to the Treaty of Berlin that would see the Straits of the Bosporus and Dardanelles opened to Russian ships while Austria annexed Bosnia and Herzegovina. Austria, backed by the threat of German force, announced annexation without any treaty review, and Russia had to accept Austrian aggression toward the Slav provinces for no return. In the aftermath of this humiliating acquiescence Izvol’skii was removed to the diplomatic mission in Paris and the inexperienced Sazonov took his place.

Sazonov’s policy options as Foreign Minister were limited, especially given Stolypin’s reiteration of the necessity of a period of peace for the recuperation of Russia’s military and financial resources and for the establishment of internal stability, all of which had been badly damaged by the Russian-Japanese war of 1904-1905. In relation to Germany, Sazonov could pursue a policy of accommodation and deflection of German attention towards Britain and a battle for maritime supremacy. Alternatively, he could adopt one of deterrence, dissuading Germany from aggression in Eastern Europe through shows of power and unity with Russia’s partners in the Triple Alliance, England and France. During his first foreign visit to Potsdam he made considerable concessions to Germany, but amicable Russo-German relations began to unravel from late 1912. The appointment of a German officer, Otto Liman von Sanders (1855-1929), to command Turkey’s Constantinople garrison in October 1913 threatened Russia’s ambition to control the Straits should the Ottoman Empire collapse. Meanwhile, Sazonov’s policy of restraint did not always extend to Germany’s ally, Austria. A number of factors militated against Austro-Russian cooperation, including mutual suspicion exacerbated by the 1908-1909 crisis; the threat posed by shows of weakness in foreign policy to internal security in both countries; competition for potential military support from Balkan client states; and the adventurism of the Balkan nations. Russia urged Serbia and Bulgaria to conclude an alliance in February 1912 to curb southward Austrian advances. When Greece and Montenegro joined the Serbs and Bulgarians to seize Ottoman territory in the First Balkan War of 1912-1913, threatening Austrian access to the Adriatic and designs for an independent Albania in the process, St. Petersburg was unable to restrain them. In June 1914, following victory by Serbia and Romania over Bulgaria in the Second Balkan War, Sazonov visited Romania, raising the spectre of Russian backing for a Serbian-Romanian alliance directed against Austro-Hungarian territory.

On 11 July (24 July) 1914, Sazonov read Austria’s ultimatum to Serbia in response to the assassination of Franz Ferdinand, Archduke of Austria-Este (1863-1914) and exclaimed that European war was unavoidable. Secret police reports suggested that Germany, fearing a resurgence of Russian military might, was preparing to attack on any pretext, and Sazonov detected Germany’s hand in Austria’s demands to Russia’s fellow Slavs. The French ambassador pressed him to take a tough line with Austria, although Britain was in favour of gaining time for a peaceful solution. That afternoon, Sazonov declared before Russia’s Council of Ministers that concessions made to Germany and Austria in the past five years had only been taken as signs of Russia’s current weakness and cause for greater aggression; further yielding to the Central Powers in the Balkans was therefore no guarantee of peace. Sazonov argued that a firm stand risked dangerous consequences but was the only way to prevent Russia from becoming a second rate power. The Council resolved to request the Austrian government to extend the time limit on its demands, to advise Belgrade to show conciliation but not to jeopardise Serbian independence, and to ask the Tsar to begin preparations for war. By 17 July (30 July) 1914, Vienna had rejected Belgrade’s mollifying response and initiated bombardment, Berlin was warning that continued Russian military preparations would prompt German mobilisation, and Sazonov, supported by Russia’s Chief of General Staff, persuaded Nicholas II, Emperor of Russia (1868-1918) to order general, rather than partial, mobilisation of the army. Two days later the German ambassador informed Sazonov that their countries were at war.

Sazonov conducted a flurry of wartime diplomacy on Russia’s western frontiers. In September 1914 he proposed a set of war aims for Russia, England and France. He formulated plans for a unified Polish kingdom within the Russian Empire that would have some powers of local self-government and pursued negotiations with Italy, Bulgaria and Romania to draw them into war on the side of the Entente. These efforts were not successful. Many of his war aims were vague and contradictory and never officially endorsed. His proposal for Poland was watered down, delayed, and then rejected by more conservative elements within the Russian government, undermining pro-Allied feeling within the Polish public. Bulgaria eventually joined Austria and Germany and crushed Serbia from the rear. Belated Romanian intervention on the side of the Allies contributed little and extended the front on which Russia had to fight by 600 kilometres, while Italy’s ineffectual participation came at a price of territorial awards that appalled the Russians and Serbs and stirred up lasting conflict. Sazonov cannot be held solely responsible for these failures. He was hampered by divided agendas among the Allies and within Russia, rash actions by subordinates in the diplomatic service, and the intractability of politics in Eastern Europe and the Near East. His dismissal from government in June 1916 owed more to internal than to international politics. His willingness to countenance a ministry responsible to parliament and his objection to the Tsar’s assumption of Supreme Command of the army aroused the antipathy of the Alexandra Feodorovna, Empress, consort of Nicholas II (1872-1918) and left him open to the vagaries of the Tsar’s attempt to combine limited concessions to liberal opinion with insistence on autocratic prerogatives. In the wake of Russia’s revolutions of 1917, Sazonov represented the anti-Bolshevik White movement in foreign affairs, but White defeat saw him spend his last years writing his memoirs in Paris.

In his memoirs, Sazonov presented Russian foreign policy under his aegis as defensive and peaceful. This account was accepted by western historians who acknowledged the excitability of Russia’s Foreign Minister but sought to explain the origins of the First World War as an accidental slide into conflict by countries not desiring war. Soviet historians, in the scant attention paid to the war, stressed the role of German imperialism in its outbreak. Emphasis on a German bid for world power gained favour in the west from the early 1960s after the publication of works by Fritz Fischer (1908-1999). Sean McMeekin, however, argues that Sazonov’s display of pacifism was duplicitous and that he took Russia in a direction which would tip all Europe into war. Sazonov feared hostilities with Germany but aggressively plotted to take advantage of Ottoman and Austro-Hungarian fragility. In 1912, as the Balkan coalition advanced into Ottoman territory, Sazonov considered mobilising forces to seize Constantinople despite the risk of triggering broader European conflict. In July 1914, with one eye on the Straits and another on Austrian Galicia, he manipulated the Tsar into declaring preparations for war. This move provoked Germany and set Russia on an inexorable path to conflict. This argument, however, overstates Sazonov’s freedom of action and the unanimity of opinion in St. Petersburg, oversimplifies Russian war aims and the consequences of Russian preparations for war, and minimises the role of Austrian and German bellicosity. Nevertheless, McMeekin’s work contributes to a growing body of scholarship, such as that by Richard F. Hamilton and Holger H. Herwig, which looks beyond German guilt to actors and decision making processes in all powers to better understand the road to war.