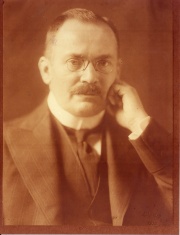 The renowned archaeologist Friedrich Sarre used his local knowledge to support the German-Ottoman war effort in western Persia in various leading functions. After the war, he sheltered the fugitive war criminal Enver Pasha in his house.

Friedrich Sarre’s (1865-1945) father was from a Huguenot family, his mother from the industrialist family Heckmann. Sarre studied art history in Leipzig. He travelled for archaeological research thanks to his aunt Elise Wentzel-Heckmann (1833-1914) to Anatolia, Persia and Central Asia, specializing in Islamic art. Together with Ernst Herzfeld (1879-1948) he excavated in Samara in 1907-08. Sarre headed the Islamic Arts Department of the Royal Museums in Berlin, investing much personal wealth. Having married Maria Humann (1875-1970), daughter of the “discoverer” of the Pergamon Altar, Carl Humann (1839-1896), Sarre had a neo-Orientalist villa built in Neubabelsberg. The couple had four children.

Wartime Activity in Persia and the Ottoman Empire↑

During World War I, after an initial spell on the Russian front, reserve officer Sarre was to support the German-Ottoman war effort with his knowledge of the Middle East. Upon his arrival in Baghdad in April 1915, he negotiated between German and Ottoman jihad propagandists as Ismail Enver Pasha’s (1881-1922) “personal friend.” He then served as commander in the lines of communication and consul to the pro-German Persian counter-government in Kirmānšāh (now Bākhtarān). In early 1916 the Central Powers retreated from Kirmānšāh. Sarre then served in Marshal Colmar von der Goltz’s (1843-1916) staff in Baghdad. After the marshal’s death in April 1916, Sarre was in Constantinople, then at home. From September 1916 until the second retreat in March 1917, Sarre returned as military attaché to the second German mission in Kirmānšāh. He spent several months re-conceptualizing the Istanbul War Museum before a brief time as staff officer in Aleppo. Sarre also visited archeological sites in Persia and the Ottoman Empire during the war and made acquisitions on the Baghdad and Constantinople antiquity markets for himself and the museums.

Friedrich Sarre’s wife Maria had maintained a close friendship with Enver ever since his time as Ottoman military attaché in Berlin (1909-1911). When Enver had to flee Istanbul following the Ottoman armistice, he found shelter in Sarre’s villa.