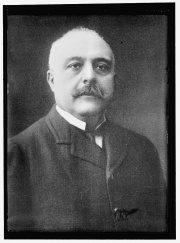 Antonio Salandra was an important Italian politician in the early 20th century. When the Great War broke out, he was prime minister of Italy and had a decisive yet controversial role in the Italian intervention.

Born in Troia (Foggia) to a wealthy Apulian family, Antonio Salandra (1853-1931) was educated in law at the University of Naples, and became professor of administrative law at the University of Rome, before entering politics. An authoritarian conservative, he was elected deputy for the first time in 1866, and his career saw steady progress. He was appointed minister of agriculture in 1899 and minister of finance several times between 1895 and 1910.

When Giovanni Giolitti’s (1842-1928) government fell in the spring of 1914, Salandra was suggested as his successor to Victor Emmanuel III, King of Italy (1869-1947), by Giolitti himself. Like many others, Giolitti saw Salandra as merely a stop-gap premier. Instead, Salandra proved to be a skilled and ambitious politician: in an attempt to create a new balance within the Liberals, which Giolitti had tended to move to the Left, he progressively distanced himself from Giolitti, thus shifting power back to the Right.

President of the Council↑

When the July Crisis came, Italy, still heavily involved in pacifying Libya, was not ready to go to war again to defend purely Austrian interests. Vienna and Berlin had adopted a common hard line with Serbia without even consulting Rome: Salandra felt treated more like a client than an ally. In his view, Vienna had already violated the Triple Alliance when it had occupied Bosnia in 1909 without giving Italy any compensation – as instead provided for by article 5 of the Alliance treaty. Furthermore, the defensive nature of the treaty did not give rise to a casus foederis in 1914. Last but not least, Salandra was confronted with a strong anti-war majority both in the parliament and in the country. He opted for neutrality and declared it on 2 August 1914.

On 6 August, Salandra was contacted by the Entente powers who offered him Trento, Trieste and Valona if Italy would intervene in their favour. Salandra was initially cautious towards these offers, but after Britain intervened on 4 August, and even more so after the Battle of the Marne in September, he realised that supporting the Central Powers had become very risky. Italy depended on imports of vital British raw materials. The Alpine front could be defended against a potential Austrian attack, but the Italian peninsula was completely exposed to Royal Navy attacks. Furthermore, the Italian colonies would be cut off from the motherland in the event of war with Britain. Salandra was also worried that a victory of the Central Powers might lead to reprisal attacks on Italy for having hesitated in supporting its allies.

Yet hoping for the Entente’s success, whether total or partial, was one thing; risking all-out war was another. For the moment, Salandra remained on the fence. In the meantime, Italian public opinion was increasingly split between those who sponsored an intervention against Austria, to complete national unification by annexing the “unredeemed lands” and those who preached neutrality. The former remained a noisy minority in the country, but had gained the support of the military élites and the king.

On 18 October, Salandra delivered his famous “sacro egoismo” speech: Italy would from now on follow its national interests alone. Thence begun a race between the Central Powers and the Entente to gain Italy’s support. Berlin pressed Vienna to reconcile with Italy by offering compensation in the “unredeemed lands”, but Vienna refused until March 1915, when it had become too late. The Entente was ready to offer more than the Central Powers, and agreed with a list of territorial claims from Italy which included Trento, Trieste, Dalmatia, South Tyrol, a protectorate over Albania, and colonial gains in the case of a break-up of the Ottoman Empire. These Italian claims reflected two conflicting principles: that of nationality, aimed at unifying the “unredeemed lands”; and that of pure imperialist expansion, aimed at turning Italy into a “real” great power.

The secret Treaty of London was signed on 26 April 1915. Salandra presented the parliament with the fait accompli the following week. The anti-war majority in parliament would not yield, however, so he was forced to resign on 13 May. Victor Emmanuel III rejected his resignation: the monarch felt personally committed to the London pact. Salandra reshuffled his government: he confirmed Sidney Sonnino (1847-1922), the man of the London treaty, as foreign minister, and replaced Giulio Rubini (1844-1917), the minister of finance, and Domenico Grandi (1849-1937), the minister of war, with Paolo Carcano (1843-1918) and Vittorio Zuppelli (1859-1945), respectively. Rubini and Grandi had opposed the intervention: their replacement with two pro-Entente ministers pressed the parliament to approve the treaty of London and to declare war on Austria-Hungary (23 May).

Salandra hoped for a relatively short war, but he was disappointed. The offensive launched by the Italian chief of staff, Luigi Cadorna (1850-1928), was halted by June and resulted in a prolonged war of attrition both on the Alpine and Isonzo fronts. Salandra found it difficult to direct the Italian military effort. Cadorna repeatedly resisted his attempts to assert political control of military operations.

Salandra also had problems in coordinating Italy’s war with his new allies. The other Entente powers had great expectations of Italy: they hoped that the Italian intervention would decisively turn the tide on the Central Powers. Instead, Salandra declared war on Austria-Hungary alone. This decision on Salandra’s part risked alienating Italy’s allies. Salandra’s problem was that the majority of his ministers disapproved of declaring war on the Ottoman Empire and Germany, because of the financial burden of a wider war, and the partial military preparation of Italy. Furthermore, the war was presented to the Italian public opinion as the “Fourth War of Independence”, or la nostra guerra (“our war”) against Austria-Hungary, to cement the home front. This idea however conflicted with the reality of a coalition war.

Italy’s allies tried to involve Rome further in the Entente’s war, by making war loans conditional to an Italian declaration of war on the Ottoman Empire and Germany. Salandra finally declared war on Constantinople on 21 August. The German issue, however, lasted for another year. The other Entente powers retaliated by excluding Italy from their secret talks on the partition of the Ottoman Empire. Further contrasts between Salandra and his allies originated from conflicting interests in the Balkans, as well as from different views of the best naval strategy for the Mediterranean. Such contrasts cast a shadow on Italy’s relations with its Entente allies which would have serious consequences at the peace table. In the late spring of 1916, following the initial success of the Austro-Hungarian offensive in the Trentino, Salandra was forced to resign. He was replaced by Paolo Boselli (1838-1932).

Salandra played no further wartime role either in the Boselli or Vittorio Emanuele Orlando (1860-1952) cabinets. At the end of the conflict, he participated in the Italian delegation to Versailles and subsequently represented Italy at the League of Nations in Geneva. Politically, Salandra moved further to the right, supporting Benito Mussolini’s (1883-1945) accession to power in 1922. He was made a senator by Mussolini in 1928, and died three years later in Rome.