The Ruhleben internment camp, situated on the outskirts of Berlin, held British civilian internees from its opening in November 1914 to its closure in November 1918. While the camp suffered from overcrowding, conditions were relatively good and inmates developed the social life of the camp into a community.

With the outbreak of hostilities, German authorities interned British citizens in Germany, just as other belligerent powers interned “enemy” civilians. In the opening stages of the war British civilians were left at liberty, with only a handful of suspected spies and saboteurs arrested and detained. However, on 6 November 1914 the vast majority of British civilian males in Germany were gathered for internment at the Ruhleben Trabrennbahn, a racecourse situated in the west of Berlin. Between November 1914 and November 1918 some 5,500 British civilians were held there; the population reached a peak of 4,273 in February 1915 and Ruhleben housed around 2,300 internees at the time of the armistice. Its proximity to the centre of Berlin meant it became the most visited and widely publicised prison camp in the whole of the German Empire.

The Ruhleben camp was around ten acres in size, with eleven barracks to house the internees. Conditions were initially overcrowded as the German authorities had planned for a prisoner population of around 1,500. Nine more barracks were completed in 1915, but it was only toward the end of the war, when the population was reduced to 2,500, that the problem of overcrowding was solved. The death rate in the camp was around sixty out of the total of 5,500 who passed through the camp during the war. This figure is well below the rate experienced in other civilian camps during the war and is helped by the fact that there were periodic repatriations of invalids and those deemed permanently unfit for military service. Admittedly, Ruhleben did not experience serious health scares such as the typhus epidemics that occurred in some prisoner of war camps. However, the years in internment, while not fatal, did take their toll on the inmates’ health.

Ruhleben was by no means a typical camp. The relatively good conditions can be attributed to the camp’s location, a stable inmate population, support from humanitarian organisations and the lack of reprisal punishments. Reciprocity also played a role; Britain and its empire held around 36,000 German civilians in internment by 1917, and any form of punishment against the inmates of Ruhleben would have had consequences for German internees within the British Empire. This good treatment allowed the British inmates to create a rich cultural community in the camp. Ruhleben’s inmates were an extremely diverse group and included people from all social classes within the British Empire. The focus in accounts of the camp was on cultural activities. Inmates engaged in art, theatre, sport and even mock elections to ensure that the "borough" of Ruhleben was properly represented at Westminster. The camp offers an interesting case study of a community during the war. 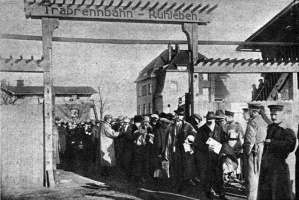 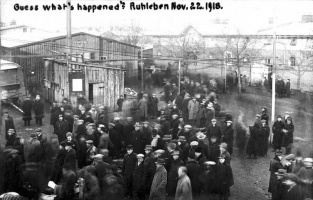 Prisoners after their release from Ruhleben camp, November 1918 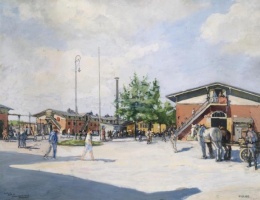 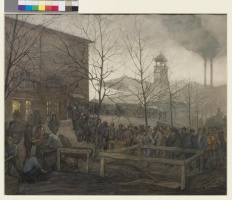