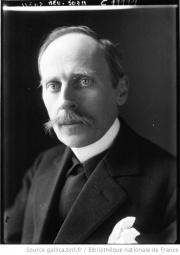 A pacifist writer, Romain Rolland was awarded the Nobel Prize in Literature in 1915. During the Great War, he refused to choose one camp over the other and suffered nationalist attacks. In the post war years, he developed closer ties to the Parti communiste français (PCF), the French Communist Party. But with the German occupation of France during the Second World War, he took refuge in silence.

Romain Rolland (1866-1944) was a French pacifist writer who was world famous during his lifetime. He was also a musicologist and a professor of music history at the Sorbonne University. He lived in Switzerland when the Great War broke out. Too old to be mobilised, he decided to stay in Switzerland. He published numerous articles in the Journal de Genève, some of which were collected under the title Au-dessus de la Mêlée. He was awarded the Nobel Prize in Literature in 1915.

Viewing the global conflict as Europe’s suicide, Rolland joined the Red Cross, refusing to take a side in the war. Consequently, he was violently attacked by nationalists of both camps. At the beginning of the war, a vicious slander campaign was launched in France, labelling him a traitor. As a moralist intellectual, a non-violent humanist and a self-proclaimed spokesman for intellectuals (whom at this time he denounced as warmongers), Rolland placed individual thinking above any collective action.

In the 1930s, Rolland grew closer and closer to the Parti communiste français (PCF), the French Communist Party, and became part of the anti-fascist movement. While France was occupied during the Second World War, he lived in the German occupied zone and took refuge in complete silence until his death. 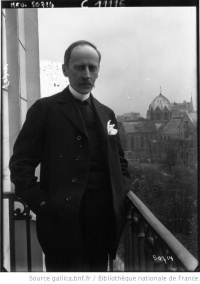 Romain Rolland on a Balcony 1914