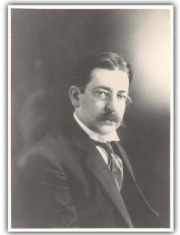 José Enrique Rodó was a Uruguayan writer. His main work Ariel was published in 1900. As a journalist, Rodó reflected his personal interpretation of the First World War.

José Enrique Rodó (1871-1917), born into a wealthy family of Uruguayan merchants in Montevideo, showed an early talent for writing. Economic problems and his father’s death forced him to start working early. In 1895, he helped found the Revista Nacional de Literatura y Ciencias Sociales (National Review of Literature and Social Sciences) that brought modernism to Uruguay. In February 1900, Rodó published Ariel. His life began to change positively: he achieved economic stability and success in both his academic and political life, becoming a member of parliament of the “Colorado” party. However, his political career was frustrated by his confrontation with José Batlle y Ordóñez (1856-1929), the party’s influential leader, which then increased his instability and frequent depression. In 1916, Rodó was appointed European correspondent for the Argentine magazine Caras y Caretas. He died in Italy on 15 May 1917.

Rodó was a prominent essayist who focused on promoting idealism and Americanism. In 1895, he published his first literary brochures on literature’s role in facing end-of-the-century challenges. In 1898, his indignation at the United States’ intervention in Cuba prompted him to write Ariel, published in 1900. His subsequent publications – notably Motivos de Proteo (1909) and El Mirador de Próspero (1913) – focused on the educational philosophy emerging from the concept of self-education and laborious personal and social transformation, symbolized by the Greek mythical god Proteus.

The fourth centennial of America’s discovery (October 1892) led Latin American intellectuals to return to their origins. The Spanish-American War in 1898 and the subsequent Spanish defeat in Cuba harshly impacted both Spain and Hispanic America. Low self-esteem driven by racial, psychological and cultural factors was noted in many Latin American writings. In this context, Ariel had enormous impact, acquiring the strength of both a statement and a symbol. Rodó became the great spokesman of Latin cultural values on the continent; he also warned of nordomanía, attraction to North America. Two elements stood out in Rodó’s work: his outstanding formative influence on youth and his role as a spokesman for Latin American culture.

Interpretation of the War Based on Ariel↑

Between August 1914 and December 1915, Rodó published thirteen articles on the war, twelve in Montevideo and one in Buenos Aires. In 1914, arielismo, defined in 1900 as guarding Latin America’s identity in the face of Anglo-Saxon America’s cultural menace, turned into the apology of the assumed values of Latin Europe, under attack by the German menace. Arielismo was seen as a vindication of Latin cultural values, or Latinity, and as communion with the cause of the Allies, led by France. Since September 1914, Rodó had presented France as the incarnation of the “the Latin genius,” and the cause of France – and her allies – as “the cause of mankind.”[1] Rodó outlined three French values: ruling Latinity, intellectual teaching, and tradition of liberty. Rodó’s writings showed a Manichaean interpretation of the war.

In October 1914, the German institutions of Montevideo requested more press coverage, saying that the attitude of some Uruguayan press might be understandable in “the enemies,” but never in the press of “this country that for many of us is our second homeland, to which we are closely linked by solid ties of blood and affection.”[2]