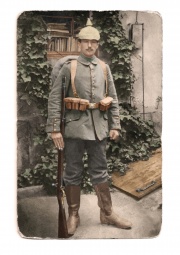 Dominik Richert was a German soldier who deserted during the First World War. He is best known for his wartime memoir, published posthumously in 1989, which highlights the experience of conscripts at the front. Richert’s skepticism and cynicism towards war offer an important perspective on the conflict as perceived by ordinary soldiers.

Dominik Richert (1893-1977) was born into a Catholic peasant family in the German district of Oberelsass in the Reichsland Elsass-Lothringen (annexed to Germany in 1871). He received a school education and then at the age of 13 joined his family in working their farm. He worked on the construction of the local railway branch for several years to supplement his family’s income. Richert grew up speaking the Alsatian dialect at home and German in school and recalled having mostly forgotten his French by the time of the war.

Military Career and Outbreak of War↑

On October 16, 1913 Richert was called up for military service and assigned to the First Company of Infantry Regiment 112 based in Mühlhausen. Richert was 20, and that same year represented a notable deterioration of relations between the population of Alsace-Lorraine and the German Empire. Sparked by the Zabern/Saverne Affair, an incident in which Prussian units garrisoned in the region insulted local civilians, a wave of popular outcry swept through the region. Ultimately, the failure of Wilhelm II, German Emperor (1859-1941) and the military to discipline the officers sowed discord in the press and the Reichstag and contributed to further acrimony and protests across the German Empire. Richert, for his part, resented his training and was taken by surprise at the outbreak of the First World War.

Richert served until November 1914 on the Western Front, where he was injured. After recovering, he was transferred to the Eastern Front in the spring of 1915, as Alsatian soldiers were then seen as a flight risk in the west. He returned to France in March of 1918 to take part in the German Spring Offensive and on the night of July 23, 1918 he delivered himself with two other soldiers to French troops. For this, the German military tribunal sentenced him in absentia to death. He remained in Alsace, which was returned to France after the war.

Richert wrote his memoirs after his desertion and return to Alsace. The manuscript was edited and published in 1989 by Knesebeck and Schuler in Munich as Beste Gelegenheit zum Sterben: Meine Erlebnisse im Kriege 1914-1918. It was subsequently translated into French and English. In 2018, a new German edition that presents the text in its original language without any omissions was published by Richert’s descendants. In Richert’s unsparing account of his wartime experience he rejects the patriotic language of glory and sacrifice. His account punctured historians’ image of the unqualified enthusiasm among recruits and of the Burgfrieden/Union sacrée. Richert’s account of desertion over French lines also encouraged the study of the everyday experience of ordinary soldiers during the war. 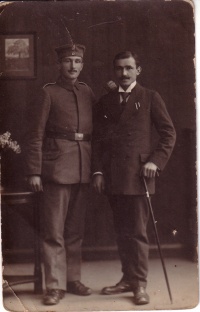