The Renascença Portuguesa (1912-1932) was an important cultural movement during the republican regime (1910-1926) in Portugal. This intellectual group was founded in Porto, in the northern part of Portugal. It supported the participation of Portugal in the First World War and developed intense war propaganda.

The periodical A Águia (“The Eagle”, 1910-1932)[1] and the bulletin A Vida Portuguesa. Quinzenário de inquérito à vida nacional (“Portuguese Life. Bi-weekly query to national life”, 1912-1915)[2] were the official magazines of the organization. The Renascença Portuguesa was one of the most important cultural movements of the First Republic (1910-1926) and during the First World War. During this time, there was intense cultural activity, which was highlighted by the creation of popular universities and the publication of books on literature, art, science, philosophy and social criticism. By 1918, 120 titles had been published.[3]

The Renascença Portuguesa was founded in Porto, in the northern part of Portugal, and most of its members belonged to this region. However, many of its intellectual members were from other cities, such as Coimbra and Lisbon. In fact, the organization had a long list of collaborators and associates in Portugal and abroad, from Brazil, Spain and France.

The Renascença Portuguesa was created at the beginning of the republican regime. This regime represented profound changes in Portuguese society, including a break with the monarchical past and the beginning of a new republican era. Intellectuals developed ideologies and utopian projects and became involved in political and social affairs. These individuals believed they had a special mission and wanted to overcome the national crisis, which had begun in the late 19th century. They wanted to implement deep reforms in Portuguese society.[4]

The Renascença Portuguesa was a republican, patriotic, and conservative intellectual movement. During the First Word War, it was the leading literary movement in Portugal, through which it propagated its support for Portugal’s participation in the war. In this way, it extended its cultural mission and became involved in war propaganda and in politics. In this sense, it acted in the public sphere (re)producing a legitimating discourse about the conflict. The members of the movement supported the Allies unconditionally and developed anti-German sentiments.

The Renascença Portuguesa and the First World War↑

In 1914, the Renascença Portuguesa called for mobilization and invited everyone to get involved, especially its members. It also announced the creation of the Sociedade de Instrução Militar (Society for Military Instruction), an institution designed to educate and prepare young soldiers for the battlefield[5]. This project did not materialize, but showed the commitment of the intellectual movement to the war effort. Moreover, the Renascença Portuguesa published war propaganda leaflets – A Cartilha do Povo (People’s Booklet) - with a circulation of 100,000 copies, which were sold to the Ministry of War.

Between 1916 and 1924, the Renascença Portuguesa also published several books about the war, specifically war memoirs. The most famous books are Memórias da Grande Guerra ("Memories of the Great War") written by Jaime Cortesão between 1916 and 1919 and Nas Trincheiras da Flandres ("In Flanders Trenches") by Augusto Casimiro (1889-1967).

On 9 March 1916, Portugal joined the conflict against Germany alongside Great Britain. A few months later, the Renascença Portuguesa published a special issue in A Águia entitled Portugal e a Guerra ("Portugal and the War").

The director of the magazine, the poet Teixeira de Pascoaes, said that cultural movement would support the participation of Portugal in the war, because it was a patriotic duty.[6] Many of the Renascença Portuguesa’s members, and other Portuguese intellectuals, supported the war through their texts. The philosopher Leonardo Coimbra wrote “O Sentido da Guerra” (“The Meaning of War”), the famous poet Gomes Leal (1848-1921) wrote “O Monstro quer sangue” (“The Monster wants Blood”) on war violence, Henrique Lopes de Mendonça (1856 -1931) wrote “A peçonha germânica” (“The German Venom”), and Raul Proença wrote “Unidos pela Pátria!” (“United for the Motherland!”). Through these texts, it is possible to perceive intense patriotic sentiment, anti-German sentiments and the high level of legitimacy the conflict was perceived to have, as a fight for desired values and attitudes. These works presented the arguments that justified the participation of Portugal in the war. At that time, the war seemed inevitable and beneficial to the country. As a consequence, many men enlisted to fight in the trenches, as was the case with Jaime Cortesão, who became a soldier and fought in Flanders, between 1917 and 1919.[7] Despite the violence and unprecedented nature of the Great War, the conflict became liberating, patriotic and emancipatory in Europe,[8] as well as in Portugal. 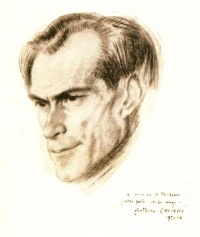 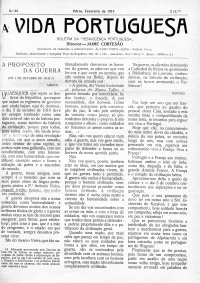