During World War I, about 630,000 people found refuge in the interior of the Kingdom of Italy. They left their homes for different reasons. Some of them were Italian citizens repatriated from Austria-Hungary, Germany and France. Others were Italian-speaking Austrian citizens evacuated from the areas occupied by the Italian army in Trentino and Friuli. The biggest group consisted of Italian citizens who had fled or been evacuated after the Strafexpedition or the Battle of Caporetto.

The issue of war refugees in Italy during WWI is not restricted to those who fled or were evacuated after the Austrian occupation of the Veneto and Friuli in 1917. The subject is far more problematic, and the refugee policies implemented by the government reflect this complexity.

Between August 1914 and May 1915, many émigrés already returned to Italy from France, Germany, Switzerland and Austria-Hungary. According to official figures, at least 42,000 of these were counted as refugees. Official statistics, however, only scratch the surface of a larger migration: for example, in just a few months, about 70,000 people repatriated to Friuli – i.e., 10 percent of the population of the region. Even though most of them found refuge in their former homes, and were therefore not included in the category of “war refugees,” the arrival of this mass of rimpatriati marked the first traumatic impact of the social and economic consequences of war in Italy, which led unemployment and social tension.

While Italy remained neutral, the so-called fuoriusciti also found refuge in the country. These were some 14,000 Italian-speaking Austrian citizens, politically active advocates of separation of the irredentist (unclaimed or “unredeemed”) lands of Trento and Trieste from Austria. Unlike the first group of rimpatriati, these were political refugees who tried to encourage the Italian public and government to join the war against Austria-Hungary. Cesare Battisti (1875-1916) was among them.

After the outbreak of war, the number of refugees increased. Between May 1915 and June 1916, the Italian army occupied several Austrian districts in southern Trentino and in Friuli. Due to the proximity to the front, the Italian authorities decided to evacuate about 47,000 Italian-speaking and 12,000 Slovenian-speaking citizens of Austria, and sent them to the internal regions of the Kingdom. Unlike irredentists, these refugees were forcibly removed from their homes and housed in provinces far away from the front.

Strafexpedition and Battle of Caporetto↑

Except for a few minor evacuations in Friuli (June 1915), until June 1916 the refugees in Italy were exclusively “unredeemed” Austrian citizens and people repatriated from neighbouring states. Only after the Strafexpedition were 76,000 Italian citizens evacuated from the province of Vicenza. This evacuation caused an initial change in the management of refugees issue, which ceased to be a geographically limited problem of public order. After the Battle of Caporetto in 1917, the refugee issue changed once again. At least 250,000 people fled from Friuli and the Veneto, which were occupied by Austrian and German armies. The same amount were evacuated or fled from provinces neighbouring the Piave River.

This wave of Italian citizens fleeing to the interior prompted the government to reorganize welfare for refugees and led to the birth of many charitable associations, since refugees were housed in all the provinces of the Kingdom except Sardinia.

The Refugee as a Hybrid Category↑

Until June 1916, the Italian state did not clarify the difference between these categories of refugees, although they differed both in their reasons for fleeing and their origins. Only after the evacuation of 76,000 Italian citizens in June 1916 did the authorities create a consistent welfare system for displaced people and legally classified them into four categories: rimpatriati (repatriated), profughi (refugees, regardless of whether they were Italian or Austrian citizens), fuoriusciti (political refugees, who made a conscious choice in favour of Italy) and internati (internees, i.e, Italian-speaking Austrian citizens who represented a threat to public order). Until that time, all these different categories had been legally included in the vague notion of profugo (refugee) and often housed in the same places, creating misunderstandings.

More importantly, the semantic vagueness of the concept until 1916 had meant that the refugee was perceived by the police authorities and host populations as a hybrid figure and a suspect. This is especially true for “unredeemed” refugees whose relatives were fighting in the Austrian army. In short, precisely at a time when even Italian citizens became refugees, the whole issue acquired political relevance. Previously, the refugee issue was administered as a question of public order, the management of which was entrusted to the prefects, who acted in a discretionary manner, often exercising control instead of providing assistance.

Caporetto as a Turning Point↑

After the Battle of Caporetto, the relevance of the refugee issue radically changed. The invasion of the country brought with it the need to portray the refugees of Caporetto as heroic victims of the war. This served to strengthen the Italian home front, but also to provide the political representatives of refugees with a unanimous interpretation of the exodus: those who took refuge in the interior regions were depicted as having given up their property in order to maintain freedom. Thus, the suspicion that the ruling classes had fled from the enemy, abandoning their public duties, was denied, although only the clergy had decided to remain in the occupied lands.

Aid for the refugees from the Veneto and Friuli therefore became part of Italians’ patriotic efforts, both in parliamentary speeches and in the press. As a result, assistance for refugees was structured in a more systematic way and the number of relief workers increased. The two institutions that dealt with refugee assistance at central level were the Alto Commissariato per i profughi di Guerra and the Comitato Parlamentare Veneto per l'assistenza ai profughi di Guerra, both established at the end of 1917. Nevertheless, the absence of clear and fixed norms, and the plethora of organizations dealing with the relief work for refugees often lead to overlapping or inconsistent measures in providing assistance. The 60,000 “unredeemed” refugees benefitted only partially from this patriotic effort, since legally they were enemy citizens. As a part of the assistance was managed by spontaneous committees and not by the state, the “unredeemed” were at a disadvantage. Furthermore, because of the patriotic narrative concerning refugee relief, control over personal opinions was tightened and many “unredeemed” refugees suffered internment.

After returning to their homes, those who had fled after the Battle of Caporetto found an atmosphere of deep social tension. The people who had remained in the occupied area had looted everything that was available and, for this reason, were sometimes accused of collaborating with the enemy. Those who had fled were, in turn, accused of civil desertion. The “unredeemed” refugees had been slowly incorporated in the Italian welfare system, but had lived for years as foreigners in Italy, although they spoke Italian. At the end of the war, they returned to their homes and obtained Italian citizenship. However, during the war they had developed a strong aversion to the Italian authorities, who had treated them as suspect. Eventually, there was no place for refugees in the Italian memory of the war. As a result, Italian historians and citizens rapidly forgot the refugees’ war experience. Only from the 1980s onwards have historians examined the issue of war refugees, albeit concentrating their analyses on refugees evacuated by the Austrian authorities. The first detailed study of refugees in Italy was not published until 2006. 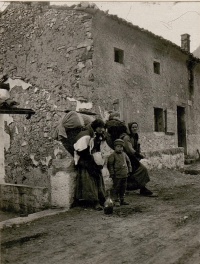 Italian refugees in the Dogna valley or Tolmezzo 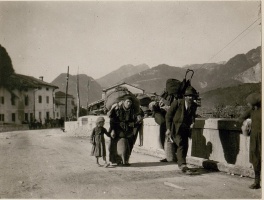 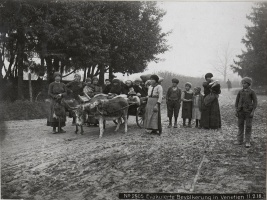 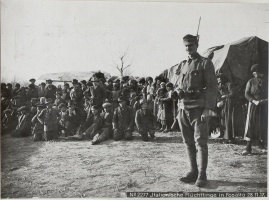