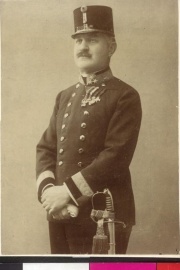 On 25 May 1913 Colonel Alfred Redl, the former head of Austria-Hungary’s military espionage, committed suicide in Vienna. As it turned out, Redl had betrayed Austria-Hungary’s spy-network in Russia and had sold sensitive information on war preparations to the Czar’s military intelligence.

Alfred Redl (1864-1913) was born in 1864 in L’viv (Lwów, Lemberg), the capital of the Austrian Crownland of Galicia and also the most important city in the eastern part of Galicia. In the multiethnic environment of the Habsburg Monarchy’s northeastern province, Redl would pick up Polish and Ruthenian (Ukrainian), as well as German. The son of a railway inspector, he attended a military school in Moravia, served with an infantry regiment of the k.u.k. (Imperial and Royal) Army and was promoted to lieutenant after four years. Redl was one of the few officers from military schools who was accepted at the War School, the academy for future general staff officers. After graduation in 1894 he joined the General Staff, studied Russian in Kazan in 1899-1900 and started out as an expert on Russia in the Evidenzbüro, the military intelligence branch of the Viennese General Staff. Espionage and counterintelligence was the focus of the Kundschaftsabteilung, a specialized unit within the Evidenzbüro. In 1907 Redl became head of the department and deputy head of the Evidenzbüro. In 1912, Redl was promoted to colonel and took over as chief of staff of the VIII Corps in Prague.

Death of a Spy↑

By chance, German intelligence came across a poste restante letter addressed to a person in Vienna who was obviously involved in espionage, probably on behalf of Russia, in 1913. When Redl called for the letter on 24 May 1913 at the Viennese General Post Office, police were able to identify him and track him down at a city hotel. Upon being informed, Franz Conrad von Hötzendorf (1852-1925), chief of the General Staff, and August von Urbanski (1866-1950), head of military intelligence at the time, were shocked. They decided that a commission should confront Redl with the incriminating evidence and immediately question him about his betrayal. Redl admitted to having sold military secrets to foreign powers. After a brief interrogation, the commission left Redl’s hotel room. In the early hours of 25 May 1913 he used the opportunity offered to him and committed suicide.

Although the General Staff tried to avoid any public debate about Redl’s betrayal, journalists got wind of the spy story. The fact that the army’s former spy master had sold secret information to potential future enemies was deeply embarrassing for the General Staff. To make things worse, Austria-Hungary’s counterintelligence had depended on the Germans to catch Redl. On top of this, Conrad also had to worry about the possibility that one of his sons might be implicated in the affair. Redl had sold military secrets to sustain a lifestyle that was far too costly for someone of his pay-rank and without an inherited fortune to make up for the insufficient income. The public focus on Redl’s homosexuality, his predilection for luxury and his greed were certainly a blow to the military’s prestige, but it also helped to detract from flawed counterintelligence structures and insufficient oversight by Conrad and Urbanski.

The heir-apparent of the Habsburg Monarchy and inspector general of Austria-Hungary’s armed forces, Franz Ferdinand, Archduke of Austria-Este (1863-1914), a faithful Catholic, strongly disapproved of the General Staff’s decision to let Redl kill himself. His anger about Conrad’s handling of the affair flared up again as Franz Ferdinand learned of another blunder: In January 1914 it became known that military secrets fell into the hands of an unsuspecting civilian because the Evidenzbüro had failed to screen Redl’s camera when his assets were sold to clear some of his debts. Had it not been for Sarajevo, the Archduke would have fired Urbanski in summer 1914 and sacked Conrad before long.

While Franz Ferdinand was at odds with Conrad’s crisis management, Germany’s General Staff wondered whether Redl might have sold information about plans for coalition warfare to the Entente. As documents from the Viennese war archive that were long missing and resurfaced only a few years ago suggest, the Austro-Hungarian General Staff deliberately misled its opposite number in Berlin about the time span and the extent of Redl’s betrayal. Quite likely, Archduke Franz Ferdinand did not get the whole picture of the investigators’ findings either.

At least from 1907 onwards, Redl had sold sensitive information to France, Italy, and Russia. The material included orders of battle and mobilization plans and as – the military judge in charge of the investigation put it – there was every reason to assume that Redl would have sold any secret he could access. As a high-ranking member of the General Staff for many years, that would have been a substantial part of Austria-Hungary’s war plans and preparations. Indeed, the Russians were able to enhance their knowledge of the Habsburg Monarchy’s military capacity, options and plans. But in 1914, Russia’s successful pre-war military intelligence operations did not have a crucial impact on operations. Thanks to Redl, Austria-Hungary could not count on her own espionage in Russia in the pre-war years of crisis. Because of his tips, Russian counterintelligence had the ability unravel the Habsburg Monarchy’s spy network.