Incessant wars from 1912 to 1922 accelerated socio-political change and facilitated transition from empire to republic. The nation state was founded on civic citizenship and education in the official language. The revolutionary change in the legal system, discarding religious law altogether dismantled former subjugations. The Civil Law of 1926 and secularization mostly benefited gender relations and social change. Although remaining non-Muslims were accommodated by a renewed social contract, the leadership whose political socialization was formed during the waning years of empire, continued with abated discrimination towards them. On the diplomatic front, however, Ankara distinguished itself by reconciliation with former adversaries, and solved outstanding security issues peacefully.

The toll of war on Turkish society was 2.5 million dead. With a population of thirteen million in 1926, Turkey had already become an émigré country, with people coming from the Balkans and Eurasia. It was a microcosm of empire including its non-Muslim population, however diminished.

Greek Orthodox comprised the largest non-Muslim population of the Ottoman Empire. The 1907 census showed 2,823,063 Rum (Ottoman Greeks) who mostly inhabited the coastal regions of the Aegean and Black Sea. During the Balkan Wars (1912-1913) migration of over 150,000 Rum from Thrace and western Anatolia to Greece compelled the respective governments to negotiate a population exchange. Muslim Macedonian refugees were to be settled on properties left by Greeks.[2] But, World War I intervened. During the Greco-Turkish war (1920-1922) close to 200,000 Rum were resettled in central Anatolia. Subsequently, population exchange was appended to the Lausanne Peace Treaty of 1923 at the war’s end. According to the 1926 Greek census, 1,104,216 Rum from Asia Minor were exchanged with 500,000 Grecian Turks.[3] Acculturated in their native countries both groups were to be initially “twice a stranger” in their new abodes.[4] Turkish-speaking Greeks of Cappadocia experienced further estrangement in Greece for at least one generation.[5] The Orthodox Patriarch remained in Istanbul along with resident Rum, whose numbers dwindled during future political vagaries.

Approximately 77,000 Armenians, another constituent people of Anatolia, remained, while 664,000 were murdered or lost to deprivations (40 percent of 1.5 million) during the forced resettlement in 1915.[6] Memories of bloodletting resulted in decades of public silence for Armenians, Turks, Kurds and Circassians alike, plausibly to tame the grief and horror. Most survivors congregated in Istanbul where the elite made a pact with the Republic vouching for loyalty.[7] Armenians kept a low profile, converts to Islam in the provinces kept ethnic identities hidden, while talent continued to flourish in the arts, medical professions, and business.

The status of Kurds remained in flux. Though comprising the second largest linguistic group, Kurds were not considered a minority because they were Muslim. Secondly, Kurdish city dwellers had been conscripted and served in war while their tribal kin did not, engaging instead in pillage, abduction and massacres of Armenians and Turks; some tribes also supported the Russians during the war.[8] Tribes remained restive under the centralized and secular Republic and displayed armed hostility in 1924-5, 1934-5 and 1938-9. Ankara retaliated harshly. Yet, educated Kurds assumed positions in politics and bureaucracy. While intermarriage between Turks and Kurds blurred ethnic boundaries, ideological fault lines, coupled with punitive measures obstructed reconciliation with the entirety of Kurds.

Formal and informal education, compulsory military service, and the spreading of cultural assets were expected to create modern citizens whereby ethnicity would be confined to folklore and cuisine. State scholarships were extended to students from the provinces to study in major cities as well as abroad. Between 1928 and 1945, on average, 120 students were sent annually to Europe.[9] At home, education was stratified (elementary schools, lyceés, and a few universities); training village educators was designed to meet specific rural needs.[10] Positive science, philosophy and logic became part of the curriculum.

Secular culture was disseminated to the folk through People’s Houses, the equivalent of which, in villages within reach, were People’s Rooms.[11] In 1928, the Latin alphabet was adopted – it was compatible with Turkish phonology. Within five years, literacy rates increased from 10 percent to 50 percent. There had been endless debates since the Tanzimat (reform) era of the 19th century concerning simplifying and Turkifying the language.[12] Neither Arabic nor Persian was compatible with the agglutinative Turkish, its phonemes, vowels or syntax; eclecticism in language usage had obfuscated semantics at the expense of gaps between spoken Turkish and “haute” Ottoman. Literature and cultural history reflect this revolutionary change vividly in satire, prose and lyrics.[13]

Formal/informal education and lifestyles were intertwined. Urban lifestyles had been changing since the late 19th century, but change became more evident during the Republic. As of 1923, graduates of men and women teachers’ schools filled much-needed teaching cadres. A simple, but remarkable statement by poet, writer and teacher, Halide Nusret Zorlutuna (1901-1984) pointed to changing mentalities about gender relations. In 1924, she wrote: “We are learning to become friends with men [colleagues].”[14] Women were almost immediately employed in state and local administrations, albeit as support staff, but employed they were. One demand of Ottoman feminists along with their Armenian counterparts since 1913 had been the right to employment.[15]

In the 1930s, state-sponsored polyphonic music was promoted publicly from fledgling radio stations. Among the 300 refugee Jewish German and German academicians and 50 technicians who arrived in Turkey as of 1934 were luminaries such as Paul Hindemith (1895-1963), Carl Ebert (1887-1980), and Eduard Zuckmayer (1890-1972) who contributed to the symphony orchestra, music academies and the opera.[16]

Industrial plants were financed by the Soviets who extended credit without interest and no strings attached. Coal/iron and textile factories were model establishments with housing for engineers and workers, tennis courts and social premises. Health services were relatively successful in eradicating syphilis, tuberculosis, trachoma and malaria. In 1928, Refik Saydam (1925-1937), military medical doctor of bacteriology and the health minister, established the Hıfzısıhha Institute where vaccines against childhood epidemics were produced. Inoculation was made compulsory in elementary and middle schools.

Having assumed responsibility for 64 percent of the Ottoman public debt, social revolutions did not reach all corners of the country for lack of funds, access, as well as outright resistance to “un-Godly” novelties. The Islamists were disgruntled because religious law was abrogated. Leftists were dismayed since revolutionary change did not embrace socialism. While the former remained silent and bided their time, the latter were incarcerated for social criticism. Although the Turkish Communist Party was banned in 1926, it survived abroad. Given Moscow’s control over foreign communist parties, the Republic was leery of leftist proclivities.

Major lessons learned from the late empire formed republican foreign policy principles. These were to avoid diplomatic and political isolation in the international arena, to avoid adventurism in foreign affairs, and not to borrow money. Another pillar of foreign policy was non-involvement in inter- or intra-Arab affairs. Accordingly, Ankara set out to cultivate reconciliation with former adversaries. In 1926, Turkey conceded when Mosul was awarded to Iraq under British mandate by the League of Nations. In 1927, President Mustafa Kemal Atatürk (1881-1938) lectured the national assembly over the merits of signing the Briand-Kellogg Pact. In 1928, one of the many other treaties of reconciliation, arbitration and trade was signed with Italy.[17] In 1934, Turkey joined the League of Nations, and used this forum to air its two revisionist desiderata. One was to regain control and militarization of the Turkish Straits thus far managed by an international commission and the other was to incorporate the sandjak of Alexandretta (a.k.a. Hatay) left to Syria under French mandate.

Reconciliation with Britain began in earnest with efforts by Ankara and London’s ambassador Sir Percy Loraine (1880-1961), culminating in British withdrawal of its objections to Turkey assuming total control of the Dardanelles and the Istanbul Straits at the Montreux Convention of 1936. Reconciliation with France had begun in 1921 when its occupation forces were defeated in south-east Turkey. The League of Nations was in a quandary about Alexandretta, but the French and Turkish general staffs worked around it and the province joined Turkey in 1939.[18] Paris did not want to see Turkey in the German camp once again. The feeling was mutual. Welcoming German Jewish professors as well as non-conformist German academicians in Turkey was a signal of distancing from Berlin. Turkey had no quarrels left with Europe. Nor had it any intention of joining yet another world war, which showed all signs of being in the making.

Diplomats who managed foreign policy represented continuity and change from the empire to republic. Some were new recruits, others continued their careers in the republic bringing along a host of experience and networks.[19] The foreign policy establishment and leaders abided by the pillars of policy until the 21st century: an exception would be the accruing of foreign debts.

The poly-ethnic and multi-confessional empire was no longer but the republic was by no means homogenous despite ethnic cleansing of its borderland populations.[20] Civic citizenship reflected a geographical space with diverse cultures. This resonates in the official title of the country as the Republic of Turkey. However, usually translated as the Turkish Republic, it depicts domination of majority Turks. Taken for granted by the ultra-nationalists, majoritarian outlook did not bode well for religious/ethnic diversity in the long run.

Secularization not only impacted education. Coupled with the Civil Law of 1926 it also impacted lifestyles and benefited women. Diplomatic culture changed into acknowledging limits of power as well as pursuing revisionist purposes: in the case of the Straits and Alexandretta, through diplomatic means. In the aftermath of World War II, the journal, La Turquie Kémaliste (1933-1946) was to change, adjusting to the Cold War. But, the recent re-publication of highlights from it is a tribute to public service during the early republic against many odds.[21] 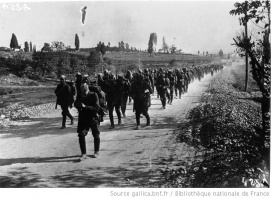 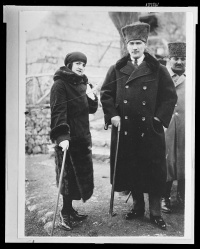 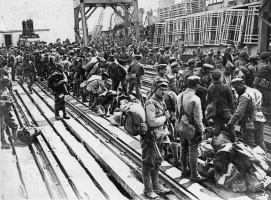 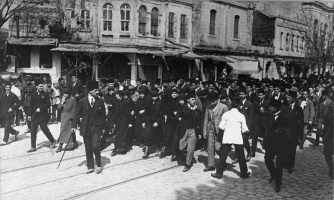