During the First World War, Józef Piłsudski and his followers invented the legend of the Riflemen Association and the First Brigade of the legions. Piłsudski, as the leader of the First Cadre Company of Riflemen, marched into the Polish Kingdom to announce the rebirth of an independent Polish state. A refugee from the Russian partition, Piłsudski depicted himself and his followers as an elite group of patriots who were forced to fight not only Russian tsarism, but also Polish passivity, indifference and fear. Later, as a political leader appreciated by the Central Powers, Piłsudski used the history of the war and the sacrifices of “his” legionnaires as a political tool in conflicts with his opponents, which persisted after 1918.

The political crisis which had been growing in Europe since the First Balkan War in 1912, favoured the plans of Polish national movement. Józef Piłsudski (1867-1935), previously a Russian prisoner in Siberian exile, planned to organize Polish military squads within the Austro-Hungarian army, counting on the outbreak of a Polish uprising in the Polish Kingdom caused by war between Austria-Hungary and Russia. On the eve of the Great War, Galicia became the base for Polish independence activity.

The March of the First Cadre Company on 6 August 1914↑

On 30 July 1914, Józef Piłsudski announced, with the acceptance of the Austrian command, the mobilisation of the Riflemen Squads, expecting war to erupt quickly between Austria and Russia. He planned to invade the Kingdom of Poland with the Riflemen and provoke the outbreak of an uprising against Russian rule. For Piłsudski, complete success would have meant the occupation of Warsaw before the Central Powers’ armies could arrive. He also wanted to announce the establishment of the National Government in Warsaw. On 3 August in Cracow, the First Cadre Company was formed from 144 riflemen (mainly students). Piłsudski defined them in his short speech as “Polish soldiers,” revealing their future task: the creation of cadres for a Polish army. On 6 August 1914, the Habsburg monarchy declared war on Russia. The First Company marched from Cracow towards the Austro-Russian border and entered the Kingdom of Poland.[1]

The territorial base for the development of Polish statehood was situated in the area between the Austrian border and the city of Kielce which had been in the Russian partition. Forming an army was to be the first stage in the process of reconstructing Poland. In the independent “Piłsudski’s state” one principle took first place, which Piłsudski had announced in his officers briefing: to proceed as if the Austrian power did not exist.[2] Despite the Russian conquest and devastation of Kielce on 12 August, the expected uprising against Russian rule did not happen due to fear of Russian vengeance.

Facing the early failure of the plan to provoke a Polish uprising, the Austrian authorities soured on the idea of Piłsudski’s Riflemen and demanded their disbanding. However, the Riflemen were saved by the quick action of Galician politicians, who on 16 August announced the creation of the Chief National Committee (Naczelny Komitet Narodowy, or NKN). This group filled the role of political representation for the Polish forces, which could exist in the form of so-called “Legions” subordinated to Austria. Two legions came into being – the eastern legion in Lwów and the western legion in Cracow. Piłsudski took over the command in the first regiment, later known as the First Brigade of the Legions.

Legion myth portrayed Piłsudski’s soldiers as exiles who were forced by the Russians to leave their homeland – the Kingdom of Poland – like Piłsudski himself. Supported by their comrades from Galicia, they returned as heroes of the fight for Polish independence.[3] For propaganda purposes, Piłsudski exaggerated the difficulties caused by his powerful enemies. In Piłsudski’s opinion, the company had been badly armed and equipped. According to the reminiscences of one of its members, however, this was not so. The equipment, stores of ammunition, and the complete uniform (the grey rifleman’s summer uniform), distinguished the First Cadre Company from other units.[4] Piłsudski’s propaganda contrasted the Riflemen – as the leaders of the fight for Polish independence – with the silent and passive majority of Polish society, which did not want to risk actively opposing Russian tsarism. The liberation of Kielce became a symbol of the loneliness of the Riflemen heroes ignored by their fellow countrymen who closed their shutters instead of welcoming the Polish soldiers. The reality was considerably more complicated, though the symptoms of reluctance towards the Riflemen were visible.

The First Company became the foundation for the cadres of the future Polish army. Thirteen of its soldiers attained the rank of general between 1918 and 1945. The formation also distinguished itself with its predominant number of recruits from the intelligentsia. The large number of poets among the Riflemen helped to create its own legend. The image of the Riflemen highlighted youth and energy and announced a glowing vision of the future Polish state.[5]

In the years 1914–1916 about 30,000 to 35,000 of the First Brigade soldiers served on the front lines of World War One. Thanks to the Legions Piłsudski became the true leader, whose important role was fully valued in Berlin and Vienna. He knew that the most important thing was to minimise Polish losses as their sacrifice would not improve the political position of Poland. Piłsudski supported the idea of the Legions until the Russians had been visibly defeated. When he changed his attitude towards the Central Powers at the end of 1916, he began to liquidate the Legions as they were formations that could be used by the Austrians and Germans to influence Polish politics.

Legion legend portrayed the effectiveness of Piłsudski’s faction in the fight against the torpor and passivity of Polish society during the First World War. The Legions were said to have shattered indifference, teaching the Poles to think and act as patriots again. The unusual fate of the Legions and their commandant seemed to confirm the truth of the myth. Piłsudski was arrested and imprisoned in Germany where he could only wait for a better future. The remaining legionnaires were imprisoned in internment camps or were conscripted into the Austro-Hungarian army. This defeat was transformed into total victory with the collapse of the Central Powers in the autumn of 1918. It caused the rapid end of the occupation and the rebirth of Poland.

Though in 1920 Piłsudski had already been designated as a “Great Builder of Our Motherland,” it was only in the second half of the decade when cult expressions, such as “Builder of Poland,” “Resuscitator of Poland,” “Creator of Polish freedom,” and “Creator of Independence,” predominated. The history of the fight for independence was dominated by Józef Piłsudski and the First Brigade, which diminished the role of the Second Brigade, the First Polish Corps of Józef Dowbor-Muśnicki (1867-1937) and the “Blue Army” of General Józef Haller (1873-1960).[6] Their fight for Poland’s freedom was incomparable to the First Brigade’s achievement.

Before the May coup d’état of 1926 in Poland there was further discussion about the process of regaining independence. The social response to the legionary tradition was ambiguous. In the years 1933-1934 there was a dispute about the words of the “First Brigade” song. Piłsudski’s followers wanted to include these lyrics to the national anthem Jeszcze Polska nie zginęła, but they were not successful. 6 August – the day of the First Cadre Company’s departure from Cracow in 1914 – became a holiday exclusively for Piłsudski’s followers. The celebration was directed only at the combatants of the First Brigade, without the veterans of the Second and Third Brigades of the Legions.[7] There was an additional dispute about the proper date of Polish independence which was not celebrated until 1926. Until the end of the Second Polish Republic in 1939, the memory of the events from the years 1914-1918 divided society more than united it.

After the rebirth of the Polish state on 11 November 1918, Józef Piłsudski filled the role of the temporary chief of state of Poland. The years between 1918 and 1920, as well as between 1926 and 1935, when Piłsudski filled the role of leader of the new state were also the years of the reconstruction of a new Polish historical consciousness. The myth of the leading and solitary role of Piłsudski’s legionnaires, which underestimated other military units, not only simplified and falsified the view of the latest events in 1914-1918, but also built a narrow picture of the whole 19th century. Given such a situation, Piłsudski’s legend quickly found its opponents who countered with the role of the leaders of National Democracy – Roman Dmowski (1864-1939) and other Polish military commanders such as Dowbor-Muśnicki or Haller in the decisive battles for the freedom of the state. This discussion lasted until the outbreak of the Second World War and deeply divided the political elites and society. 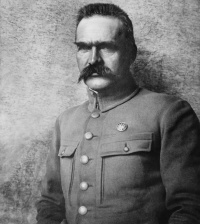 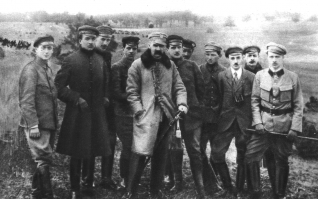 Piłsudski and the leadership of the Polish Military Organization 1917