The Związek Legionistów Polskich (Polish Legionaries Union), or ZLP, was an association of veterans of Polish Legions who had fought under Józef Piłsudski for Poland’s independence during the First World War. The ZLP was active from 1922 to 1939, and it lent its support to the Piłsudski regime from 1926 to 1935.

The Origins and First Years of the ZLP↑

Polish combatant organizations, which were established after 1918 and whose names referred to the First World War, brought together veterans of the fight for Polish independence. One of the most important organizations was the Związek Legionistów Polskich (Polish Legionaries Union), or ZLP. The ZLP united the veterans of Polish Legions who fought under the command of Józef Piłsudski (1867–1935) from 1914 to 1917. The ZLP consisted of participants in paramilitary organizations created in Galicia before 1914. The first congress of the ZLP took place in Cracow in 1922. The movement’s inspiration came from the idea of mutual help for all members and the need to serve the cause of rebuilding the Polish state. The date of proclamation of the ZLP, 6 August 1922, was deliberately set on the eighth anniversary of the First Cadre Company of Józef Piłsudski's Riflemen Associations’ departure from Cracow. In the organization’s statutes, 2,500 members proclaimed their "unconditional loyalty to Józef Piłsudski." The ZLP aimed to support the Polish state; democratize Poland based on the Constitution of March 1921; cultivate the legionary tradition in various forms; provide educational and cultural activities, mutual aid, moral help, and material support for cripples, widows, and orphans; and care for the graves of legionaries.

In its early stages the ZLP did not play a significant political role. From 1922 to 1924 it established its organizational structures, led self-help activities, and decided on its program. ZLP leaders consciously avoided any direct political commitment, but the ZLP did have social tasks to achieve: educating Polish society in the spirit of state service, contributing to "moral reconstruction," and reducing political party infighting. Another important purpose was to prepare Polish youth for national defense. These postulates showed the dominant influence of socialist beliefs among the members.

The ZLP initially wanted to cooperate with the Union of General Józef Haller’s (1873–1960) soldiers (Związek Hallerczyków). The ZLP delegates to the meeting of Haller’s soldiers were instructed to "neutralize the political influences" of other parties among these soldiers and to oppose their criticism of Piłsudski; this kind of criticism was considered a violation of camaraderie and solidarity among ZLP members.

Though they wanted to cooperate with one another, the ZLP, Haller’s Union, and the Organization of Veterans of the First Polish Corps of General Józef Dowbór-Muśnicki (1867–1937), Stowarzyszenie Dowborczyków, differed in their political sympathies. During the parliamentary elections in November 1922, the ZLP supported the left-wing parties, while other organizations voted for the Christian Union of National Unity (Chrześcijański Związek Jedności Narodowej). After the assassination of President Gabriel Narutowicz (1865–1922) on 16 December 1922, ZLP officials issued a resolution condemning the attitude of General Haller, who - as a supporter of National Democracy - was held morally co-responsible for the attack.

From 1924 to 1925 the ZLP was involved in propagandist action for Piłsudski's return to the army and public life. From 1923 to 1926, the conflict between Piłsudski and the government of Wincenty Witos (1874–1945) was growing. Piłsudski's followers started a propagandist campaign against his enemies and they decided to use the ZLP to enlarge their social base. Politicians from Piłsudski's faction appeared among the leaders of the ZLP. They introduced new political postulates, including a proposal to establish a parliamentary circle of the legionaries. When Walery Sławek (1879–1939), a close associate of Piłsudski, became the president of the ZLP in 1924, their activity became more intensive and effective; this efficacy was sustained by cooperation with many experienced activists from Piłsudski's movement, including propagandists and journalists. Walery Sławek appointed a new political section of the central administration of the ZLP under his personal supervision. This was crucial in the transformation of the Union to the pro-Piłsudski organization. In the official newspaper of the ZLP, journalists demanded a change to the organization’s activity. Instead of concentrating on matters of the past, they argued that the ZLP should become more involved in public life. Elections in local chapters helped to strengthen the organization by including more dynamic members. In public meetings, the members of ZLP expressed their support for Piłsudski, and strongly criticized the internal politics of the government, which - in their opinion - only worsened the political crisis.

As a result of the May Coup of 1926, Józef Piłsudski took power in Poland. The Polish Legionaries Union became an ideological background for the new regime and transformed into a recruitment base for its followers. After 1926 the ZLP became more and more dependent on Piłsudski's political parties: the Nonpartisan Bloc for Cooperation with the Government (Bezpartyjny Blok Współpracy z Rządem) and the Camp of National Unity (Obóz Zjednoczenia Narodowego). ZLP members were promoted in the army, closely binding their existence with the political establishment.

In 1928 the ZLP became a part of one of the largest Polish former military organizations, the Polish Federation of Trade Defenders of the Fatherland (Federacja Polskich Związków Obrońców Ojczyzny), but it kept its autonomy and political role. The essential responsibility of the ZLP was organizing annual congresses. These congresses - often directed by Piłsudski himself - had a solemn air.

A network of institutions related to the ZLP came into being across Poland. Despite its privileged position in the political life, economy, and culture of interwar Poland, the ZLP never contributed decisively to interwar politics because its leaders lacked political experience, and because structural problems weakened the organization.

After Józef Piłsudski died in 1935, his successor, Marshal Edward Rydz-Śmigły (1886–1941), tried to keep the ZLP in line. The radicalization of the ruling elite (Sanacja), however, caused a split in the ZLP. Nevertheless, the ZLP remained loyal to the government until 1939. It continued to fulfill its basic statutory function of organizing self-help for those injured in the war. The organization used various foreign contacts, appointing messengers in western Europe and using them to support Polish interests. The Polish Legionaries Union ceased its activity in September 1939 when the Second World War broke out. After the war the organization did not continue its activity and it was formally liquidated in 1951. 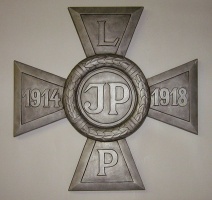