During the Russian Civil War, peasant uprisings swept the former Russian Empire. In 1918 and 1919, these uprisings were mainly local responses to requisitioning and conscription. In 1920 and 1921, the uprisings became larger in scale, above all in Tambov. The revolts helped defeat the Whites and forced the Bolsheviks to change economic policies.

The clash between revolutionary Reds and counter-revolutionary Whites has often been at the centre of narratives of the Russian Civil War. However, a major force driving the course of events was the spate of peasant uprisings that erupted throughout the former Russian Empire. These uprisings contributed to the defeat of the Whites and forced the Bolsheviks to make concessions in their agricultural policy. Historians' appreciation of the importance of the Russian peasantry has benefited greatly from local studies made possible by the opening of the Soviet archives. The most extensive uprising, in Tambov province, has been the subject of particular attention.

New research shows that, following the collapse of the Romanov dynasty, violence became a frequently-used tool to resolve disputes in the Russian countryside. The outbreak of the Civil War exacerbated this violence. To protect their villages from requisitioning parties, peasants formed militias in which frontoviki, soldiers returning from the First World War, played an important role. Bands of peasant deserters took to brigandage, and charismatic commanders created their own independent units of peasant insurgents. The most famous of these commanders was the putative anarchist Nestor I. Makhno (1889­–1934). Almost as important was Nikolai Grigor'ev (1885­–1919), who led uprisings against all the regimes established in the Ukraine. Contemporaries and historians have often referred to some or all of these various forces as "Greens," probably in reference to the forests in which they hid. However, few groups applied this term to themselves. Moreover, while the aims of the peasants and independent warlords such as Makhno and Grigor'ev sometimes aligned, frictions also often existed between them. Their bands had cores of more or less full-time insurgents, many of whom fought throughout most of the Civil War, and locally mobilised peasants only temporarily boosted their numbers. Thus, the warlords’ insurgent groups had much in common with the peasant uprisings, but were not exactly the same. However, the distinctions between them were often fluid.

In 1918 and 1919, peasant resistance came in many forms. Peasants hid their grain, refused to plough their land, or ran away to avoid conscription. Mobilisation orders or requisitioning parties could provoke spontaneous armed peasant resistance. Often, this would die down after the arrival of a punitive expedition, but sometimes peasants would send representatives to other villages calling for help and spreading resistance. Peasants involved in these larger rebellions often adopted political slogans and symbols. Above all, they claimed the legacy of the revolution from the Bolsheviks for themselves and called for genuine autonomous Soviet power, free of party dictatorship. The largest uprisings attracted deserters and Red Army mutineers. The traditional political parties - even the Socialist Revolutionaries, who saw the peasants as their natural constituency - often lacked influence in these displays of resistance.

In March 1919, a revolt took place in the rural Volga districts of Syzran', Sengilei, and Stavropol'. Called the war of the chapany after the kaftan-like costume of the peasant insurgents, it was the largest anti-Bolshevik uprising before 1920. On 3 March, peasants clashed with a food brigade in the village of Novodevich'e (Sengilei district). They held a meeting, armed themselves, and sent proclamations to neighbouring villages with a call to join the revolt. New uprisings broke out and the rebellion had, at its height in the second week of March, spread to almost half of the territory in the Syzran', Karsun, Sengilei, and Stavropol' districts. The peasants condemned the Communists as betrayers of the revolution and called for genuine Soviet power. They killed party and governmental officials and took their revenge on food-requisitioning brigades. Peasant forces destroyed telegraph poles and railway tracks, not out of a primeval peasant opposition to modernity, but in order to hinder the Bolshevik punitive response. Party authorities in Samara and Simbirsk raised 13,000 troops, which received reinforcement from part of the 4th Army. On 15 March, the troops took the last rebel stronghold in Novodevich'e. Despite differences in the social and national structure of the peasantry, uprisings ran a similar course elsewhere: from Zvenyhorodka district in the Ukraine, where in summer 1918 peasants rebelled against German requisitioning brigades, to the Mariinska district in Western Siberia, where in spring 1919 peasant deserters fought Aleksandr V. Kolchak's (1873–1920) troops.

The uprisings created immense problems for both the Reds and Whites, forcing changes in policy. For example, the Bolsheviks abandoned the unpopular committees of poor peasants in November 1918, in response to rural unrest. The rebellions in spring and summer 1919 were prerequisites for major breakthroughs made by the White armies that year. However, as the White armies advanced, the peasants would often end their opposition to the Bolsheviks, seeing the White generals as the greater danger. Peasants were afraid to lose the land they had taken during the revolutionary turmoil. In October 1919, when Anton I. Denikin (1872–1947) had reached Orel and was threatening Moscow, the number of uprisings decreased and the desertion rate dropped; 250,000 deserters returned voluntarily to the Red Army.

It is therefore hardly surprising that the largest and most extensive peasant uprisings took place following the defeat of the Whites. This marked a new stage in the Civil War. In August 1920, the peasants of the village of Kamenka in Tambov province attacked a grain collection detachment, sparking an uprising that spread from village to village in the southeastern part of the province. Aleksandr S. Antonov (1873–1922), who had commanded a group of anti-Bolshevik partisans in the area since summer 1918, became the uprising's leader. The movement created a central military command and established a network of village cells (Unions of the Toiling Peasantry) throughout the Tambov countryside. At its height, the partisan army had a mounted force of 20,000–30,000. The insurgents' programme of overthrowing the Bolsheviks in favour of a Constituent Assembly sought to establish the movement as the true heirs of the 1917 Revolution, as well as present them as a national rather than regional power. It took the Bolsheviks over a year and around 100,000 Red Army troops to defeat the uprising.

Another major rebellion was the war of the Black Eagle and the Farmer, in February and March 1920, in the Volga region. At the revolt's highpoint, 26,000 peasants fought the Bolsheviks. In early 1921, an uprising erupted in the province of Tiumen' in Siberia, where the peasant army numbered about 20,000. It captured the city of Tobol'sk, where it created a short-lived government at the end of February. Most historians now agree that the Bolshevik stigmatisation of these insurgents as kulaks (rich peasants) is inaccurate.

By 1922, the Bolsheviks had stamped out the major uprisings with a combination of punitive measures and compromise. They had created the Red Army, a military instrument that the peasant rebels could not match in numbers or equipment. The Bolsheviks also offered amnesties to insurgents and, with the introduction of the New Economic Policy, signalled a change to their agricultural policies that was more acceptable to peasants. Indeed, in this sense, the peasant uprisings were successful, winning a temporary end - until the introduction of collectivization - to many policies they despised. 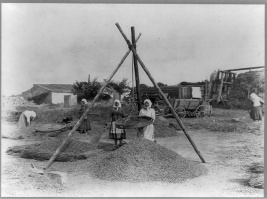