Friedrich von Payer was vice-chancellor of the German Empire from November 1917 to November 1918. In November 1918, he was offered the position of Reich chancellor, which he declined. After the First World War, Payer became a founding member of the German Democratic Party (DDP), one of the few parties to offer unconditional support to the new republic.

Born in the university town of Tübingen, Friedrich Ludwig von Payer (1847-1931) first attended the Lutheran Theological Seminary at Blaubeuren, before he studied law in his native city. After establishing himself in the legal profession in Stuttgart, he helped to found the “Fortschrittliche Volkspartei” (Progressive People's Party, FVP), which carried on the liberal heritage of 1848. Before this, Payer belonged to the “Süddeutsche Volkspartei” (South German People’s Party), one of three smaller liberal parties that merged to form the FVP.

As a member first of the city council, then of the Württemberg state parliament, Payer represented the district of Reutlingen, Tübingen and Rottenburg. For almost this entire period (1893-1912), Payer was also president of the state parliament and a member of the FVP. His term as deputy of the German Reichstag lasted from 1877 until 1918.

As the leader of the FVP faction, Payer was a key actor in Reichstag politics, making over thirty trips to Berlin between 1915 and 1917. Chancellor Theobald von Bethmann Hollweg (1856-1921) was removed from power by an intrigue of the Army High Command in July 1917. In the ensuing governmental crisis, Payer was appointed vice-chancellor on 12 November. Supported by Conrad Haußmann (1857-1922), also of the FVP, Payer chaired the “Interfraktioneller Ausschuss” (Inter-party Committee), which coordinated the work of the Social Democratic Party, the (Catholic) Centre Party and the FVP. Under Payer's leadership, the FVP worked towards fundamental constitutional reform, in order to strengthen the position of the Reichstag. He opposed unconditional submarine warfare, as well as extensive annexations in the East. Instead, Payer advocated peace negotiations with the Allies as outlined in the “Friedensresolution” (Peace Resolution) from July 1917, which the FVP signed.

Chancellor Georg von Hertling (1843-1919) resigned on 30 September 1918, in the face of unavoidable military defeat. Payer was one of only two candidates whom the parliamentary majority would accept. This was a unique opportunity in the history of the German Empire: the highest political office was within the grasp of the leader of a left-leaning party. Payer refused, explaining that his allegiance was to Hertling. Payer remained vice-chancellor, and continued to exercise substantial political weight; he saw his candidate of choice, Prince Max von Baden (1867-1929), appointed Reich chancellor on 3 October.

In November 1918, the Deutsche Demokratische Partei (German Democratic Party) was founded as a successor to the original FVP. It was one of the few parties, along with the Social Democratic Party, which stood unconditionally behind the new republic. Famous members included Max Weber (1864-1920), the liberal politician Friedrich Naumann (1860-1919), Theodor Heuss (1884-1963), later the first president of the Federal Republic, Walter Rathenau (1867-1922), who became foreign minister in 1922, and Hjalmar Schacht (1877-1970), the president of the Reichsbank. Three months later, Payer was elected chairman of the new party. It was also in the first months of the new government that Payer took part in the National Assembly at Weimar, where he was one of only seven members of his party to vote for the acceptance of the Treaty of Versailles in June 1919. In 1920, at the age of seventy-three, Payer retired from politics. He joined the supervisory boards of several companies, where he was able to put his legal expertise to good use. Payer died on 14 July 1931 in Stuttgart. 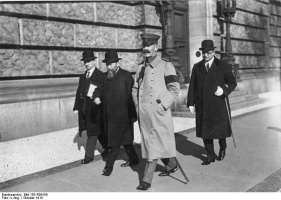