Paris Guns refer to the German long-range guns that fired intermittently on Paris in 1918. A prodigy of the ballistic technology designed to terrorize the Parisian population, these weapons – also known in France as “Berthas” and thus commonly mistaken with “Dicke Bertha” – profoundly dampened French spirits while nonetheless failing to obtain the results expected by the German General Staff.

The Paris region was intermittently under fire from long-range guns from 23 March to 9 August 1918. Referred to in Germany as the Pariser Kanonen, the Wilhelmrohr (Wilhelm’s barrel, in reference to the Kaiser) or the Wilhelm Geschütz (Wilhelm’s gun), three such cannons were manufactured. The guns were designed by the Krupp factories under the direction of Professor Fritz Rausenberger (1868-1928) in the chief artillery department of the Essen-based firm. The guns could reach as far as 130 kilometers and used 21 cm to 23.2 cm caliber shells.

The guns were initially installed on the Mont-de-Joie north of Crépy-en-Laon, at three shooting locations 120 kilometers from Paris. These were identified as Stellung XV, XVI and XXIII. Building on the offensive success of Picardy and the Chemin des Dames, two new positions were added: Stellung XXV was installed in the Bois-de-Corbie in Beaumont-en-Beine, a town near Ham, 110 kilometers from Paris, and Stellung XXXII was established in the Aisne, 91 kilometers from the capital, at a place called Bois-des Bruyeres near Fère-en-Tardenois.

Designed and implemented in the greatest secrecy, these guns’ mission was to undermine the French population’s morale by bombing Paris. Four rounds were carried out, the first three corresponding to the large-scale offensives and spread out over six months, from 23 March to 1 May 1918, 27 May to 11 June 1918, 15 to 16 July 1918 and 5 to 9 August 1918. During these four periods, 256 Parisians died and 625 were wounded.

Approximately 320 projectiles were fired during forty-four days of actual shooting. The climax of this terror operation was without doubt the afternoon of 29 March 1918, when a projectile fired from Stellung XXIII fell on one of the pillars supporting the roof of the Saint-Gervais-Saint-Protais Church behind City Hall. The force of the impact caused part of the roof to collapse; the projectile exploded inside the nave. To make matters worse, that Friday the church was full of people attending a liturgical music concert. Seventy-five were killed and ninety wounded in that one strike. This tragedy was all the more important given the fact that were many members of Parisian high society among the dead, including the councillor of the Swiss delegation, Henri Stroehlin (1876 ? -1918) and his wife, retired brigadier general Léon Francfort, Miss Elisabeth Bastin (1902 ?-1918), daughter of the Belgian consul general, several members of the nobility, among them Baron Pierre de Coubertin’s (1863-1937) sister-in-law, baronne Violette de Coubertin (1860-1918) born Machiels. A former senator, Louis Gotteron (1849-1930) was wounded.

Despite this dramatic episode, the efficiency of the Paris guns never lived up to the hopes of their creators. Due to their shells’ limited power, they never really terrorized the population of Paris. 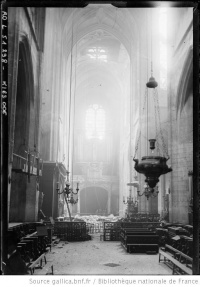 Church of Saint-Gervais-Saint-Protais in Paris after bombardment, 29 March 1918 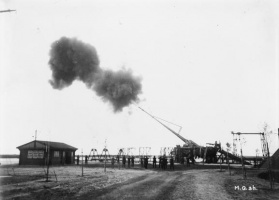