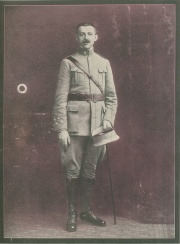 The army major and university teacher Sidónio Pais served as the Portuguese minister (ambassador) in Berlin between August 1912 and March 1916. In December 1917, after a military coup, Pais became president of the Republic. He was murdered in December 1918 by a left-wing activist.

Sidónio Bernardino Cardoso Silva Pais (1872-1918) was the oldest of seven boys. His father, a public servant, died when he was eleven years old. For some years Pais lived with his uncles and cousins. He studied at the University of Coimbra from 1887 to 1890. He then joined the army and later entered the Military Academy in Lisbon. In 1895, back at Coimbra, he graduated with a degree in math. He went on to complete a PhD in 1898 and become a university professor. He adhered to the ideals of republicanism.

The Republic and World War I↑

After the proclamation of the Portuguese Republic on 5 October 1910, Pais served as deputy minister of development (September-November 1911) in the moderate government led by João Chagas (1863-1925) and finance minister (November 1911-June 1912) in the moderate government lead by Augusto de Vasconcelos (1867-1951). From August 1912 until the German declaration of war in March 1916, he served as the Portuguese minister (ambassador) in Berlin. There he promoted the new republican image of Portugal and followed the (not so) secret British-German negotiations concerning dividing up the Portuguese colonies Angola and Mozambique, in an attempt to appease Berlin. However, the development of the colonies was a cornerstone of the Republic. This ambiguous situation was not solved with the beginning of the war. In fact, Portugal kept its neutrality, while supporting Britain and maintaining border skirmishes with German troops in Africa.

In Berlin, Pais attempted to conciliate the growing interventionist approach of the Democratic Party led by Afonso Costa (1871-1937) with his worries of a conflict with Germany. After the declaration of war, he returned to Portugal and became increasingly involved in politics with the support of Brito Camacho (1862-1934), leader of the Unionist Party.

The war profoundly divided society and soon had ruinous economic effects. Sidónio Pais recruited soldiers and officers and overthrew Costa’s government between 5 and 8 December 1917. He went from coup leader to prime minister and president of the Republic. With the support of moderate republicans, monarchists, Catholics and the trade unions, he devised a presidential regime, the so-called República Nova (New Republic). This right-wing approach attracted some monarchists and Catholics. Pais reversed Costa’s controversial law of separation between church and state and restored diplomatic relations with the Vatican.

Sidónio Pais cultivated a close relationship with the masses. He always wore a military uniform and developed a populist vein. His charming personality and charismatic popularity has convinced some scholars to consider this political experience as a kind of fascist anticipation. Pais became a reference for the inter-war Portuguese authoritarian right wing and influenced António de Oliveira Salazar’s (1889-1970) Estado Novo (New State) regime.

In April 1918 the demoralised Portuguese army suffered a major defeat in Flanders. The remnant units were dispersed in the British divisions and assigned non-fighting tasks. Furthermore, for some time the Portuguese army had not received reinforcements, leading to accusations of germanophilia against Sidónio Pais. The war’s end, difficulties repatriating troops, the influenza pandemic, and growing unrest undermined Pais’ political and social support. On 14 December 1918 he was murdered by a left-wing activist. Soon after, Fernando Pessoa (1888-1935) wrote the poem The President-King, thus emphasising a long-lasting myth. 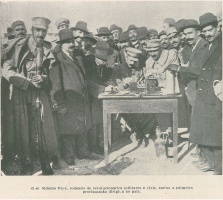 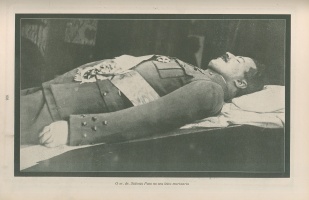