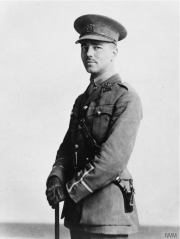 Wilfred Owen was a poet and soldier who wrote some of the most memorable poems of the First World War. His theme of "the pity of war" continues to influence the cultural memory of 1914-18 and to shape ideas of war itself.

Wilfred Edward Salter Owen (1893-1918) was born to Susan and Tom Owen on 18 March 1893 at Plas Wilmot, Oswestry, Shropshire. An avid reader and devotee of poetry, Owen was educated at the Birkenhead Institute and at Shrewsbury Borough Technical School. He hoped to proceed to university, but having failed to win a scholarship to the University of London, he took up a post as a lay assistant to the vicar of Dunsden near Reading in 1911. He was working as an English tutor in France when war broke out in 1914.

Initially, the outbreak of war affected Owen "less than it ought" for, as he wrote to his mother, “I can do no service to anybody by agitating for news or making dole over the slaughter.”[1] But his attitude changed and by June 1915 he informed his mother that he “intensely” wanted “to fight”.[2] Owen enlisted in the Artist’s Rifles in October 1915, was commissioned second lieutenant in the Manchester Regiment in 1916, and trained variously in London and the north of England before embarking for active service in January 1917. During this grim winter on the Western Front, Owen described his frontline experience in his letters, characterising No Man’s Land as “the abode of madness”.[3] Diagnosed with neurasthenia as a result, firstly, of concussion in March, then, in April, from being blown into a railway cutting where he lay next to a dead officer for several days, Owen was sent to Craiglockhart Military Hospital for treatment. Here in August 1917 he met Siegfried Sassoon (1886-1967), from whom he “learned how to channel memories of battle” in poems such as “Dulce et Decorum Est”.[4] While on home duties in England during the last year of his life, Owen wrote and revised his most famous poems, including “Insensibility”, “Strange Meeting”, and “Exposure”. He returned to active service in September 1918 and for his “conspicuous gallantry and devotion to duty” during an attack in October, he was awarded the Military Cross. Owen was killed one week before the Armistice, while attempting to cross the Sambre-Oise canal at Ors with his battalion the 2nd Manchesters.

Owen the poet was virtually unknown in his own lifetime, except to a coterie of London literary figures and the readers of The Bookman and The Nation, which published the five poems he saw in print. But his posthumous reputation grew steadily at the hands of editors who were also poets: Poems by Wilfred Owen (1920), edited by Siegfried Sassoon and Edith Sitwell (1887-1964), with an introduction by Sassoon, The Poems of Wilfred Owen (1931) edited with a memoir and notes by Edmund Blunden (1896-1974), and The Collected Poems of Wilfred Owen (1963) edited by Cecil Day Lewis (1904-1972) which included nineteen previously unpublished poems. Despite being rooted in the cataclysm of 1914-18, Owen’s themes transcend his historical period: disquiet at patriotic rhetoric and enlistment enthusiasm (“Anthem for Doomed Youth”, “Dulce et Decorum Est”, “The Send-Off”); comradeship and harrowing battle (“Exposure” and “Spring Offensive”); the living hell of physical and psychological wounds (“Disabled” and “Mental Cases”); death, ghosts, and descents into the underworld (“Miners”, “Strange Meeting”). Such themes continued to resonate in the wake of 1939-45 and in the turbulent decade of the 1960s. Owen’s reputation grew exponentially after his poems were incorporated by Benjamin Britten (1913-1976) into War Requiem (1962), composed to consecrate the new Coventry Cathedral, one of the symbols of the destruction caused by Second World War bombing raids. His literary achievement was reinforced by the publication of the Collected Letters (edited by Harold Owen (1897-1971) and John Bell,1967), the Complete Poems and Fragments (edited by Jon Stallworthy, 1983/2013), three major biographies (Stallworthy, 1974/2013; Hibberd, 2009; Cuthbertson 2013), and numerous critical studies. His work, which has been part of the school curriculum in Britain since the 1960s has also inspired novels, plays, and popular songs and continues be a touchstone for commentators and poets reflecting on conflict in the 21st century. 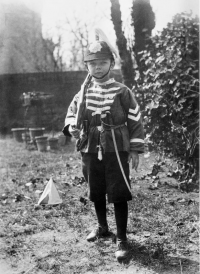 Wilfred Owen as a child