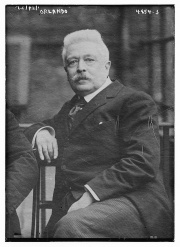 A renowned jurist with lasting influence, Vittorio Emanuele Orlando served as justice and interior minister between 1916 and 1917, implementing liberal policies despite strong opposition. As prime minister after the Caporetto crisis he rallied Italy, instituted social reforms, reorganized the army, protected civil rights, preserved civilian control of the military, and led the country to victory.

Born to a family of prominent lawyers, Vittorio Emanuele Orlando (1860-1952) studied law at the University of Palermo. By 1882, he had become Italy’s youngest professor of constitutional law, published highly-regarded works on jurisprudence, and directed a prestigious journal of public law. Orlando became Italy’s most famous liberal jurist, whose writings influence the country to the present day. His juridical writings supported social legislation, judicial independence, electoral reform, the freedom to strike, and the neutrality of the state in the struggle between capital and labor.

Orlando was elected to parliament in 1897 from the Sicilian district of Partinico, though he lived in Rome. He came to the attention of liberal statesman Giovanni Giolitti (1842-1928), who dominated Italian politics between 1901 and the First World War. Orlando served in Giolitti’s cabinets as minister of education (1903-1905) and justice (1907-1909), supporting liberal legislation, reconciliation with the church, and civil rights.

Orlando and the First World War↑

Italy declared its neutrality when the First World War began in 1914. Orlando supported the policy but later embraced interventionism. He was asked by Antonio Salandra (1853-1931), who replaced the neutralist Giolitti as prime minister on 21 March 1914, to become minister of justice for a second time. He was tasked with preparing the legislation necessary to govern Italy during wartime. The new laws allowed the state to invoke extraordinary powers, but Orlando pledged to protect civil rights during the conflict.

During Italian neutrality (2 August 1914-23 May 1915), debates between neutralists and interventionists shook the country. After intervention, supporters of the war effort demanded government repression of antiwar activists, especially socialists and Catholics. Italian Catholics had opposed intervention and later accepted the war, but came under attack because of Pope Benedict XV’s (1854-1922) activities in favor of peace. Orlando allowed antiwar activists to conduct their activities and protected the church’s independence under the Law of Guarantees adopted on 13 May 1871.

The military commanders reacted strongly against Orlando’s policies. In May 1916, an Austrian offensive produced a request from army chief Luigi Cadorna (1850-1928) for more troops. A dispute ensued over the question of civilian control of the military, causing Salandra’s fall and bringing the more pliable Paolo Boselli (1838-1932) to power on 18 June at the head of a “national unity” cabinet representing a coalition of major political factions. Orlando participated as minster of the interior and the representative of the “Left Liberals”. He continued his policies of protecting church independence and opposing attempts to suppress freedom of speech, press, and association, which made him a prime target of nationalists and the army, who believed that these freedoms damaged the war effort.

In spring 1917, the Austrians took 6,500 prisoners in a military counteroffensive. Cadorna blamed Orlando and the antiwar activities in Orlando’s native Sicily, and claimed that Sicilians had been involved in draft-dodging. He tightened disciplinary measures in the army and demanded immediate government action to suppress domestic subversives. Orlando charged War Minister Gaetano Giardino (1864-1935) with threatening to occupy the interior minister’s office, and rumors of a military coup were rife. At a cabinet meeting on 28 September 1917, Orlando responded by denouncing Cadorna’s allegations and forcing him to back down.

On 24 October 1917, an Austro-German offensive at Caporetto produced major Italian losses, but resistance on the Piave thwarted the enemy objective of knocking the country out of the war. The defeat damaged Italy’s military reputation and forced Boselli’s resignation and replacement by Orlando, who secured a pledge from the king to fire Cadorna and rallied the country to resist the enemy.

Orlando’s liberal policies won him support from Catholics and the most influential socialist leaders. He increased popular support for the military effort while opposing demands for repression. Orlando addressed the grievances of the country’s different social groups. For example, he increased the number of military exemptions for peasants in response to criticism by southern peasants who resented serving disproportionately in the armed forces as compared to northern industrial workers. His government pledged land reform after the conflict ended and established a new National Veterans’ Organization and a fund to buy up land for allocation to returning war veterans.

Government measures also improved soldiers’ morale and stimulated their will to fight. A new commander, Armando Diaz (1861-1928), softened Cadorna’s harsh discipline and adopted modern military techniques. Orlando’s cabinet established the Ministry for Military Assistance and War Pensions, which provided soldiers with life insurance policies. It published periodicals explaining the goals for which the soldiers fought and added ten days extra leave to the existing fifteen. Under Orlando’s leadership, the country and the army recovered from the Caporetto defeat and went on the offensive. At the Battle of Vittorio Veneto (24 October-3 November 1918) the Italians routed the Austrian forces and ended the war on the Italian Front a full week before the armistice on the Western Front.

Orlando After the War↑

Orlando led the Italian delegation to the Paris Peace Conference. The disputes between Italy and the Allies and the notion of a “mutilated victory” have been much discussed. Unfortunately, the historiography on this question has been stuck in a “default” posture about how Italy fought and supposedly asked too much in return for the effort it made to defeat the Central Powers. Unlike usual historiographical debates, this one is characterized more by silence than noise, with scant attention focused on the conference’s effects as a cause for the rise of fascism, as historians have tended to ignore the impact of the conference on the Italian postwar crisis.

Orlando’s government fell on 23 June 1919. Benito Mussolini (1883-1945) came to power in 1922. He smothered Orlando’s liberal legacy, which resurfaced with the establishment of the Italian Republic in 1946. As a member of the constituent assembly, Orlando emphasized Italy’s pre-fascist liberal and democratic traditions, seeking to embed them in the new republican constitution’s legal and political structures. He believed that Italy had moved into a new revolutionary era characterized by mass politics and modern constitutions. At age eighty-seven, he fully accepted these changes.