Ugo Ojetti was a journalist who, during the war, was tasked with the protection of monuments and artworks in the Italian-occupied territories. He was also instrumental in establishing and managing Italy’s wartime propaganda regime.

A graduate of law, Ugo Ojetti (1871-1946) worked as a journalist in Italy from the late 19th century, and began writing for the Milan-based newspaper Corriere della Sera in 1898. By 1914, Ojetti had become one of the most important conservative art critics in Italy. He was a promoter of the Italian artistic tradition and sought to defend Italy’s architectural heritage against modern interventions. From 1905, he was a member of the Commissione centrale per i monumenti e per le opere di antichità ed arte, which was concerned with the protection of Italy’s artistic heritage. When war broke out in Europe in summer 1914, Ojetti was an early and fervent supporter of Italian intervention alongside the Allies. Between September 1914 and April 1915, he wrote a regular pro-interventionism column for Corriere della Sera, called "Esami di coscienza".

Ojetti enrolled as a volunteer in the Italian army in May 1915. During the war, he was involved principally in the protection of monuments and artworks, as well as the establishment of a propaganda system in Italy, occupying prominent roles in each of these areas. Ojetti was sent to Venice in May 1915 as a second lieutenant with the engineers corps, tasked with overseeing the protection of buildings and monuments in situ and the removal of works of art to safer locations, such as Florence. Shortly afterwards, in July 1915, he was transferred to the Office of Civil Affairs at the High Command in Udine to oversee the protection of artworks and monuments in the occupied territories. He continued this work for the remainder of the war. In November 1918, he joined the commission of inquiry into rights violations committed by the enemy.

Ojetti was one of the earliest advocates for an Italian propaganda division, highlighting this as a necessity from November 1915 onwards. In January 1916, due to his journalistic experience, he was given the task of combating the false and exaggerated rumours that soldiers and officers on leave were spreading among civilians about the progress and outcome of the war, via the press. Ojetti believed in using modern, visual forms of communication for propaganda purposes, as they were most effective in reaching large sections of the public. He proposed that film operators should be sent to the front to record documentary war footage, which could then be distributed in Italy and among Italy’s allies. He also recommended the establishment of a Photography Division to capture military conditions and portraits of potential heroes. He declared in a letter to his wife, dated 1 March 1916, that responsibility for all of Italy’s domestic and foreign propaganda rested with him. He would continue in this role until the formal establishment of the Servizio P (Propaganda Service) in early 1918, at which point he was put in charge of managing Italian propaganda directed towards ethnic minority groups in the Austro-Hungarian Empire.

In 1920, he founded the magazine Dedalo, which he edited until 1933. He also founded and edited the literary and artistic journals Pègaso (1929-1933) and Pan (1933-1935). He continued to collaborate with Corriere della Sera and was its editor between 1925 and 1927. He was one of the signatories of the "Manifesto degli intellettuali fascisti" (Manifesto of the Facist Intellectuals) in 1925 and was inducted into the Accademia d’Italia in 1930. 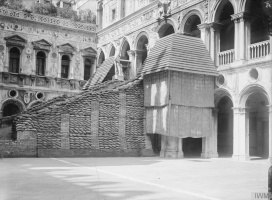 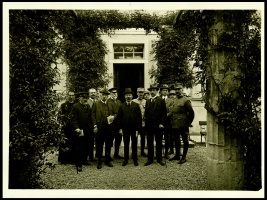 French parlamentarians and Ugo Ojetti at the museum of Aquileia