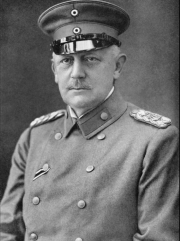 Helmuth Johannes Ludwig von Moltke (1848-1916) started his military career in 1869 and took part in the Franco-Prussian War between 1870-71. From 1891 on, he was aide-de-camp of Wilhelm II, German Emperor (1859-1941). He succeeded Count Alfred von Schlieffen (1833-1913) as Chief of the General Staff of the army in Berlin in early January 1906, upon the wish of the Kaiser. Moltke took over Schlieffen's idea of conducting a rapid campaign against France in order to avoid a long two-front war against Germany's old rival in the west and its ally in the east, Russia. The General Staff of the army based its plans on force strengths that in some cases existed only on paper. In the crisis-ridden years before 1914, Moltke made a great effort to achieve a massive increase in the strength of the army, but was only partially successful in asserting his will at the war ministry. At the same time, he repeatedly advocated a preventive war when he spoke to the imperial government. The increased fear of a British blockade, the "Russian steamroller" in the east and a possible French offensive in Lorraine, prompted Moltke to change important details of the Schlieffen Plan. For example, he reinforced the southern wing of the German western army and avoided the march through the neutral Netherlands in August 1914 in order to secure a logistic "windpipe" for the German Empire. Operationally, this required a surprise raid to be mounted on the Belgian fortress of Liège, a move that put the German operations under considerable time pressure and left no room for political solutions. In the east, a region which Schlieffen had largely neglected due to Russia's defeat against Japan in 1905, an army was to conduct an active defense.

The retreat at the Marne in September 1914 ended the illusion that Germany would achieve a quick victory. A key cause of the failure was the completely inadequate communication between Moltke, who was far away in the Supreme Headquarters, and his headstrong commanding generals at the front. The lack of army group headquarters as a crucial hierarchy level between Moltke and the seven armies was another key factor. Moltke had trusted his generals to be cooperative, but this was to no avail, and unlike Joseph Joffre (1852-1931), his great antagonist, he did not take sufficiently resolute action in the decisive phases of the campaign. The failure of the German attack at the Marne resulted in the ailing Moltke being replaced by War Minister Erich von Falkenhayn (1861-1922) on 14 September 1914. "Neutralized" as his deputy in Berlin, Moltke took an active part in the schemes of Paul von Hindenburg (1847-1934) and Erich Ludendorff (1865-1937) to remove his successor from office in the winter of 1914-1915. After his early death on 18 June 1916, supporters of the Schlieffen school made him the scapegoat for the allegedly "squandered victory" at the Marne and Germany’s later defeat.