In neutral Switzerland, the executive powers were strengthened more than in some belligerent countries. In a state of emergency, the military justice system played a crucial role; it not only acted as a central instrument for consolidating and promoting discipline but also served as a tool to back emergency legislation and intimidate the labour movement.

Until recently, the history of Swiss military justice in the First World War has been insufficiently researched. Exceptions were studies that dealt with partial aspects or particularly well known cases. The author's monograph on Swiss military justice and its role during the First World War was published in 2018 and shed some light on the topic, which was already heavily disputed during wartime. At the outbreak of the First World War, Switzerland had a relatively modern code of military criminal procedure dating back to 1889. A prominent feature was the fact that it allowed only minimal influence of the army leadership or military superiors on the course of military jurisdiction. Additionally, the rights of the defendants were comparatively well developed. It also did not include abbreviated or accelerated proceedings, even in a potential event of war. The composition of the military courts was designed to reflect the ideal of the Swiss system of compulsory military service whereby the judges had to be recruited from among the troops, half of whom had either to be soldiers or non-commissioned officers.

In contrast to the court-martial procedure, the military penal code of 1851 was in great need of reform. The penalty standards were characterised by their disproportionate severity, in particular, offences that occurred frequently carried high minimum penalties.

Expansion of the Military Justice System↑

On 1 August 1914, the federal parliament granted far-reaching and extraordinary financial and legislative powers to the federal council. It allowed the government to create new laws and to transfer the punishment of offences against these regulations to military courts. As the Swiss legal system was then organised on a regional and cantonal basis, the military justice system seemed to be the only authority that gave the government a certain control over emergency law. Therefore, not only were 220,000 soldiers now subject to military justice, but also the entire civilian population for an increasing and evolving range of offences.

Because the penal code of 1851 only knew the duality of peace and war, the federal council additionally decided that the provision for martial law should persist. Legally, this made it possible for the military courts to even impose death sentences, even when Switzerland was not directly involved in armed conflict.

It soon became apparent that the military justice system was not at all prepared for this development and the workload of the various divisional and territorial courts differed greatly. The courts had to deal with an unclear legal situation and had to decide in cases that were not related to the penal code. Military courts now also ruled on violations of export bans, food processing or press regulation violations which were committed by civilians. Due to a lack of legal practice, the various courts’ decisions lacked consistency, even across cases with similar circumstances. The severity of the military code also became apparent in the penalties against delinquent soldiers.

From 1915 onwards, the military justice system came under increasing pressure. The social democratic party successfully launched a popular initiative aimed at abolishing military justice. Some highly scandalised court-martial cases (e.g. the “Oberstenaffäre”) and the overload of the military courts led the federal council, in early 1916, to shift the boundary between military and civilian jurisdiction back towards the latter, ultimately leading to a number of offences being transferred to civilian courts.

Additional adjustments were also implemented to counterbalance the long duration of the mobilisation and the resulting deterioration of morale and discipline in the mobilised armed forces. The introduction of conditional pardons, the mitigation of the military penal code, and the implementation of alternative forms of punishment illustrate that prison sentences were no longer considered to be a sufficient instrument to maintain soldierly discipline. It resulted in a change in the paradigm of punishment – a shift from general prevention to forced labour and military education of delinquent soldiers.

Towards the end of the war, military justice began to play an increasing role in the mounting tensions between organised labour and the political and military leadership. After the general strike of 1918, numerous military trials involving the participants took place, due to their violation of government ordinances. Despite prison sentences being imposed on a number of participants, the military courts also showed the will of the government to contribute to the easing of political tensions after the end of the war by discontinuing many of the investigations. Here, military justice was clearly utilised as a political instrument.

Parallel to the emergency legislation itself, the military justice system remained active even after the demobilization of the army at the end of the war. Military courts continued to judge offences until 1921, including civilian offences.

Conduct of the Courts↑

At the beginning of the war, thirteen military tribunals were established and spread throughout the territory. With minimal changes, they remained in permanent service throughout the war and until 1921.

The social profile of the court personnel indicates that the idea of reflecting the militia structure of the army by placing ordinary soldiers in the tribunals was not implemented in practice. In 1917, for example, there was not a single soldier among the judges of the military tribunals.

Between 1914 and 1918, there were 12,789 trials, resulting in 7,479 convictions, 695 acquittals, 2,842 dismissals and 1,773 disciplinary punishments. The end of the war did not result in a reduction of military trials as most of the emergency laws remained in force. Therefore, this quantitative analysis must also include the years up to 1921 in order to provide an adequate picture. Accordingly, between 1 August 1914 and the end of 1921, there were 16,915 trials, which ended in 11,150 convictions, 902 acquittals, 2,850 dismissals and 2,013 disciplinary punishments. Although legally possible, death sentences were neither pronounced nor implemented.

Between 1914 and 1921, Swiss military courts sentenced 11,226 persons. Among them were 6,501 (58 percent) military personnel, 4,392 (39 percent) civilians as well as 333 (3 percent) foreign internees. These results highlight the civil significance of the military justice system during and in the first years after the war.

Due to the lack of historical sources, an analysis of the offence categories is only possible for 1915, 1916 and 1917. In these three years, military offences accounted for the majority of the trials (48 percent), followed by a relatively high proportion of common offences (34 percent) and offences against emergency decrees (18 percent). Various forms of military absence, desertion and disobedience were especially common.

In Switzerland, the beginning of the war resulted in an expansion of the military justice system. Military courts in Switzerland were not only responsible for maintaining soldierly discipline in the newly mobilized army, but also for an increasing spectrum of offences which affected the entire civilian population. This expansion was particularly delicate, because the military penal code only knew the duality of peace and war and martial law soon prevailed, although Switzerland was not directly involved in military operations. The acceleration of legislative processes through emergency legislation allowed the central state to use military justice flexibly as an instrument of power and control, which at times reached far into civil society and evolved over time. This flexibility can be seen as one of the unique characterizations of the Swiss military justice system. As the war dragged on and the army stayed mobilized, there were tendencies toward greater leniency and lessening penalties. Although obedience remained the norm, the quantitative data can be interpreted as a symptom of disciplinary and morale issues in the Swiss army during the First World War. 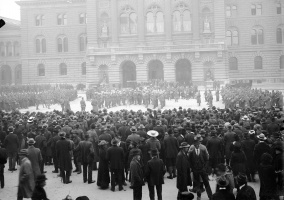 Music and troops at the Bundeshaus, 1918 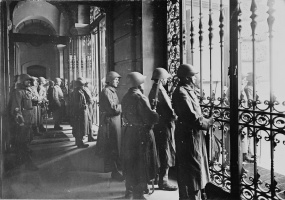 Guard detail in the federal parliament building in Bern