In 1915 the Italian government created an agency called Mobilitazione Industriale (Industrial Mobilisation) to manage economic activities and labour relations in wartime. The MI attempted to control social conflict through both repression and new forms of collaboration. Military law was implemented in the factories, while unskilled labour progressively replaced men called to the arms.

The outbreak of the war and, above all, its prolonged duration, led to insatiable demands for workforce and munitions. Special measures were taken particularly in the industrial sector, which were intended to increase the supply of armaments and other products to the armed forces. As a consequence, each nation mobilised and disciplined their labour force in order to avoid any interruption in production and to restrict any chance of disputes between workers and industrialists. In addition, the enlistment of thousands of men progressively entailed the employment of new categories of workers, such as unskilled men, women and children. With the purpose of taking control of these matters, governments had to assume more explicit roles in the administration of economic activities and the supervision of labour relations. The war had a major impact on the established role of the state in national economies.

This was no less true in Italy than the other belligerent countries. Following the examples of Britain, Germany, France and Austria-Hungary, the Italian government resolved to create a new institutional infrastructure to extend state control over economic activities. General Alfredo Dallolio (1853-1952), was appointed as Undersecretary for Weapons and Munitions (in 1917 this title was upgraded to Ministry). Dallolio was assigned to supervise the newly created government agency, Mobilitazione Industriale (MI), through the decree no. 993 of 26 June 1915. The MI consisted of a Central Committee, based in Rome, and of seven regional committees (increased to eleven in 1917). The MI was jointly run by civil servants (servicemen included), employers and unions’ representatives. It was also charged with the task of settling any possible dispute between the labour force and entrepreneurs through arbitration. By so doing, the government tried to respond to an assertive labour movement and a restless working class that had significantly contested Italy’s entry into the war.

According to MI’s regulations, all categories of workers were under the disciplinary surveillance enforced by servicemen. Workers were not allowed to strike, resign or change workplace without the authorization of the MI’s regional committee; otherwise, they would be equated to deserters. Punishments and salaries, however, differed according to the kind of service to which the various labour forces were subjected. Decree no. 1684 of 5 November 1916, tempered the criteria for the crime of desertion, but increased the number of possible offences under military law. Moreover, further regulations in 1917 accorded more discretionary powers to the MI’s regional Committees with regard to both compensation and supervision of the workforce.

During the war years the hours of labour were extended, and real wages markedly decreased. The deterioration of both employment terms and standard of living caused some dissatisfaction, which started spreading among workers in the wintertime 1916-1917. It was, however, in August 1917 that discontent, hunger and anti-war motifs provoked intense uprisings and strikes in Turin, which required the harsh intervention of police forces. Before that, other forms of dissent had also hindered the work in the manufacturing plants. With a view to oppose increasing unrest, the three cities of Genoa, Alessandria and Turin were declared war zones in autumn 1917 (Decree no. 1483 of 16 September 1917), as had already happened throughout most of northern Italy. Moreover, the government issued the decree no. 1561 of 4 October 1917 aimed at repressing “defeatism” through the introduction of severe punishments against those who would “dishearten public morale”. The Caporetto defeat in October emphasised concerns for suspected “internal enemies” who were fated to either arouse workers in the wake of the Russian revolution or call for peace. As a consequence of this political climate, the monitoring and repression of out-of-line opinions and behaviour in the manufacturing plants became even worse.

At the end of the conflict, the factories supervised by the MI amounted to 1,976 and employed approximately 903,000 workers. The female workforce was around 22 percent and minors represented 6.6 percent of the whole workforce, thus attesting the growing employment of unskilled workforce throughout the war. Also the role of the MI as mediator between employers and trade unions had been intensifying, given that the number of settled disputes increased in the last years of war. Structure and objectives of the MI had succeeded in controlling social conflict through both repression and new forms of collaboration. Even though this experience of state-controlled economy would continue to some extent during the Fascist period of rule, its concerted approach did not prevent popular dissent to emerge powerfully during the so-called biennio rosso (two red years) in 1919-1920. 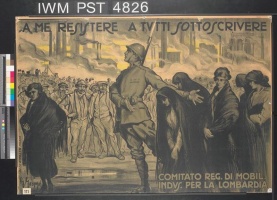 “A me Resistere A Tutti Sottoscrivere”, poster 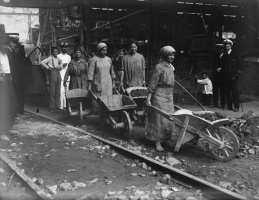