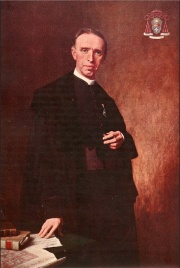 After his pastoral letter Patriotisme et endurance, which had a worldwide impact, the Cardinal Archbishop of Mechlin, Désiré Mercier, was seen both in Belgium and abroad as the incarnation of civil resistance to the German occupation of Belgium.

After his secondary studies (humanités) at the College Saint‑Rombaut of Malines (1863-1868), the young French-speaking Désiré Joseph Mercier (1851-1926) began his priestly career. He studied philosophy at the minor seminary of Malines (1868-1870) and theology at Maline’s major seminary (1870-1873), then left to complete his academic training at the University of Louvain. Ordained during his university studies on 4 April 1874, he subsequently returned to Malines in 1877, having earned a licence in theology. He was then placed in charge of teaching philosophy at the minor seminary and soon after was named spiritual director of the seminarians.

In 1882, after five years dedicated to philosophical studies and the religious training of future priests, the Belgian bishops designated Mercier to set up the Chair in Thomistic Philosophy that Pope Leo XIII (1810-1903) had requested be established at Louvain. Having succeeded in attracting some students of worth and bolstered by the success of his teaching, Mercier soon obtained the creation of a veritable Higher Institute of Philosophy. In only a few years, the institution had achieved international repute, professing an “open” Thomism.

Appointed Archbishop of Malines on 7 February 1906 and cardinal on 15 April 1907, Mercier proved to be an avant‑garde prelate in many domains. Before the war, he supported Christian democracy and Christian trade unions, encouraged the beginnings of the liturgical movement and Catholic Action, and intervened to attenuate excesses in the antimodernist repression striking progressive Catholic intellectuals.

Finally, after the war, he lent invaluable support to Joseph Cardijn (1882-1967), founder of the Christian Working Youth Organization (Jeunesse Ouvrière Chrétienne, JOC), and played a pioneering role in the area of ecumenism. Toward this goal he initiated the “Conversations of Malines”, an attempt at rapprochement with the Anglican Church. Due to his public stance against the Germans during World War One, the archbishop of Malines came to be identified as the soul of civil resistance.

For Mercier, action in the natural order was not only commanded by the religious repercussions of mixed questions, he considered that interest in “patriotic things” was a duty and a virtue in itself. What was fundamentally at stake here was the intuition – very modern – that a Catholic cannot ignore the affairs of the city and that he must do his part in building a more just world. He had already written his pastoral letter La Piété patriotique (Patriotic Piety) guided by this intuition in 1910 and continued on to courageously resist German occupation during World War I.

In December 1914, noting the first signs of discouragement among the population and the success of German propaganda in legitimizing the violation of Belgian neutrality and the abuses committed against the civil populations, Mercier published his celebrated pastoral letter Patriotisme et endurance (released beginning in early January 1915). The letter had an immense impact both in Belgium and abroad.

Engaged in a struggle against the invader and despite threats and external pressures against him – particularly from a Vatican that was very worried about the Catholic Church’s neutrality – the prelate maintained his intransigent policy to the end, at least in the public eye, for Mercier was actually convinced of the need for a negotiated peace and was willing to act discreetly to that end. Yet for over four years, serving as the veritable moral incarnation of occupied Belgium, Mercier never wavered in denouncing the occupying power’s abuses and publicly stimulating the civic ardour of his fellow-citizens. Whereas ordinarily Mercier could have been expected to be arrested, his high profile and his popularity among German Catholics ensured his continuing liberty, except for a short period in January 1915.

After the conflict’s end, the considerable prestige that Mercier enjoyed in the Allied countries was further reinforced by a two-month tour of the United States, where the triumphant welcome he received is all the more remarkable given the country’s Protestant majority. However, he sought in vain to exploit that influence in defending Catholic interests during the Treaty of Versailles negotiations, for example by obtaining a mandate in Palestine for Belgium or a solution to the Roman question.

Suffering from cancer, the Archbishop died in Brussels on 23 January 1926. The day before his death, when Charles Lindley Wood, Viscount Halifax (1839-1934) came to say goodbye, the cardinal in agony gave him his episcopal ring, a token of the reconciliation that was beginning.