André Mare was an artist close to the avant-garde movement and was called to service on 2 August 1914. He was involved in the first “camouflage” operations in official history, alongside hundreds of artists instructed to devise means to deceive the enemy. He detailed this remarkable endeavour in ten sketchbooks illustrated with figurative and cubist watercolours.

André Mare (1885-1932) was born in the small town of Argentan, in Normandy, France. He was already a well-known artist when he headed to the front as an artilleryman on 2 August 1914. Mare took his first artistic footsteps alongside his childhood friend Fernand Léger (1881-1955). Once in Paris, he became part of the avant-garde movement with the Groupe de Puteaux (the Duchamp brothers, Albert Gleizes (1881-1953), Jean Metzinger (1883-1956), Roger de La Fresnaye (1885-1925), Robert Delaunay (1885-1941), etc.). With friends, he presented the controversial Maison Cubiste (Cubist House) at the Salon d’Automne in 1912. It was through his work as a designer that he earned a living, however.

After having participated in the 1915 Champagne Offensive, Mare was among the first to join the remarkable “Camouflage” Unit adventure under the authority of the general staff: an increasingly large group of French artists, including painters, sculptors and set designers, soon assisted by some 80,000 workers who went about implementing their projects in dozens of workshops. For the first time in “official” history – in a war where everything was now visible from above –, it was necessary to create illusions, trompe-l’oeil creations, and invisible observatories, and to conceal military material and movement from the enemy. As a camoufleur, André Mare first worked on preparing the Somme Offensive (1916) alongside the British, whom he trained in these new techniques. He continued within the French army in the Oise and Somme departments before leaving in late 1917 to assist the Italian camoufleurs following the Battle of Caporetto. By the time he returned to the French lines in the spring of 1918, the war had changed: it had become a race in which material – and notably tanks – was increasingly important. The camoufleurs constantly changed workshops. Where they had previously designed camouflage based on fake trees and ruins, they now hastily devised kilometres of netting and rolls of coloured raffia destined to conceal the sites where regiments were implanted, often only for a day.

Throughout the war – in which he was wounded by shrapnel in March 1917 and exposed to mustard gas in 1918 – André Mare carefully detailed his experience through writing, photos, drawings and watercolours in ten small green sketchbooks which now provide exceptional insight into the course of the war – particularly since his account is further enhanced by letters from his wife Charlotte. In his notebooks, Mare described his work as a camoufleur in notes and sketches (notably the “false” observation-trees and “cubist” painting of rifles destined to dispel their shapes into the landscape), as well as his art, which asserted itself as increasingly sensitive and demanding. His watercolours were figurative at first, then became cubist, as though they were a means of introspection, a way to extract himself from the sinister images visible elsewhere in his photos. While prior to the war, cubism had represented a celebration of modernity, it appears to have become a language for Mare to convey the destructive power of modern war.

André Mare was present at the arrival of the German envoys sent to negotiate the Armistice in November 1918. The following year, he was commissioned to design the “Cenotaph” for the “Victory Celebrations”, a temporary monument to honour those who had died for their country. He founded the Compagnie des Arts Français with Louis Süe (1875-1968) and went on to pursue a brilliant career as a designer. Weakened by the war with lungs ravaged by mustard gas, he died young in 1932. 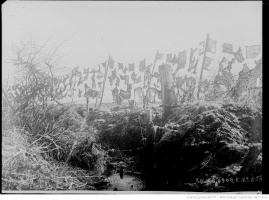 Camouflage for a piece of artillery 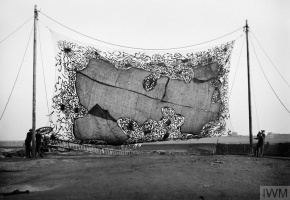 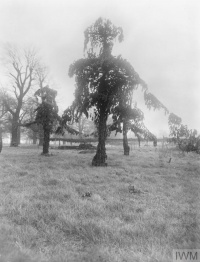 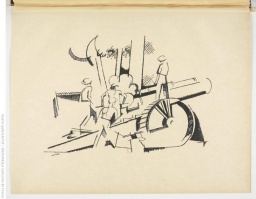 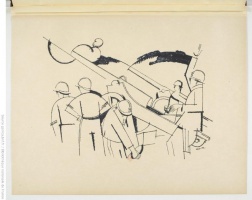