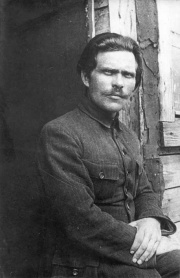 Nestor Makhno was a commander of peasant insurgents who fought the Bolsheviks, Whites and Ukrainian nationalists in the South East of present-day Ukraine. His espousal of anarchism has won him supporters among many Western anarchists, but some historians have questioned how far he should be understood as an anarchist leader.

Nestor Makhno (1889-1934) was the youngest son of a poor peasant family in Hulai-Pole. Following his father's death, he worked in a factory. In 1905, he joined a group called the "Peasant Group of Anarcho-Communists", which committed a number of robberies. He was arrested three times for his revolutionary and criminal activities. The last arrest in 1910 led to his imprisonment. He only escaped the death penalty because of his age. In prison, Makhno met the anarchist Petr A. Arshinov (1887-1938) and devoted himself to reading leftist writings.

Head of the Hulai-Pole Soviet↑

The February Revolution in 1917 freed Makhno from prison. He returned to Hulai-Pole, where he murdered the three informants whose testimony had put him in prison. With the support of his old acquaintances he became the chairman of the local peasant union, which in August 1917 became the Hulai-Pole soviet. In this position, he oversaw the redistribution of land once owned by landowners, Mennonites, and prosperous peasants (kulaks). He sided with the Bolsheviks in their war with the Ukrainian nationalist Central Rada at the end of 1917. In April 1918, the Central Powers, which had entered Ukraine to support the Rada in this conflict, reached Hulai-Pole. Makhno had to flee to Russia, where he met Vladimir Lenin (1870-1924). Their discussion revealed the ideological differences between them. Nevertheless, the Bolsheviks were happy to facilitate Makhno's return to Ukraine to foment a revolt against the German puppet ruler Hetman Pavel P. Skoropadsky (1873-1945).

The Revolt against Hetman Skoropads'ky↑

In July 1918, Makhno returned to Hulai-Pole and formed a small band that attacked and robbed landowners' estates. Pursued and surrounded by punitive units of the Central Powers, Makhno allied with the leader of another band, Fedor Iu. Shus' (1893-1921). Together they inflicted a resounding defeat on Austro-Hungarian forces near the village of Dibrivka in October. The munitions Makhno captured from them allowed him to arm more peasant insurgents. This marked the beginning of Makhno's insurgent army. He successfully conducted an irregular campaign against the occupiers that reinforced his authority among the local peasants and brought him more supplies. As the Central Powers began withdrawing from Ukraine in November, Makhno extended his power into the vacuum they left and clashed with the Ukrainian nationalist government that had replaced Skoropadsky. He allied with the Bolsheviks and, in February 1919, his troops officially became part of the Red Army.

The Highpoint of the Makhnovshchina↑

Makhno received arms from the Bolsheviks, enabling him to expand his forces considerably, by some accounts from 400 fighters in January 1919 to 20,000 by April. Makhno also created a rudimentary central staff. In the first half of 1919, he extended his power around the region east and south of Ekaterinoslav. Despite the formal subordination to the Red Army, Makhno retained his military and political independence. He organised political meetings at which delegates attacked the Bolsheviks' party dictatorship, the excesses of the first Soviet security organization (Cheka) and Moscow's agricultural policies. He cooperated with anarchists of the Nabat group (including Arshinov) and published the Russian-language newspaper Put' k svobode (The Path to Freedom). When the warlord Nikolai A. Grigor'ev (1885-1919) rose against the Bolsheviks in May, Makhno condemned Grigor'ev's nationalism and refused to support him, but also claimed that the failures of Bolshevik policy had created the conditions for the revolt.

Following the suppression of Grigor'ev’s main force at the end of May, the Bolsheviks turned against Makhno in an attempt to remove another troublemaker. This was poor timing for the Bolsheviks, as it coincided with Anton I. Denikin's (1872-1947) offensive in Ukraine. Makhno conducted an irregular campaign in the Bolshevik's rear. Then, during a meeting with Grigor'ev on combining their forces, Makhno's followers shot Grigor'ev in order to take over his units. At the end of summer, facing enemies from all sides - Denikin, the Bolsheviks and Ukrainian nationalists - Makhno was forced to move his troops outside of his traditional areas of support. In autumn 1919, the Bolsheviks started pushing back the Volunteer Army, and Makhno returned to Hulai-Pole as their ally. Makhno's power now reached its height, the most generous estimates putting his forces at 80,000. The Makhnovites declared a programme based on free soviets, the redistribution of land to peasants without compensation, and the free exchange of goods between the village and the city.

The End of the Makhnovshchina↑

In January 1920, the Bolsheviks again turned against Makhno, whose army had been weakened by typhus. Makhno fought an irregular war against the Bolsheviks until October 1920, when he and the Bolsheviks made peace with one another in order to defeat the White General Petr N. Vrangel (1878-1928). A month later, with the Whites defeated, the Bolsheviks decided finally to crush Makhno. The Red Army pursued Makhno for half a year across Ukraine. In August 1921, Makhno crossed with his last detachment into Romania, where it was disarmed.

Makhno spent his first years in exile in Romania (until April 1922) and Poland (until January 1924). He was an unwelcome guest in both countries - the Polish government even tried to convict him for revolutionary agitation. Following his time in Poland, Makhno moved to Danzig and then to Paris. He lived in poverty until he died of tuberculosis in 1934. While in exile, Makhno wrote numerous accounts of his activities during the Civil War and took part in the discussions among other émigré anarchists. He defended himself against the charge that his movement was not genuinely anarchist and espoused an anarchism of the deed over ideological and theoretical discussions. His émigré writings also showed an interest in Ukrainian identity that he had not displayed during the Civil War. These debates led to his isolation within the émigré community.

Characterising Makhno and the Makhnovshchina↑

Despite these controversies, Nestor Makhno has long held the affections of many Western anarchists who praise him as an emancipatory alternative to Bolshevik communism and one of the first figures to implement anarchist ideology. Historians, however, have discussed whether one should understand him as an anarchist, a peasant leader, or an apolitical man of violence. All three characterisations are partially applicable, but none is entirely sufficient. The shared experience of violence held together Makhno's bands, and his military organisation had little in common with traditional anarchist principles. However, violence alone cannot explain his relative success. Makhno also mobilised support by using anarchist slogans, which largely coincided with the traditional peasant desire for land and local power. At the same time, Makhno did not inspire a peasant movement, but rather latched onto one that already existed. Tensions emerged when circumstances forced Makhno to requisition peasant produce and conscript their sons.

A second question relates to the violence perpetrated by Makhno's supporters against Jews and Mennonites. Like most warring parties in the Ukraine, his troops committed pogroms. Anarchists have argued that he punished those responsible, but there were also apparently cases where he protected commanders who had instigated pogroms from Bolshevik reprisals. Makhno had a Manichean moral worldview divided between rich and poor. Violence against the former was often acceptable, but the criteria determining which group one belonged to could be arbitrary.