Lys, Battle of the

What the Portuguese call the Battle of the Lys represented merely the start of Operation Georgette, the second of Erich Ludendorff's (1865-1937) 1918 Spring Offensives. For the Portuguese, this battle – the costliest engagement of the First World War – lasted a single morning, and 9 April 1918 became the central date of their commemoration activities.

On 9 April 1918 the Portuguese Expeditionary Corps (Corpo Expedicionário Português, CEP) was about to enter a new, and as yet undefined, phase of its existence. Some days earlier, two brigades had been sent to the rear to rest; the remaining four brigades and the artillery corps, making up the Portuguese 2nd Division, had stayed behind. On the afternoon of 8 April 1918, however, an order arrived from General Richard Haking (1862–1945) of XI (British) Corps, stating that the 2nd Division’s infantry should also withdraw to the rear for a prolonged period of rest. Having spent the night packing, officers and men were then surprised by the German onslaught which followed. What began as a withdrawal turned into a rout. In the wake of the battle, and amid conflicting accounts of what had happened, the British High Command decided to prevent the reconstitution of the CEP as a frontline fighting force. Portuguese casualties were high, but only – in First World War terms – when it comes to prisoners taken.

The Eve of Battle↑

The March 1918 offensive having come to a halt, the German High Command decided to strike a second blow further north, aimed squarely at the British sector. The German Sixth Army was concentrated on a relatively narrow front, poised to strike against XI Corps (whose line was held by the British 55th Division and the Portuguese 2nd) and the 40th Division, to the north. The initial objective was to reach and cross the Lawe and Lys rivers.

There is some controversy over the extent to which the British High Command knew that the German offensive would begin on 9 April 1918, and over whether or not it failed to pass on that information to the Portuguese. The more traditional explanation is that in the face of a coming offensive, Haking engaged in a race against time to replace the Portuguese and that he narrowly missed his goal, in part because many of the reserve units at his disposal had only recently arrived from the March 1918 battle, in the hope of resting in a quiet sector. What is undoubtedly the case, however, is that the 2nd Division was now covering with three brigades what the CEP as a whole had previously covered with four, and that its battalions were heavily depleted after months without reinforcements. Moreover, there was a great deal of confusion over what its actual mission was. Whereas the First Army, under General Henry Horne (1861–1929), had favoured a “defence-in-depth” approach, which the CEP had internalized since its arrival in France, Haking, after his return from Italy, where he had been sent in the wake of the Caporetto disaster, began to insist on holding a main line of defence at all costs, informing the commander of the Portuguese division, General Manuel de Oliveira Gomes da Costa (1863–1929), and his subordinates, of this new approach. The extent to which the change to the battle plan was understood by the Portuguese is open to question; Gomes da Costa would continue to insist, for years to come, that the CEP had been asked to defend too many lines with its enfeebled battalions.

The Course of the Battle↑

At about 4:15 AM on 9 April 1918, the German artillery unleashed a mixed barrage of explosive and gas shells whose intensity the Portuguese had never experienced before. Command points, artillery positions and communication trenches were singled out for special attention. Gas mixed with the existing fog to blind the CEP; communication between its constituent parts was soon lost. Almost immediately the battle became one in which small and isolated groups of men were asked to fight on without orders or any conception of what was happening around them. The situation on the frontlines was confused, and soon after the battle accusations began to fly between Portuguese and British about who had given way first at the points of contact between the 2nd Division and its neighbouring formations, allowing German forces to surround and mop up Allied soldiers. In reality, though, the new infiltration tactics used by the Germans were probably responsible. Even while the barrage was taking place, German Stoßtruppen were already at work in the British and Portuguese trenches, sowing chaos.

Although some Portuguese units on the frontlines seem to have held out, suffering heavy casualties, most simply gave way, rushing back to the safety of the Lawe and Lys rivers. On their way to the rear they encountered, and often demoralized, the men of the reserve brigade, who were moving towards their allotted position in preparation for a counterattack that never materialized. The CEP’s increasingly disorderly retreat, combined with the ineffectual action of its reserve brigade, turned the Portuguese into a ready-made scapegoat for the La Lys debacle. Portuguese commentators concentrated their attention on the few instances of resistance (notably the fortified village of La Couture) and identified some heroic individuals, starting with soldier Aníbal Milhais (1895–1970), a light machine-gunner who carried out a successful one-man campaign against the advancing Germans. British commentators produced a very different – and often scathing – account of what had happened to their “ancient ally”. While mortal casualties among the Portuguese were counted in the low hundreds, the numbers taken prisoners surpassed 6,000.

La Lys and the Memory of War↑

The battle waged on 9 April 1918 constitutes the central event of the CEP’s history even if the full details of the encounter were not generally understood at home. The battle was presented – and is generally remembered – as an epic encounter against impossible odds. The army’s suffering on that day would then be used as justification for its increasing role in Portuguese politics, culminating in the 28 May 1926 coup which ended the First Republic. Although the Portuguese henceforth celebrated 11 November along with other allied nations, it was 9 April that took pride of place in their remembrance ceremonies. 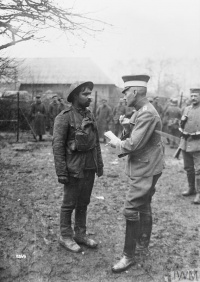 Portuguese POW after Battle of the Lys