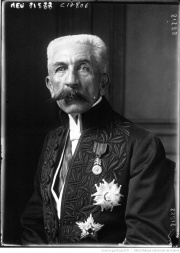 During World War One, Hubert Lyautey was the French Resident-General in Morocco and became Minister of the French War Department in 1916.

A cavalry officer in the colonies↑

Louis Hubert Gonzalve Lyautey (1854-1934) came from a wealthy family. Initially, he worked as a French officer and then served in the cavalry. After writing an article on the social role of the officer in 1891, he was treated with some hostility in the military, so he decided to go to the French colonies. He went to Tonkin (French Indochina) to serve under the command of General Joseph-Simon Gallieni (1849-1916), eventually following him to Madagascar. In 1900, Lyautey asserted his own intentions to pursue colonial leadership with an article entitled "The Colonial Role of the Army". In this text he advocated that individuals should change their military careers and become colonial administrators. In 1907, Lyautey was promoted to the position of Divisional General, and in 1912 he was appointed Resident-General in Morocco.

The war in Morocco↑

At the beginning of the First World War in 1914, Lyautey had to send approximately 80,000 men to the front. Nonetheless, with on-the-ground support from several military leaders including Paul Henrys (1862-1943), Henri Gouraud (1867-1946) and Jean-Marie Brulard (1856-1923), Lyautey was able to remain in Morocco. He sent 35,000 men to France and kept the rest, including indigenous and territorial troops and the French Legion, to fight against the German presence. His strategy was “to show strength in order to avoid having to use it.”[1] He decided to fight against German propaganda through a "policy of smiles", that is to say, to show an absolute recklessness in all circumstances. Lyautey’s primary goal was to avoid offending Islam, and his secondary goal was to support business development in order to actively participate in the war effort. His economic battle became more efficient after 1916 through the establishment of several Economic Studies Committees that were set up in major cities. However, around this time, he was replaced as Resident-General by Gouraud, when Lyautey was summoned to Paris.

Summoned by Aristide Briand (1862-1932) on 12 December 1916, Lyautey took office as the Minister of War in early 1917. He did not remain in this position for very long, because he did not support the encroachments of civil power. On 14 March 1917, an inquiry into aviation practices caused an incident in the Chamber of Deputies, leading to Lyautey’s resignation on the same day.

Lyautey returned to Morocco in May 1917 to continue the fight against Germany. As he has been aptly described by Daniel Rivet, he then became more than ever the "colonial lord" of Morocco, a position he held until 1925.