Situated above the Austro-Hungarian naval base in the Bay of Kotor, Mount Lovćen was extremely important for both the Central Powers and the Entente. The mountain was a symbol of Montenegrin statehood and national identity. Austro-Hungarian forces conquered it in January 1916.

Mount Lovćen (42°23'56"N, 18°49'5"E) is part of the Dinaric Alps, situated in Montenegro between the Bay of Kotor (Bocche di Cattaro) and the Southern Adriatic Sea. The eye-catching karst massif, with its steep and rocky slopes, has two peaks: Štirovnik (1,749 metres) und Jezerski Vrh (1,657 metres).

Since 1854, the Habsburg Empire had maintained a naval base in the deeply indented Bay of Kotor at the foot of the Lovćen – one of the best natural harbours in the world. But Kotor’s strategic value was diminished, if not neutralized, by the Montenegrin outposts on the Lovćen, ideally suited to observing and threatening the Austro-Hungarian naval facilities.

After several months without significant combat operations in the region, the Lovćen again became the centre of the military operations: After Austria-Hungary, Bulgaria and Germany had defeated Serbia at the end of 1915, the Austro-Hungarian army attacked Montenegro. Between 7 and 10 January 1916, the 47thInfanteriedivision, closely backed by naval artillery, conquered the Montenegrin positions at the Lovćen, which the Lovćenski Odred had defended. The fall of Lovćen demoralized the Montenegrin forces; a counteroffensive failed due to insubordination and mutinies. The Montenegrin army requested an armistice, but the Austria-Hungarian forces continued their offensive and seized Montenegro’s capital, Cetinje, on 13 January 1916.

The elimination of enemy positions on the Lovćen allowed the Central Powers to maximize use of the Bay of Kotor. The bay became the main base for the Austro-Hungarian cruiser flotilla; Austro-Hungarian and German submarine facilities were expanded. During the three years of the Austro-Hungarian occupation, Mount Lovćen was arguably the best guarded location in Montenegro.

The annexation of Mount Lovćen was a central war aim of Austria-Hungary. Charles I, Emperor of Austria (1887-1922) even included it in his “minimal programme” of 12 January 1917, along with the guarantee of the Habsburg Empire’s territorial integrity and a dynastic change in Serbia.

In 1851, Peter II, Prince-Bishop of Montenegro (1813-1851) – called Njegoš – was buried in a small chapel on Jezerski Vrh. As a politician, Njegoš was considered the founder of the modern Montenegrin state, but first and foremost he was revered as one of the most prominent Serb poets and author of the Montenegrin national epic "The Mountain Wreath" ("Gorski Vijenac"), in which the Lovćen plays a central role.

The Austro-Hungarian plans to fortify Mount Lovćen in order to protect the Bay of Kotor endangered Njegoš’s burial chapel. Thus, on 12 August 1916, Njegoš’s corpse was solemnly – under supervision of the Orthodox clergy – transferred to the monastery in Cetinje without much further ado. The Austro-Hungarians additionally hoped that Serb pilgrims would cease to visit the Lovćen. Njegoš’s remains were returned to the Jezerski Vrh in 1925. In 1970, they were buried in a monumental mausoleum designed by Ivan Meštrović (1883-1962).

The Austro-Hungarian generals Ludwig Koennen-Horák von Höhenkampf (1861-1938) and Stjepan Sarkotić von Lovćen (1858-1939) received their noble names in recognition of their merits during the capture of Mount Lovćen in January 1916. During the Yugoslav era, the Bay of Kotor remained an important military port. After Montenegro’s independence in 2006, the military installations were dismantled. 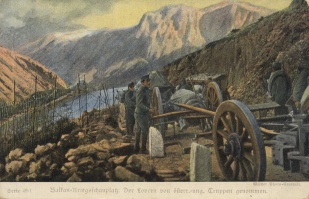 Austro-Hungarian forces on the Lovćen, 1916 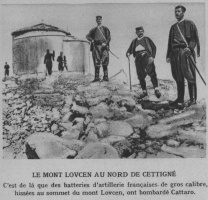