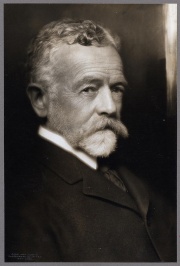 Henry Cabot Lodge was a Republican senator from Massachusetts. Close friend to Theodore Roosevelt, Lodge supported imperialist endeavors and favored military preparedness following the outbreak of World War I. As chairman of the Senate Foreign Relations Committee, Lodge opposed President Woodrow Wilson over ratification of the Treaty of Versailles.

Henry Cabot Lodge (1850-1924) was born into a prominent Boston family in 1850. Through his mother’s family, the Cabots, Lodge traced his lineage back to the 17th century, with one great-grandfather a leading Federalist during the Revolutionary period. Growing up in both an intellectual and privileged household, "Cabot" took naturally to academic subjects, particularly history and literature. Beyond his early devotion to scholarly pursuits, Lodge also enjoyed numerous sports and the great outdoors; activities that would later help foster a friendship with Theodore Roosevelt (1858-1919).

As was customary among upper-class New England families, Lodge attended Harvard College, graduating in 1871. After marrying Anna Davis (1850-1915), daughter of naval scientist and Naval Observatory superintendent Rear Admiral Charles H. Davis (1807-1877), Lodge returned to Harvard. By 1876, at only twenty-six years old, Lodge had earned both law and doctoral degrees; his Ph.D. in Political Science was the first ever issued to a Harvard student. Over the next several years, Lodge – mentored by his former teacher Henry Adams (1838-1918), grandson and great-grandson of two former presidents – worked as assistant editor of the respected intellectual quarterly North American Review and taught American history at his alma mater, publishing several books while on the faculty.

From Professor to Politician↑

Given his intellectual and familial background, it is no surprise that Lodge turned his attention to politics. Briefly joining with Independents, Lodge ultimately found a political home within the Republican Party. His first years in politics included membership in the lower house of the Massachusetts legislature. Serving in the secretary of the state’s delegation to the Republican National Convention during the 1884 presidential contest initiated Lodge’s friendship with fellow Harvard graduate Theodore Roosevelt. In that election, both men remained true to the party when many deserted its ranks as a result of candidate James G. Blaine’s (1830-1893) connection to financial corruption. This decision fatefully impacted both Lodge and Roosevelt. Lodge’s loyalty bore fruition when he successfully won election first to the House of Representatives (1886) and then to the Senate (1892) Lodge remained in the Senate for the remainder of his life. For Roosevelt, his adherence to the Republican Party in 1884 served as a step towards the White House. In the years ahead, their partnership played an active role in shaping American foreign relations.

Almost immediately upon his ascension to the Senate in 1893, Lodge demonstrated his ability to navigate the waters of Congress, establishing himself as a dedicated and respected – though not always well-liked – spokesman for both his home state and the nation. Lodge’s particular passion centered on U.S. foreign policy and he began serving on the Senate Foreign Relations Committee in 1896. For Lodge, the timing was perfect, as his engrained sense of superiority coupled with a romanticized notion of American destiny made him a strong believer in imperialism. Lodge shared the beliefs of his friend Roosevelt and newly elected Republican president William McKinley (1843-1901). They understood the United States to have a special world mission and responsibility, due to the country’s technological and economic wealth. Lodge and his fellow imperialists emphasized the need for military preparedness. The senator spoke of the importance in maintaining a large and powerful navy, as well as development of military strategy policies regarding bases in the Pacific. Lodge’s fight for such measures proved significant, as the United States gained possession of numerous territories between 1898-1902 and experienced a growth in naval power under the presidency of Theodore Roosevelt.

The grand plans regarding America’s future, meticulously fostered by Lodge and Roosevelt, seemingly shattered in 1912 with the election of Democrat Woodrow Wilson (1856-1924). From the beginning, the Massachusetts senator had taken umbrage with the new president. He had defeated Roosevelt (who ran on the Progressive Party ticket) and the Republican candidate. Even worse, he appeared "soft" on U.S. military preparedness following the outbreak of the First World War in 1914. In advocating American involvement, Lodge condemned Germany as sole instigator of the war and called for the unconditional surrender of the Central Powers. American entry into the war in 1917 provided further ammunition for Lodge, as he openly criticized the President’s call for "peace without victory" and the Fourteen Points peace plan.

Lodge and the Treaty Ratification Fight↑

As chairman of the Senate Foreign Relations Committee, Lodge further challenged Wilson over the League of Nations and ratification of the Treaty of Versailles. A defender of imperialism, Lodge did not oppose an organization that would support peace with force. His primary contention lay with Article X of the league covenant, a provision Lodge believed had the potential to usurp Congress’ power to declare war. In his twelve reservations, Lodge reasserted American authority and control over its relations with other nations. This did not reflect all Republicans, despite Lodge’s unofficial position as Senate Majority Leader. Isolationists, in staunch opposition to the war since 1914, spoke adamantly against any league, with or without reservations. Men known as "irreconcilables" also refused compromise, rejecting the league outright. That Lodge capitalized on such divisions is a testament to his intellectual skill and political power.

Correctly understanding the political folly of outright Republican opposition to a peace treaty, Lodge created a scenario whereby Democrats would have to approve a treaty with Republican mandated reservations or reject it completely. In subsequent Congressional votes between 1919-1920, Lodge’s strategy achieved success; the Senate failed to ratify the Treaty of Versailles and Wilson’s Democrats received the blame, with the president and his party losing in overwhelming numbers in the election of 1920.

Even as he orchestrated the League’s defeat, Lodge believed strongly in America’s right to influence world affairs. Unfettered by "entangling alliances", the United States could move freely in asserting its economic and political interests abroad, uninhibited by the broken nations of Europe. Lodge’s continued importance in foreign affairs is reflected in his appointment by President Warren G. Harding (1865-1923) as a delegate to the Washington Naval Conference in 1922. The conference resulted in several arms reduction treaties while maintaining American national sovereignty and naval superiority.

Ironically, Lodge’s victory over Wilson marked the end of his command of the Senate. Narrowly winning re-election in 1922, the elder statesman remained in office until his death in 1924. 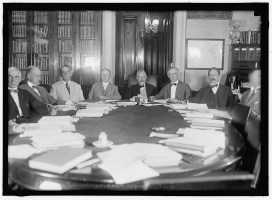