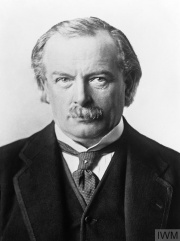 Career before World War I↑

David Lloyd George (1863-1945) enjoyed a meteoric political ascent before World War I. He grew up in rural North Wales in the household of his uncle, Richard Lloyd (1834-1917), a shoemaker. A small inheritance from his father, William George (1820-1864), allowed him to train as a solicitor and he became Liberal MP for his local constituency of Caernarvon Boroughs at the age of twenty-seven. Initially, he was a leading figure in Liberalism’s Radical wing, known for his hostility to the Church of England and great landowners; but after he gained office in 1905 in the new Liberal Government as President of the Board of Trade, and then as Chancellor of the Exchequer from 1908, it soon became apparent that Lloyd George was interested in combining this approach with extending social reform and progressive taxation. He formulated the increases in direct taxation in the controversial "People's Budget" of 1909 and major welfare reforms like the 1911 National Insurance Act. His Mansion House speech of 1911, in which he stated Britain's opposition to Germany's aspirations in Morocco, was a key turning-point in the Second Moroccan Crisis, and ensured that Germany knew Britain would oppose its actions in Morocco. By 1914 he was one of Britain’s best-known politicians.

Contrary to the expectations of many of his Radical followers, Lloyd George, who was initially very reluctant to support Britain entering the war, ultimately dramatically changed position to support the cabinet's decision and did not oppose Britain's entry into the conflict. Indeed, he soon used a number of public speeches to identify himself with the drive to mobilize national resources for victory. He consistently criticized those in the Liberal government who wished to conserve Britain's resources and fight as limited a war as possible; and he argued for a massive expansion of munitions production to supply the new volunteer army and Britain's allies. This enthusiasm for expanding the state's role can be linked to his promotion of social reform before World War I. After the Liberals formed a coalition government with the Conservatives and Labour in May 1915, Lloyd George created the new Ministry of Munitions and successfully inspired a huge increase in armaments production. He also increasingly associated himself with the demand for conscription to organize the country's manpower – a policy that offended many Radicals, but was finally introduced, following the first conscription bill in January 1916. Lloyd George's tenure of the War Office in 1916 was less successful, as he was unable to establish control over the leading British generals and presided over the unsuccessful Somme offensive of June 1916.

Lloyd George's frustration at the lack of progress towards military victory hardened into a determination to remove Herbert Henry Asquith (1852-1928), the Liberal leader and Prime Minister, who he saw as ineffective, from control of the war effort. He collaborated with Andrew Bonar Law (1858-1923), the Conservative leader, in demanding that a new war committee, without Asquith, should take the key decisions affecting the war. When Asquith refused to agree and resigned in December 1916, Lloyd George formed a new Cabinet, with the support of the Conservatives, Labour and whatever Liberals he could muster – though no Liberal members of Asquith’s Cabinet initially agreed to serve with him. This action gradually split the Liberal party in two over the period 1916-1918. Lloyd George, however, was more concerned with proving that his government was more effective than Asquith's: a new War Cabinet of five was given supreme control over war policy; and new ministries, including Shipping, Food Control and Labour were created (often headed by non-political figures). Whether this proved more effective than Asquith's methods is a subject of debate, and the move to more government co-ordination of the economy, e.g. through rationing, was often a response to immediate crises in manpower and food production in 1917-1918. Even as Prime Minister Lloyd George was unable to completely control the army leadership. He had a particularly difficult relationship with the British army commander-in-chief Sir Douglas Haig (1861-1928). He was later to claim that he disliked the strategy of concentrating on a breakthrough in the Western Front and he often promoted alternative actions in Italy and the Balkans; but he still accepted there was no alternative to the inconclusive Passchendaele offensive in 1917. Following its failure he was able to insist British resources should be conserved for a lengthy war – a strategy that was much-criticized during the German offensive in March 1918 and produced the most important challenge to Lloyd George’s authority, when, in the "Maurice debate", he was accused of misleading the Commons. However Lloyd George survived to preside over victory in November 1918.

Lloyd George won a crushing victory at the post-war general election in December 1918, in alliance with the Conservatives, and virtually eliminated his Liberal rivals. He played a central and controversial role at the Versailles Peace Conference in 1919, ensuring Germany was forced to accept clauses in the Versailles Treaty that laid the basis for the Allies' demands for reparations, but opposing drastic reductions of its territory. Lloyd George's disastrous post-war policy in Asia Minor – egging Greece on to invade the rump Ottoman Empire, led to the Greco-Turkish War and mass population disruption in the region. The 1922 Chanak Crisis, during which Canada did not support British Foreign Policy when British troops were threatened by the Turks at Chanak, badly damaged Lloyd George; his Conservative allies turned against him, ending his government. He resigned the same year. Lloyd George never held office again, though he was an innovative leader of the reunited Liberal party in 1926-1931. Just before his death he was created Earl Lloyd-George of Dwyfor. 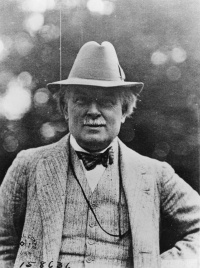