For many years it was considered that the First World War had nothing to do with Japanese literature. However, this article shows the war’s influence in two respects. First, World War I was consumed as a phenomenon in the Japanese media. Examples of this include the many war essays written by Natsume Soseki, and the popularity of Remarque. Second, East Asia was entering an age of war at that time, with Japan in particular preparing for the next world war, and Japanese literature should be considered in this context. Exemplary of this are Shimazaki Tōson’s account of his experiences in France and of disabled soldiers, and novels of the Russo-Japanese War which depicted the dispatch of troops to Siberia.

There has been little research on the First World War and its effect on Japanese literature until very recently. Before anything else, we have to take into account that the Japanese media went through massive changes at that time.

The circulation of magazines and newspapers increased dramatically, and the First World War was widely reported there. Erich Maria Remarque (1898-1970) also became a phenomenon in Japan. His novel All Quiet on the Western Front (1928) became a war drama and gained popularity in Japan.[1] The pageant movement that had taken place in the United States and Europe after the First World War was introduced to Japan by author Tsubouchi Shoyo (1859-1935).[2] All of this involved the media. In Japan, it was Natsume Soseki (1867-1916) who was most aware of the war in the media.[3] Soseki wrote about his media days in the essay The Inside of the Glass Door (Garasudo no uchi, 1915) and about the First World War in the essay Tentoroku (1916), a full-scale war theory that discusses militarism and individualism. Through the media, Japan consumed reports regarding the war “across the sea”. This was a tumultuous time for Japan when one considers the short period of time between the conclusion of the Russo-Japanese War (1904-1905) and Japanese participation in the First World War, as well as the rapidity with which a new round of aggression began between Japan and the United States of America in the Pacific. Therefore, while there is a tendency to think that the First World War had little to do with Japan, East Asia was in the midst of these wars which followed rapidly on from one another.

Japanese Authors in France during the First World War↑

At that time, many Japanese people were on the ground in Europe and writing of their experience. The Japanese author Shimazaki Tōson’s (1872-1943)[4] series called News from France (Furansu dayori, 1913-1915) is an example. Tōson moved to France in 1913. He also wrote a book against the backdrop of his stay in France called New Life (Shinsei, 1919) in which he described his well-known sexual relationship with his niece. After his arrival in France, the war broke out and a critical mood quickly emerged in Paris. After returning to Japan, he became a nationalist and completed the novel Before Dawn (Yoakemae, 1935). The socialist Komaki Ōmi (1894-1978)[5] had also been confronted with this war, which led him to write the book Other Countries’ Wars (Ikoku no sensō, 1930). Komaki returned to Japan right after the war and published the first issue of the magazine The Sower (Tane maku hito, 1921) and introduced the Third International[6] to Japan. In this way, the authors who encountered the First World War and wrote of their experiences began the ideological preparation for the next world war.

The Link Between War Theory and the Philosophy of Life↑

The First World War was depicted in the Japanese media in an abstract and indifferent way, but unlike during the First Sino-Japanese War (1894-1895) and the Russo-Japanese War, there was less acrimony, and therefore, the war was employed in a metaphorical sense in many war debates about the benefits of war generally. More importantly, at that time the philosophy of life and the war theory were linked. An important critic was Nakazawa Rinsen (1878-1920).[7] He introduced the philosophy of Henri-Louis Bergson (1859-1941)[8] to Japan. The term élan vital (fullness of life) was integrated into the language and used to talk about the world war through the lens of Bergson’s philosophy. In his article, Bergson’s View on War and Contemporary Civilization (Beruguson no sensō oyobi gendaibunmeikan, 1916), he presented the viewpoint of war as a vital phenomenon.

Next, attention should be given to the fact that World War I occurred during the aftermath of the Russo-Japanese War. Anti-military novels appeared which revealingly described inside information on the realities of the army. The famous Japanese naturalistic writer Tayama Katai (1872-1930)[9] experienced the Russo-Japanese War as the head of the unit of military cameramen. His famous long novel on a deserter, A Soldier Shot to Death (Ippeisotsu no jūsatsu, 1917), was based on this experience. During this period there were also many “disabled soldier novels” depicting the stories of injured soldiers after the Russo-Japanese War. Nakamura Seiko’s (1884-1974)[10] The Director of the Disabled Soldiers’ Home (Haihei inchō, 1916) and Kaneko Yōbun’s (1894-1985)[11] The Last Train that Picked Up Disabled Soldiers (Haihei wo noseta aka densha, 1922) are two examples. The grotesque portrayal of these soldiers is part of a collection of works which shook the peaceful image of the Taisho period.

The Siberian Expedition and Literature↑

In terms of the impact of the First World War, a problem that cannot be overlooked is the Siberian expedition.[12] This saw more than 70,000 Japanese soldiers dispatched; the scale of which can surely be called a “war”. As for the purpose of this expedition, this is still not clear. Miyazawa Kenji (1896-1933)[13] was a famous writer who created many fairytale novels. Amongst those works is one, The Crow and the Big Dipper (Karasu no hokuto shichisei, 1924), that calls to mind the First World War. It is a work depicting the decisive battle between a volunteer armada of crows and mountain crows. After burying the remains of his enemy, the prayer of the commanding officer of the birds goes as follows: “Soon there will be this world, where we don’t have to kill the enemy”. This statement is also repeated in, for example, The Night of the Milky Way Railroad (Ginga tetsudō no yoru, 1927). It would be fair to say that it is characteristic of Miyazawa Kenji’s recurring theme of self-sacrifice. This is a reflection of the Japanese spirit of war. Another example is Kuroshima Denji’s (1898-1943)[14] A Flock of Swirling Crows (Uzumakeru karasu nomure, 1928). It focuses on Japanese soldiers who had been stationed in Siberia for more than two years and were completely exhausted by garrison life. The superior dispatches the unit towards the defense of a partisan hideout. The unit gets lost in a snow field and one by one the members of the troop collapse on their way and die. This novel is a proletarian literary work depicting the last days of these miserable soldiers’ lives. The image of these wandering soldiers really resembles the image of the Siberian expedition.

Lastly, there was a perception that was widely present in literature of that time which centered on an oft-repeated idea, that – if a world war would happen again – the relationship between Japan and the US would be a criterion.

We will now turn to a discussion on the topic of accounts of future wars (science fiction) written during World War I, with Mizuno Hironori’s (1875-1945)[15] The Next War (Tsugi no issen, 1914) being a primary example. Mizuno was an officer in the navy. In 1916 he was determined to carry out military research about the First World War and applied for a two-year period of study abroad to visit the United States and European countries. He even visited the forts near Verdun and was an eyewitness to the realities of modern warfare. The Next War is a novel set in the Pacific depicting naval power. The conception of this novel is thought to come from Homer Lea’s (1876-1912)[16] novel The Valor of Ignorance (1909). What should be kept in mind is that these predictions about the future had a considerable influence on public opinion about the Japanese-American relationship. In this way, there is a concrete relationship between Japanese literature and the First World War. First, the world war was consumed as a phenomenon in the Japanese media. The concrete manifestation of this was the war theory and the popularity of Erich Maria Remarque. Second, East Asia was entering an age of wars and Japanese literature at that time should be considered in this context. Further to this, when considering the works of Mizuno Hironori it is certain that literature played a role in preparing for the next world war. 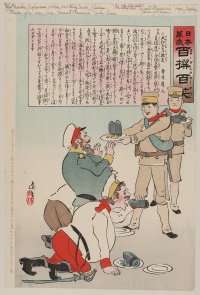 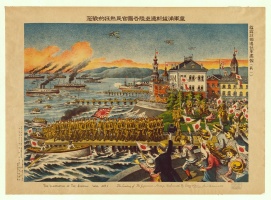 “The Landing of the Japanese Army, Welcomed by Every Nation, at Vladivostok“, print 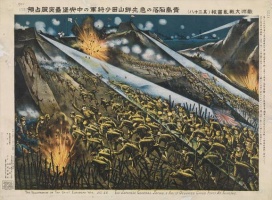