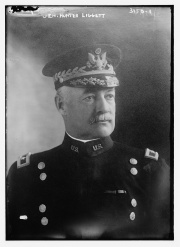 Hunter Liggett was a general in the U.S. Army. He commanded the Forty-First Infantry Division, the I Corps, and the United States First Army. He led the I Corps at Chateau-Thierry, St. Mihiel, and in the Meuse-Argonne Offensive. He was the architect of victory in the Argonne Forest.

Early Service and the Spanish-American War↑

Hunter Liggett (1857-1935) graduated from the United States Military Academy in 1879. He served as a second lieutenant in the 5th Infantry Regiment in the American west and south-east until 1897. He earned a promotion to first lieutenant in June 1884 and to captain in June 1897. At the commencement of the Spanish-American War, Liggett accepted a commission as major of volunteers with the 31st Infantry Regiment. Although he missed the Cuban campaign, in June 1899 Liggett and the 31st transferred to the Philippines where he met future American Expeditionary Forces (AEF) commander John J. Pershing (1860–1948). In June 1901, Liggett returned to the regular Army and earned a promotion to major the following year. From 1903 to September 1907, Liggett served as adjutant general of the Department of the Lakes headquartered at Chicago. Liggett left the Department of the Lakes to command of a battalion of the 30th Infantry stationed at Fort Leavenworth in Kansas. He earned promotion to lieutenant colonel in June 1909.

From 1909 to 1910, Liggett attended the Army War College. Upon graduation, he stayed on at the college, first as director and later as president, improving the school's curriculum with courses on military history, operational planning, and general staff duties. He also served as head of the War College Division, devising plans for military interventions in Mexico and Latin America. In 1912 Liggett received promotion to colonel, and in 1913 he advanced to brigadier general.

Departments of the Lakes, Philippines, and the West↑

41st Infantry Division and I Corps↑

In September 1917 Liggett took command of the 41st Infantry Division; in October they sailed for France. Liggett’s age, weight, and physical infirmities seemingly disqualified him from field service, but Pershing retained him because of his respect for Liggett‘s character, experience, and knowledge. Liggett continued to lead the 41st until 20 January 1918, when Pershing appointed him commander of the I Corps.

Soon after taking command of the I Corps, Liggett and Pershing clashed over the conduct of the war. Pershing believed the Allies had become too defensive in tactics and training. He favored an “open warfare” approach to the waging the conflict, breaking the stalemate on the Western Front through rapid movement and superior gunnery. Hoping to keep American soldiers from the trench warfare mentality that had infected the British and French troops, Pershing prescribed a training regimen that emphasized aggressiveness and individual marksmanship. Unlike other American commanders, Liggett questioned Pershing’s dictates. He felt that open warfare, while appropriate and advantageous once breakthroughs were achieved, was unsuitable for existing battlefield conditions in France. Liggett defied Pershing’s dictums, developing and implementing a modified version of open warfare, and Pershing acquiesced. Liggett spent the next six months training his units for operations against entrenched positions.

On 4 July 1918, Liggett and the I Corps entered combat at Chateau-Thierry, helping the French Sixth Army blunt the German advance at the Second Battle of the Marne. He directed operations in the subsequent Aisne-Marne Offensive, succeeding in driving the Germans back across the Ourcq and Vesle rivers. The I Corps later went on the defensive in Champagne and Lorraine.

On 12 September 1918 the I Corps, now part of the United States First Army, began operations in the St. Mihiel Offensive, reducing the St. Mihiel Salient by 20 September. On 26 September Liggett and the I Corps commenced the Meuse-Argonne Offensive. Liggett executed a cross-front counterattack using the Eighty-Second Division that finally broke German resistance in the Argonne Forest and cleared the forest on 10 October.

Resisting pressure from Pershing to continue the advance, Liggett spent the remainder of October resting, refitting, and reorganizing his units. He instituted patrols to round up stragglers, visited troops to reinvigorate flagging morale, and urged division commanders to strengthen military policing. He reorganized the General Headquarters to tighten coordination between artillery, air service, and infantry. On 1 November the First Army resumed the offensive, advancing in all sectors against dwindling German resistance up to the armistice.

Liggett continued to command the 1st Army until its demobilization in April 1919. On 30 April he assumed command of the 3rd Army, then on occupation duty at Koblenz, Germany. In June 1919, he returned to the United States to resume command of the Department of the West. On 21 March 1921 Liggett retired from active duty with the rank of major general. Partisan politics and postwar retrenchment colluded to deny Liggett his wartime rank — an oversight corrected in 1930, when Congress promoted him to lieutenant general. Liggett wrote two memoirs of his wartime service: Commanding an American Army: Recollections of the World War (1925), and A.E.F.: Ten Years Ago (1927).