Henri Barbusse published the emblematic French war novel Le Feu in 1916. Given the context of its first publication, Le Feu was not critical of French propaganda; rather, it was part of a change in propaganda after the battles of Verdun and the Somme.

Often considered to be the first antiwar novel of World War I and a “success in contradicting wartime propaganda,”[1]Le Feu by Henri Barbusse (1873–1935) first appeared as a serial novel in the daily L’Œuvre starting in August 1916. It won the important Goncourt literary prize in November 1916, after being published as a book. The otherwise rather severe French war censorship practices left the book form of Le Feu unscathed. It is hard to imagine that censorship would allow an openly antiwar novel to be published the same year as the great battles of the Somme and Verdun; therefore, we can assume that by the end of 1916 the novel was not perceived as such by its readers.

The book’s full title, Le Feu. Journal d’une escouade. Roman (The Fire. Diary of a squad. Novel), hints at a strange mixture of genres. While the word “journal” (diary) implies an authentic report by an eye-witness, the “roman” (novel) leaves the degree of authenticity open to speculation. The novel is divided into twenty-four chapters, the first and the last of which, “Vision” and “Aube” (Dawn), provide a rather static frame with visionary choral scenes. “Vision” shows us soldiers from all belligerent nations recovering from their wounds in a sanatorium in the Alps, near the Mont Blanc. They unanimously condemn the war, but all of them wish France to be the winner, even an Austrian and a German soldier. They all want to stop the war but only after France has won, and there are even voices, repeated throughout the novel, that regard France’s part in the war as a continuation of the French Revolution.

A War to Set Germany Free↑

The French army will bring peace and freedom to the enslaved German and Austrian peoples; until this goal is reached, the war has to continue to be fought under all circumstances. This is the central message of Barbusse’s novel, and the final chapter, “Dawn,” repeats it in an apocalyptic landscape. In this chapter, mud-covered uniforms erase all differences between German and French soldiers; all agree that they do not want to be heroes but humans, and also that all the killing of the present war will count almost nothing if it leads to progress.

Chapters two to twenty-three depict scenes from daily war life as seen by the members of the charismatic Corporal Bertrand’s squad. In another visionary moment, Bertrand sees a peaceful future symbolized in the name of German socialist leader Karl Liebknecht (1871–1919), but in order to reach this future, he and his squad will have to go on fighting at all costs. The German and French soldiers are both represented as victims without any warlike ambition, whereas the French colonial troops are depicted as “real” soldiers who enjoy killing for killing’s sake.

Barbusse claimed that everything he described was either seen or heard by himself or by witnesses he could trust. However, he also explained on several occasions before 1918 that his main goal was to make sure French soldiers would go on fighting even though the war could no longer be represented as a quick and easy fight, as it had been in summer 1914. Thus, the aim of showing the cruel and dirty aspects of war in 1916 was not mainly, as many readers after 1918 assumed, a critical one; rather, it was part of a declared propagandistic effort embroidered with humanitarian and socialist elements.

At the end of the war, Barbusse’s conversion to communism made the propagandistic aspects of his novel seem inconceivable. The scenes of cruelty and destroyed bodies and landscapes were now read out of their martyriological context and interpreted as an accusation of war per se. Further, Barbusse became a “symbol and model of the revolutionary poet” (“Sinnbild und Vorbild des revolutionären Dichters”) according to German pacifist and dramatic author Ernst Toller (1893–1939). As recently as the 1995 biography by Philippe Baudorre, Barbusse has been represented as the “enemy of the Great War” (“Le pourfendeur de la Grande Guerre”).[2] Even first attempts, in 1989, to reinsert Le Feu into the historical context of 1916 were attacked by the Barbusse community.[3] 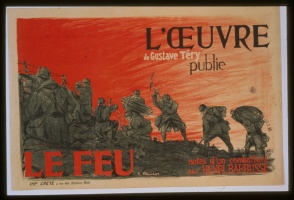