The Langemarck Myth refers to the transformation of a WWI battle, in which the Germans suffered heavy losses, into a parable of nationalist martyrdom. The original battle between German and British troops took place on 10 November 1914 near the Belgian town Langemarck, north of Ypres, and marked the end of mobile warfare on the Western Front.

After the German retreat on the Marne, both warring parties tried to envelop the opponent. The "race to the sea" in October and November 1914 extended the front to the North Sea coast. In Flanders, the German Oberste Heeresleitung (OHL, Supreme Army Command) tried to outflank the British Expeditionary Force (BEF). It relied on four hastily embattled reserve corps, which consisted primarily of old, experienced reservists and militia as well as of volunteers, some of them pupils and students. After the initial setbacks experienced while attacking the British trenches, hopes for the success of any further attacks were illusory. Despite this, Chief of Staff Erich von Falkenhayn (1861-1922) ordered one last push as a way of gaining better defence positions and of preserving German military prestige. The German reserve units attacked the well-ensconced positions of the enemy between Bixschote and Noordschote over open terrain on 10 November 1914 and suffered heavy losses. More than 10,000 German soldiers were wounded or killed in a battle which had no military significance. To conceal the disaster on the Western Front, the OHL published a famous official communiqué on 11 November 1914, which misleadingly announced that: "Westwards Langemarck young regiments rushed forward under the song 'Deutschland, Deutschland über alles', advancing against the first line of the enemy and taking it."[1]

The misleadingly formulated report from the OHL was printed by numerous German daily newspapers. This skilful manipulation of German public opinion ensured that a myth about the battle arose quickly. The losses of Langemarck came to symbolize German heroism, patriotism and a spirit of sacrifice, accentuated in the increasingly embellished accounts of how German troops had assaulted English machine guns without cover. A military fiasco was thus reinterpreted as a moral victory. The assertion that the German regiments had sung the "Deutschlandlied" while attacking played the leading role in the genesis of the myth. This song represented the unity of the German nation in a fight for life and death. As martyrs, the Langemarck myth emphasized, German soldiers had dauntlessly attacked the enemy, heedless of their own lives, with the song of Germany's martial unity on their lips.[2]

After the German defeat in 1918, the myth functioned primarily as a retrograde rhetorical tool for politically disoriented bourgeois conservatives. Since the OHL had spoken of "young regiments", the German reserve corps were falsely assumed to be purely pupil and student units. The German student body in particular campaigned for a Langemarck commemoration day, which served as a counterpart to the official Weimar commemoration and thus as an anti-republican public ritual. Annual Langemarck celebrations and the inauguration of a cemetery in 1932 offered the opportunity to pay homage to Germany's eternal youth: the hero who sacrifices his life for the nation and, in return, gains immortality in the collective consciousness of the nation, which preserves his legacy.[3] Death on the battlefield was thereby transfigured into an act of nationalist martyrdom. At the same time, the myth offered a heroic template for the nationalist youth of inter-war Germany, who were enjoined to emulate the soldiers of Langemarck.

The battlefield myth was finally exploited by the National Socialists, who foregrounded the national, heroic element. The separation of the myth from its original bourgeois-conservative character was never entirely successful, however, so that it was never perceived as specifically National Socialist in nature. Attempts to revive the myth after 1945 nonetheless failed. Given the events of the Second World War, the myth of nationalist martyrdom had lost its lustre. 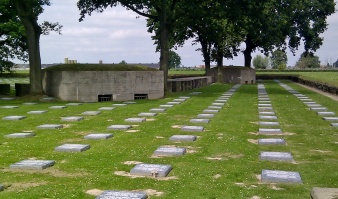 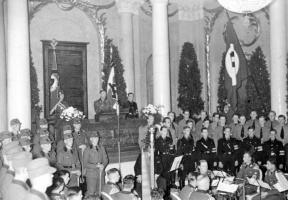